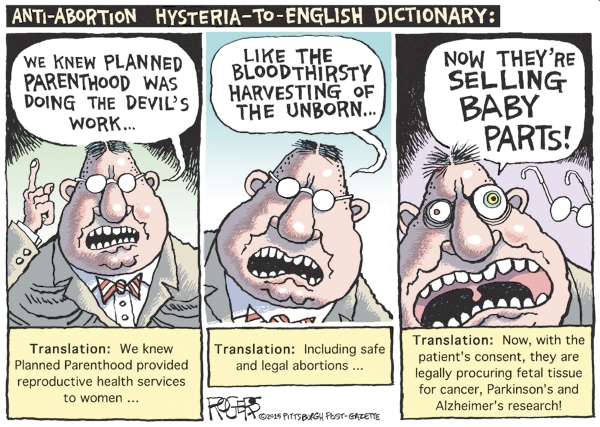 If you oppose abortion and you’re not ready to promote the most effective ways of preventing unwanted pregnancies, you’re not serious. If you call for “defunding” Planned Parenthood — as virtually the entire Republican Party does — you are attacking a leading purveyor of contraceptives and information about how to use them for women of limited economic resources.

With one careless comment, Jeb Bush revealed a fundamentally indifferent attitude toward half the U.S. electorate.

“I’m not sure we need half a billion dollars for women’s health issues,” he said in a speech at the Southern Baptist Convention in Nashville, Tenn.

It was a throwaway aside in a longer blather about defunding Planned Parenthood, and one imagines that no sooner were the words out of his mouth than his cringing consultants were drafting a clarification.

The inevitable statement soon followed, admitting he “misspoke” and adding that “there are countless community health centers, rural clinics and other women’s health organizations that need to be fully funded.”

Too late. The game was on. Hillary Clinton blasted back, “When you attack women’s health, you attack America’s health.”

I don’t believe Bush misspoke. There’s something about abortion he wishes to ignore: Abortion is a women’s health issue. You cannot separate abortion from this context.

Oppose it or not — and I do — abortion is a medical procedure that ends an unwanted or health-threatening pregnancy. If we want to encourage the trend toward decreasing numbers of abortions in this country — and no one in their right mind wants to see more of them — we need to bolster women’s reproductive health services. That means ensuring wide access to sex education and contraceptives. (It also means honestly admitting that an overwhelming majority of Americans accept that abortion should be permitted when a pregnancy is the result of incest or rape, or when the health of the mother is threatened.)

If you oppose abortion and you’re not ready to promote the most effective ways of preventing unwanted pregnancies, you’re not serious. If you call for “defunding” Planned Parenthood — as virtually the entire Republican Party does — you are attacking a leading purveyor of contraceptives and information about how to use them for women of limited economic resources. You’re also threatening to shut down 700 clinics that provide crucial preventative health measures like pap smears and refer women for mammograms.

About 85 to 90 percent of Planned Parenthood’s work is providing these basic health services, often to low-income women without access to health insurance. That’s according to analysis of the organization done by PolitiFact. Abortions add up to about 3 percent of the organization’s services, and they are not funded with federal money.

A recent vote in the U.S. Senate to defund Planned Parenthood, which failed, called for redirecting the monies to other women’s health facilities that did not provide abortions. There are far too few such clinics to meet the need. Moreover, the effort misunderstands how Planned Parenthood receives $528 million annually: mostly through Medicaid reimbursements and Title X family planning grants.

The plain truth is that the Republicans who wish to destroy Planned Parenthood  really don’t care that the bulk of its work has nothing to do with abortion. Nor do they care about standards of accuracy in the accusations they make against the organization.

They have worked hand-in-glove with the Center for Medical Progress, an anti-abortion group inspired by the ethically dubious video techniques of conservative activist James O’Keefe. This group set up a phony front company and then lured Planned Parenthood officials into secretly videotaped conversations about providing fetal tissue for research. The group then released videos selectively edited to suggest that Planned Parenthood was in the illegal business of selling fetal tissue.

The bogusness of this charge is patently obvious when one views the unedited tapes, but that matters little to opportunists who promise all sorts of congressional inquisitions. Fine. Hold hearings. See what you find. My guess is that it will be zilch.

The American public needs to know that these new anti-abortion activists are picking up the cudgels of the folks that brought us the so-called Summer of Mercy protests that required federal marshals to restore order in Wichita, Kan., in the 1990s. Tactics used to include clinic bombings and harassing any woman who set foot near a clinic, regardless of what services she might be seeking.

That phase of the movement failed, but it never went away. In 2009, Kansas abortion doctor George Tiller was shot dead at his church.

Pro-life activists have figured out that it’s better to co-opt the Republican Party than to engage in terrorism. That’s progress. Unfortunately, disingenuous attacks on women’s health care purely to court votes do no favors to either women or unborn babies.

Farmers have borne the brunt of this summer’s dry conditions in Rowan County — farmers and anyone else trying to... read more