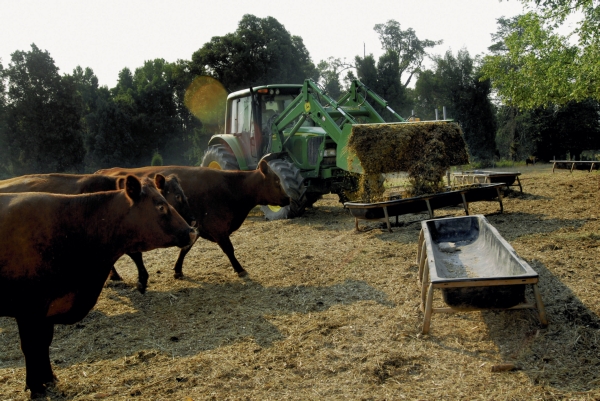 Wayne HInshaw/ Salisbury Post In summer 2007, the drought was so severe that Kevin Huffman of Goodman Lake Road had to feed his red Angus cattle hay and silage — something usually not done until winter.

Farmers have borne the brunt of this summer’s dry conditions in Rowan County — farmers and anyone else trying to grow green plants.

Fortunately for customers of Salisbury-Rowan Utilities, the Yadkin River is flowing along pretty well, affected by the dry conditions but not devastated. The river’s flow has decreased from 751 million gallons per day last month to 622 million; the flow would have to fall another 300 million gallons a day for the utility to call for voluntary water restrictions. The utility uses about 10 million gallons a day. Cutting back on water use now might reduce your water bill, but it’s not going to help regions where the drought has caused worried cities to call for water-use restrictions.

Perhaps there’s some consolation in knowing that it could be worse. Droughts are a part of North Carolina weather, just like hurricanes, floods and other natural disasters. Many people will never forget 2002 when High Rock Lake virtually dried up from a combination of dry weather and Alcoa’s drawing down of lake levels. A more severe drought hit the area in 2007.

To date, Rowan’s rainfall is about 7 inches below average, according to Weather Underground. Storms are said to be moving into the area as this is being written Monday evening. If Mother Nature wants to contradict an editorial bemoaning dry weather, that would be fine. We’ll write more of them.