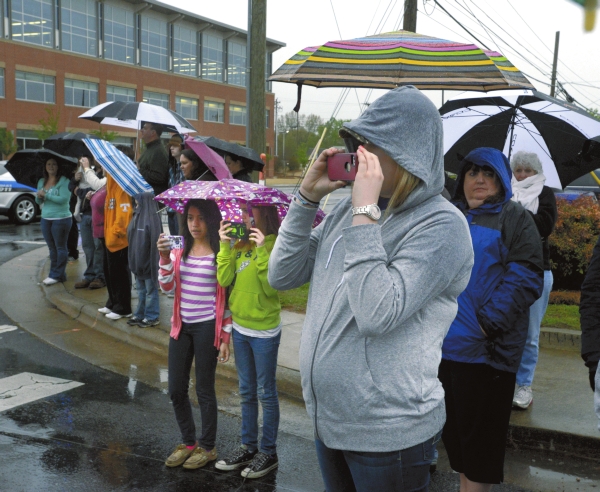 Anna Lippard on the right and Kelly Kernandev and Kayla Jenkins photograph the procession of Mustangs rolling into Kannapolis during the 50th Ford Mustang Birthday Celebration organized by the Mustang Club of America. Photo by Wayne Hinshaw, for the Salisbury Post

Wayne Hinshaw: Are smartphones getting between you and life?

More people than ever are taking photos because their smartphones are always with them.  There are more photos being made in one year than were made in years and years added together before smartphones.

That has to be good, doesn’t it? More captured special moments in life. More memories of the kids. More keepsakes from trips and vacations. Maybe we are actually seeing more of life that ever before. Maybe we are more aware of the butterflies fluttering past us. Maybe we are seeing and experiencing more awareness, since seeing is a state of the mind.

But wait a minute.  Really?

I recently discovered a study by Joseph Grenny and David Mayfield released back in March that seems to speak negatively about our smartphone photos. The men are coauthors of the New York Times bestseller “Crucial Conversations.”  They surveyed 1,623 people about their use of smartphones and  social media and how it is affecting our daily lives. Their conclusion is that we are a “social media-obsessed society.”

Here is the big stumbling block, from their study, that should worry you.  “Fifty-eight percent of the people believe that posting the perfect picture has prevented them from enjoying life’s experiences.”

While going about your daily life, you have become more concerned with getting a great phone photo at a ballgame or your child’s school play so that you can share it with social media. It has kept you from really enjoying and mentally absorbing the wonderful evert in front of you. You have become so obsessed with the smartphone, your attention has been diverted from the important things in life.

They are in a trance-like state when they raise that phone to their eyes.

There can be very personal, intimate moments that professional ethics cause even the toughest news photographer to lower his or her camera in respect of the moment.

As a news photographer, it is not unusual for me to run into other aggressive news photographers, all pursuing photos as part of their jobs. Most do observe a certain ethic that we are all there doing our jobs, and we all need to get the photos, so back off.

Of the respondents in the survey, 14 percent admit they have risked their own safety to get a smartphone image for social media. Some folks have lost their lives trying to capture those “special selfies” with wild animals.

Mayfield says that people with smartphones have become trophy hunters in trying to take photos to remember the moment.

A music performer said in a National Public Radio interview that his fans had become so rude, wanting him to be in selfies with them. He said he loved to meet his fans and shake hands with them. He said shaking hands was more personal. But fans become upset if he refuses selfies. One fan said he needed a selfie so his friends would believe that he met the performer in person. He told the fan he needed new friends if they all thought he was a liar when he told them he had received a hand shake instead of a selfie.

Mayfield concluded that those who were constantly working so hard to get photos for their social media were really people with a very “low personal happiness” in their lives. These are the least happy people using their devices looking for trophy photos.

Maybe they should limit their social media usage and become more aware of having a pleasant life. Enjoy life’s experiences.

Think about what you are doing with your smartphones and social media. I don’t know if the Grenny and Mayfield study is accurate, but it certainly is cause for concern and thought.

Before you dive in front of the next truck for a selfie, think. You might just break your phone.

The official kick-off event of the Republican presidential primary debate season came and went, and with few surprises, it seems... read more