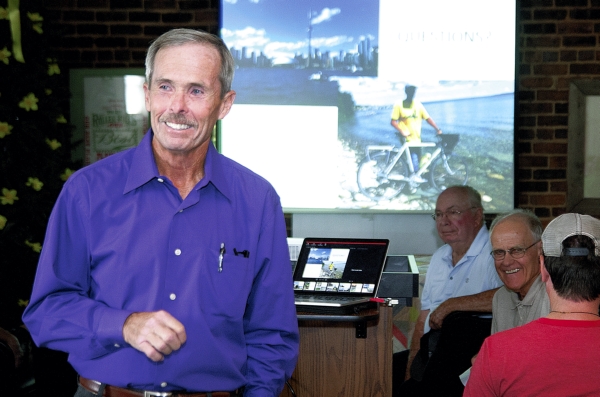 Freeze recently returned from weeks of pedaling on a more-than 2,300-mile cycling adventure, his third long-distance journey. On Sunday, he talked to several dozen people at the China Grove Roller Mill’s regularly scheduled open house about the people and places from his most recent trip — Mobile, Ala., to Toronto, Canada.

Freeze admitted he sometimes gets restless when not taking long trips on his bike. This year, he began thinking about his next trip before the current one ended.

“On the day riding into Toronto, I couldn’t keep the thought out of my mind about what the next trip might be,” Freeze said.

Now that he’s back in Rowan County, Freeze said he often wakes up in the middle of the night, thinking about riding his bike. It’s always the same scene that pops into his mind. He’s at a crossroads and doesn’t know which direction to go.

Freeze said he’ll likely take another long summer trip in 2016 and, perhaps, a shorter one before that.

His trip from Mobile, Ala., to Toronto began in late June and ended a few days ago. Throughout his journey, Freeze wrote daily articles about his experiences that were published in the Salisbury Post.

At the China Grove Roller Mill, Freeze showed a slideshow that documented nearly every aspect of his ride. He showed pictures of historical landmarks, kind or interesting people and comical sights from his journey.

Freeze recalled one point in his journey where he couldn’t decide which road to take. In the distance, he spotted a police car and decided to ask the officer for directions. The car was parked in a nearby front yard.

It was immediately apparent, Freeze said, that the car hadn’t been moved in weeks or months. Grass had begun to grow up around the side of the police car.

He also talked about crossing into Canada. Because he was on a bike, Freeze said he was able to move immediately to the front of the vehicle line at border-crossing checkpoints. Cars, meanwhile, had to wait for multiple hours, in some cases, before crossing the border.

After crossing into Canada, Freeze said the border guard recommended a faster route, which involved going the wrong way down a one-way road. The guard said there wouldn’t be much, if any, traffic on the road, Freeze recalled.

The guard was right. Freeze said he never saw a car on the road.

The border guard was one example of the many kind people Freeze recalled meeting on his journey. At one point, a man brought Freeze groceries after helping him find a hotel. A man named Andrew Ross gave Freeze a place to stay and arranged to help Freeze ship his bike home.

Freeze will be writing a book about his recent adventure. There’s no title for it yet.

Wayne Hinshaw: Are smartphones getting between you and life?

By Wayne Hinshaw For the Salisbury Post More people than ever are taking photos because their smartphones are always with... read more