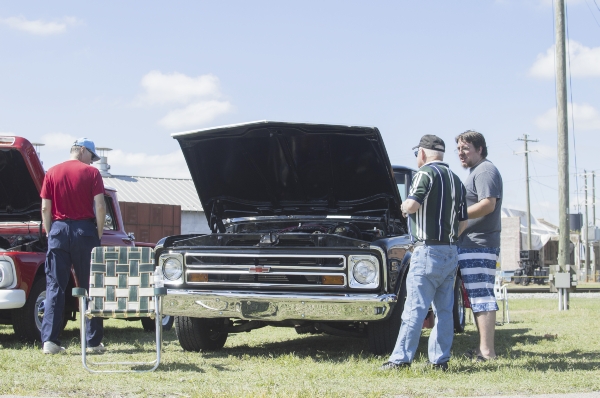 Josh Bergeron / Salisbury Post - Eric Boucher (right) talks about his truck during a car show at the N.C. Transportation Museum. Boucher, 17, helped restore the car with his grandfather.

There’s nothing quite like restoring an old car, says 17-year-old Eric Boucher.

After countless hours of work, there’s one magical moment — turning the key to see if it starts.

For Boucher, that moment came one month ago, when he wrapped up restoration work on his family’s 1968 Chevrolet truck. For decades it had been in the family. On Saturday, Boucher took it to the N.C. Transportation Museum as part of a car show dedicated to General Motors vehicles.

The transportation museum is known for its rich history in train transportation. Several times each year, however, the facility hosts car shows. Saturday’s show included 74 cars, making it the largest one specifically dedicated to General Motors in the museum’s history. A recent show dedicated to Ford cars drew more than 100 vehicles.

As attendees browsed through the rows of cars, casting a vote for their favorite, car owners frequently stopped and chatted to describe features of the vehicle.

As Boucher chatted with the attendees, he couldn’t help but grin. He’d spent countless hours with his grandfather restoring the vehicle. After work, Boucher said he’d often spend six or seven hours on restoration work.

The Chevrolet truck wasn’t new when it entered Boucher’s family. Boucher estimates that his grandfather purchased the truck in the late 1970s or early ’80s. It soon became the main family vehicle. Boucher’s grandfather and grandmother frequently used it for daily commutes. It was his grandmother’s truck, Boucher said. It was later passed down to other family members for daily use.

But before restoration began, Boucher’s truck looked like “it had seen some stuff,” he said. The truck bore the bruises of a fender bender and a fire. It still ran, though.

On Saturday the vehicle looked as if it was just a few days out of the factory. Since the restoration, the truck has driven just over 110 miles, he said. Boucher, however, listed a few more items he’d like to add or repair before he was satisfied.

Boucher said he couldn’t be more proud of the final result of the hard work needed to restore the truck. With a smile from ear to ear, he described the magical moment when he turned the key in the ignition and it fired up.

“It’s like having a child for the first time,” he joked. “It’s so rewarding to spend all that time and money and know it’s been worth it.”

Chillcott looks to make positive difference on Spencer board

In her first bid for elected office, Spencer resident Sylvia Chillcott says she hopes to make a positive difference and... read more