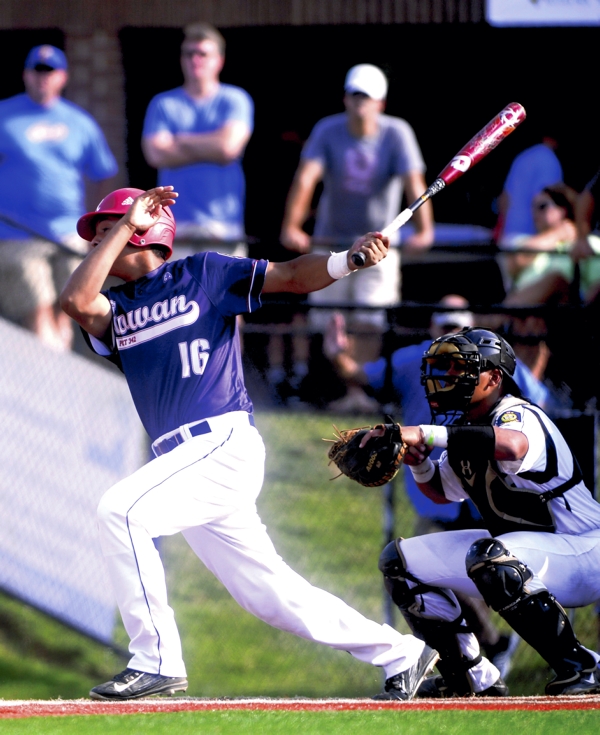 ASHEBORO — Changeups, not 90 mph fastballs, ended Rowan County’s American Legion season on Saturday evening at Asheboro’s McCrary Park.
Host Randolph County’s Reece Daniel, a right-handed graduate of Southwestern Randolph who is headed to Wingate as an infielder, threw dozens of changeups and went the distance in a Southeast Regional elimination game.
“I got big outs on changeups,” Daniel said. “I got their best hitters to roll over on changeups.”
The numbers were numbing. Rowan (32-8) struck out only twice, but it grounded out 19 times, managed only four hits and lost 3-1.
“We weren’t nervous and I don’t think we pressed,” Rowan coach Jim Gantt said. “Guys were trying, but they got frustrated. Baseball is crazy, and some days it just doesn’t work out.”
Off-stride and out-of-kilter, Rowan fell to a team it probably has a closer relationship than with any other American Legion program. There’s similar tradition, similar ballparks and similar coaching philosophies.
“We beat friends,” Randolph Post 45 coach Ronnie Pugh said. “Just a really well-pitched game by Reece and by (Rowan lefty) Hunter Shepherd as well. Jim Gantt and Rowan had an unbelievable year. They’ve got a great team and they came into this tournament really hot. It was just our day. I was a little surprised how well we played coming off a very tough loss (3-2 to South Carolina) Friday night.”
Randolph’s first inning started single-single-single-walk, but Shepherd wiggled out of it with just one run scoring. He got a foul popup, a strikeout and a flyball.
Randolph (28-16) made it 2-0 in the third when Caleb Webster led off with a double and eventually scored on a sac fly by Evan Wall.
Pugh pointed to a play between the double and the sac fly as the key to that huge second run.
“Cameron Morrison was behind in the count but he fought off a tough pitch and got a groundball that moved the runner to third to set up the sac fly,” Pugh said. “It’s always the little things.”
By the fourth inning, Shepherd had everything working and was wiping out Randolph hitters.
Then in the bottom of the sixth, Rowan got on the board. Jeremy Simpson walked to lead off and was at third base with two men out when Juan Garcia hit a slicing drive inches beyond the reach of Walls, the right fielder, as he sprinted toward the foul line. It was the fourth RBI of the tournament for Garcia and 48th of the season. He finished his first Legion season — he plans to return — with 18 doubles.
“This was the seventh time we’ve played Rowan and we haven’t ever seen Garcia hit a ball there,” Pugh said. “We had our right fielder playing him toward the gap.”
The bottom of the eighth, with Rowan trailing 2-1, was the critical inning. A tiring Daniel would be facing Rowan’s hottest hitter — leadoff man Harrison Baucom — as well as .400 hitters Garcia and Heath Mitchem.
“I hadn’t pitched against Rowan, but the thing I’d learned from watching them is that they can all hit — 1 through 9,” Daniel said. “Against guys like that, you’ve gotta locate every pitch.”
Baucom got a hit — his second of the day and eighth of the tournament — to begin the eighth. Michael Caldwell sacrificed Baucom to second, and Rowan’s chances hinged on the next two batters — Garcia and Mitchem. Pugh ambled to the mound for a conversation with Daniel.
“Garcia is their best hitter, but we didn’t really talk about pitching around him, not with the big lefty (Mitchem) next,” Daniel said. “We just talked about staying calm and not making a mistake that Garcia could hit out of the park.”
Daniel got Garcia to fly out routinely to center.
“We were facing a pitcher we really should’ve hit better than we did,” Garcia said. “I went up there looking to get a hit, but I didn’t have a good at-bat.”
Daniel fell behind in the count against Mitchem but wisely walked him with a base open. Then Daniel got Riley Myers to ground out to end the inning.
Clay Richardson’s two-out double led to a Randolph run in the ninth and a 3-1 lead.
Then Rowan went down quietly — 1-2-3 — against Daniel in the ninth.
“We put it in play and we didn’t strike out,” Baucom said. “We hit hard groundballs all day, but we hit balls at ’em. That’s how the dice rolls, and our luck ran out.”
Shepherd retired 19 of 20 hitters in a dominating stretch but still took a loss in a game played in under two hours.
“Shepherd was outstanding, but so was Randolph’s pitcher,” Gantt said. “This season was a great experience for all of us. I enjoyed this group and I hate to see it end.”
Randolph will play Chapin-Newberry on Sunday at 4:30 p.m. and will have to knock off the unbeaten South Carolinians twice to advance to the World Series in Shelby.