A royal trip to Andorra, the magical place you’ve never heard of 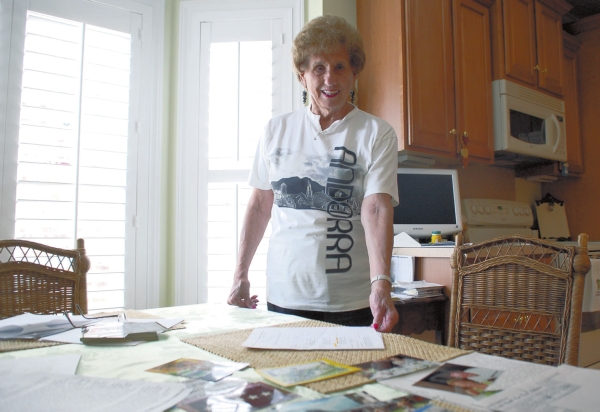 Mark Wineka/Salisbury Post Wearing her T-shirt from Andorra, Dot Gandy of Salisbury looks over the photographs and notes from her June 1-12 European trip that included a day's tour of her grandfather's homeland.

SALISBURY — As she spreads out her photographs, maps, books and notes from her June trip to Europe, Dot Gandy can’t hide the hint of frustration in her voice.

“I have so much stuff here I need to put together,” she says.

Gandy picks up a piece of paper that actually wasn’t from the trip. It’s her daily devotion, and she has underlined the last sentence.

“Remember that you are royalty in my kingdom,” the devotion says.

Gandy smiles, because that was the main reason she and her sister Charlene Torer of Highland Heights, Ohio, and eight other members of their family made the trip to Europe. Royalty.

They wanted to see Andorra, the home of Dot and Charlene’s late grandfather George Andor.

“I was always told that we were of royalty, and our Grandpa George Florean Andor, as we knew him, came from the principality of Andorra,” Dot says. “He came from a very wealthy and royal family.”

Or so their late Aunt Florence had always told them. “It was always her that kept us up on our grandparents,” Dot says. “She lived and cared for them always and knew all the history.”

When Gandy tells people part of her European trip included a visit to Andorra, they usually say they’ve never heard of the place.

Wedged between Spain and France, Andorra is a jewel of a country — a principality, really —  that lies in the Valleys of Andorra in the heart of the Pyrenees. It has snow-capped mountains and sparkling, snaking rivers through its valleys.

Andorra covers only 468 square miles and has a population of 84,000. But its people are happy and hearty. Andorrans have the fourth highest life expectancy in the world.

Andorra’s agricultural commerce revolves around sheep, but its biggest industry is tourism, especially as it relates to skiing. The primary language is Catalan; the religion, at least 90 percent Roman Catholic; the currency, Euros; the government, a constitutional dyarchy.

Andorra has a parliament democracy headed by co-princes: the Bishop of Urgell and the president of France. Its biggest holiday, Our Lady of Meritxell Day in September, honors the patron saint of Andorra.

After Dot and her family members landed in Barcelona, the only way to reach Andorra was by vehicle. The family arranged for their own van and personal guide.

“You think about it being a nothing place,”  Gandy says, “but it appeared to be so much bigger and alive with people. … It was very touristy, and everybody goes there to ski.”

The family was trying to visit five different countries during their June 1-12 trip, so they only set aside one day and an overnight stay in a five-star ski resort hotel in Andorra. They did some shopping and sightseeing in the capital city of Andorra la Vella. They traveled to the top of a mountain.

But there was no time for any kind of genealogical research. Besides, Dot and Charlene didn’t even know what town or village their grandfather was from.

“We really need to do more research on it,” Dot says, and she knows it will have to start with her grandparents’ name of  “Andor,” which according to Aunt Flo, had been shortened from “Andorra.”

Aunt Flo told her nieces when political unrest came to Andorra around the turn of the century, it forced George and his brother, John, to flee the country. George ended up in Romania, where he met Anna Faulk — Dot and Charlene’s grandmother. But Anna was a commoner, who feared she would never be accepted back in Andorra.

“He (George) wanted to go back because of some buried treasure and said he could walk right back to it,” Gandy remembers. “Too bad we didn’t know where when we were there,”

George’s brother John had gone to the United States, where he opened up a bar in Akron, Ohio, and he implored George to join him, “because he was making so much money, and he could do the same,” Gandy says.

“In Andorra, they used to smuggle liquor over the border, so they were used to the liquor business, I guess,” Dot adds.

George Andor took his brother’s advice and opened a bar in Gary, Ind., called “The Square Deal.” He later arranged for Anna to come to the United States, and Dot’s mother, Anne, was born in Indianapolis, Ind.

George and Anna Andor moved their family — they would have three more girls — to Akron and joined John in his bar business. Dot remembers going to see Uncle John and Grandpa George at the bar.

“My grandpa made lots of money and bought my mother and her sisters lots of furs and jewelry, and they had beautiful clothes,” Gandy says.

But one day Uncle John fell down the steps while carrying a box of liquor and died from his injuries. It devastated George, who thought it was the work of the devil, punishing them for making so much money selling liquor.

George Andor started going to the Romanian Baptist Church in Akron, and he came home one day on a mission to rid his house of all the furs and jewelry, “because it was evil, and it was why Uncle John had died,” Dot says.

“I have a ruby ring that my mother hid and kept, and I wear it all the time,” Gandy says.

Andor sold the liquor business and went to work for General Tire and Rubber, from where he retired. During the Depression, he had supplemented the family’s income by giving music lessons for 50 cents an hour.

“He played every musical instrument and was extremely talented,” Gandy says. “He also spoke 16 languages and dialects.”

Among her papers on the kitchen table, Gandy shows a copy of George Andor’s certificate of naturalization in the United States, which he received when he was 41. Her grandfather died in 1973 at the age of 90, no doubt taking the location of his buried treasure with him.

Gandy says her mother was always embarrassed being from an immigrant family and would not speak of her parents’ origins. “My mother never talked to me and my sisters about any of this,” Gandy says, “and if it wasn’t for our Aunt Flo, we would know nothing of it.”

Gandy and her sisters, Charlene and Nancy, always had talked about possibly going to Andorra one day. It happened thanks to the ambition and planning skills of Charlene’s daughter Norene Hosler of Cleveland, Ohio.

“She planned it all out,” Gandy says. “It was the most fascinating trip ever.”

After Barcelona and Andorra, the family visited Italy, Austria and Germany, and flew home from Munich. There was plenty of walking, but the energetic Gandy, who is 81, kept up, even on the day they walked 13 miles.

One of the more emotional stops before coming home was the Nazi concentration camp for Jews in Dachau, Germany, Gandy says.

Gandy also describes them as “a close, close family” that gets together all the time. They used to have T-shirts printed up for the summer reunions at the Gandys’ former home in Neel Estates, which included a swimming pool.

The family members also meet around New Year’s in Ohio. Gandy knows that sounds odd, going north in the winter and south in the summer, but they are a crazy bunch, remember.

Dot and her husband, Jim, have traveled all over the continental United States, Canada and Alaska. Dot also had been to Ecuador, but never to Europe before the June trip.