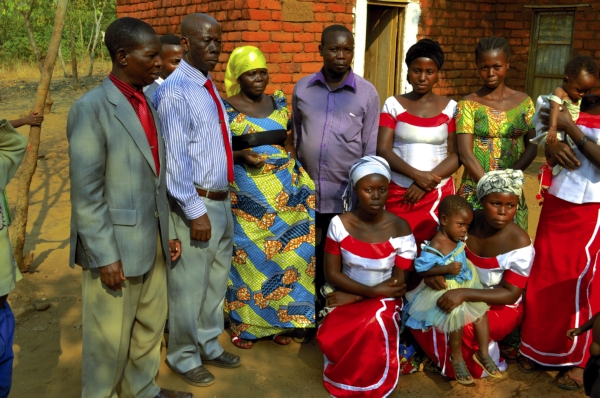 After the service at Bible Faith Church of Baraka.

405 Congolese pastors were present for the teaching and preaching which was held daily from 9 a.m. until 5 p.m. Students each received a certificate after attending classes all week.

On July 23, I made my third trip to Africa, the other two were in 2005 and 2006. I boarded the plane in Charlotte at 6 a.m. on July 23, connected in Washington, D.C. and flew by Ethiopian Airlines to Addis Ababa, Ethiopia. The destination was Bujumbura, Burundi; however, we had to detour at the last minute to Nairobi, Kenya, and then finally to our destination, after eighteen hours of flight time.

The next morning, I went to customs in order to get over the border from Burundi to the eastern section of the Democratic Republic of the Congo. Soldiers and U.N. trucks were there to remind everyone that there is military authority, a reminder that is necessary since there have been many wars there in recent years.

I met Pastor Napa Wa Msambelwa, a well-known Congolese pastor I had not seen for nine years, at which time we both took the Kivu Queen, a large boat seating 300 people, from Goma, D.R.C. to Bukavu, D.R.C. It was good to see him again. His English is flawless, and he has a  keen intelligence, a hearty laugh and is most likeable.

We rode in an older model Toyota Land Cruiser driven by Mboko Saidi, a twenty-something man from the Congo. We left from the city of Uvira, D.R.C. which is situated on the northern end of Lake Tanganyika (the longest lake in the world). The trip would take three and a half hours on a rutted road. Our destination was Baraka, which means “blessing” in Swahili and is located on the northwestern shore of Lake Tanganyika.

We were aware that the area in which we were driving was the scene of many bloody battles in which hundreds of thousands lost their lives in the Eastern Congolese Civil War about two decades ago. Every ten miles or so we would encounter soldiers. We were reminded by Napa never to take pictures of them since the consequences would not be good. I was concerned that we would encounter obstacles which would be beyond us, but I kept my trust in the Lord to see us through the week of teaching and preaching.

We stopped at a small village of thatched roofed, brick houses and were immediately surrounded by dozens of small children who cried out: “mzungu,” which translates as “white man.” The children are completely precious and they love to have their picture taken. Their smiles of joy bring tears to your eyes. Many of them have never seen a white person before, but have heard from their parents about the work of missionaries who ministered there. The adults of the village were very friendly too, and Napa translated our English with ease. The freshly-picked bananas they offered to us were a welcome gesture of friendship as we had not eaten all day.

We finally arrived at our destination in Baraka — the Construction Hotel, which seemed to be badly in need of reconstruction. Since they do not use electricity in this part of the Congo, the generator would give us about four hours of light daily, and the water was functional for only a few hours also. This would be our residence.

The only drama we had was when one night and early morning a large group of rifle-toting soldiers decided to take over and claim several rooms, a common practice in the Eastern Congo. In the middle of the night we were awakened by shouting between two soldiers; we prayed that it would end well, and it did with the arrest of one of them who was placed in jail. That morning we had a special prayer of thanks for deliverance from danger.

On Sunday we visited the Eglise de la Foi Biblique au Congo, or Bible Faith Church of Baraka. We were crammed in a small structure with an open front-end to the church. The church has brick and tree limbs for support and tree limbs to support the roof, which is a dense thatch. There were 200 people in this small structure for the more than five hours of the service! There was much singing, preaching, and audience participation. What a lively service this was — nothing short of electrifying. I was not aware that the service lasted over five hours until after the fact!

Eight people were ordained as elders and deacons and one as a deaconess. To show their appreciation, the church elders brought to us a goat and suggested that we take it on the plane to the USA! We had to suggest that it would not be the best to take the goat home, to which they replied that we could eat the goat during the time we were there. We had a good time wondering how customs in Washington would react with our attempting to get a goat through. It was hard for me to eat the meat during the week! I felt like I was eating a family pet. Goats are everywhere in Baraka and roam about at will.

405 Congolese pastors were present for the teaching and preaching which was held every day from 9 a.m. until 5 p.m. at the Free Methodist Church of Baraka. We taught them leadership, Bible study methods, the book of Romans and theology.

I had a capable interpreter who translated very well, though there were a few times he gave me a look which said he did not understand. It is impossible for them to obtain theological education in this part of the Congo, so we come to them. They received a certificate if they attended all sessions.

There were many times we were asked to present our visas, a document I made sure was always with me. After being in Baraka for two days, the news must have gotten around as we were summoned to the Baraka Security Office where once again we presented our visas, and after paying $50 for security, we continued on for the day.

Baraka only has dirt streets, and there is constant dust and sometimes the smell of smoke can be very strong. The internet cafe is possibly the only one in that part of the country. We were able to actually get online only once, for a short period of time. I did not see any TVs. Remarkably, I was able to make calls on my iphone to wife Debbie in Salisbury.

It is common to see a group of 20 or more women building fires starting about 8 a.m. and then using the cassava plant to make their favorite food, the doughy-like ugali, eaten by almost everyone there. Napa told me that they eat only one meal daily, usually about 7 p.m. They may save a portion for breakfast. He said whenever he is hungry, he just drinks more water.

Our Toyota was about the only vehicle in town; the majority ride small motorbikes or bicycles, and it is not uncommon to see three or four people on a motorbike. Many times I would see a woman with a baby on her back and a very heavy load on her head, walking effortlessly.

We left Baraka early on Saturday and began the long trip back to Uvira. After a lengthy process we were able to cross over to Burundi; in fact we coined a term for such experiences: “African process.” Another one we sometimes used was: O.I.A,” only in Africa”! We found that this helped us to vent our frustrations which occurred from time to time.

Our destination was Addis Ababa, Ethiopia in order to catch the flight to Washington, D.C.; however, we had to do a circuitous route through Uganda and Rwanda. Leaving at 10 p.m., I arrived in Washington, D.C. eighteen hours later on Sunday afternoon. I made my connection to Charlotte after going through customs, which was an excellent experience; my luggage was nearly the first to come off. This never happens!

Reflecting upon this recent experience in the Eastern Congo, I am amazed how hungry the pastors there are for the study of the Bible and knowledge of how they can be more effective in their ministries. They are a very warm people who told me many times that they love Americans and are thankful that we come to them to help and share. How different are their feelings about us compared to many other people groups globally. The people to whom we ministered have almost nothing materially, but their spiritual fortitude I found encouraging. They were a mixed group of Methodists, nondenominational, and Pentecostal; but there was unity because of their love of Christ and desire to share such to their world. Baraka — it was a blessing to have been there!

Dr. Jeffrey J. Richards lives in Salisbury and is pastor of New Gilead Church in Concord. His mission organization is Global Teaching and Preaching: globalteachingandpreaching.com

By Susan Shinn For the Salisbury Post All teachers remember their first day in the classroom — the nervousness, the... read more