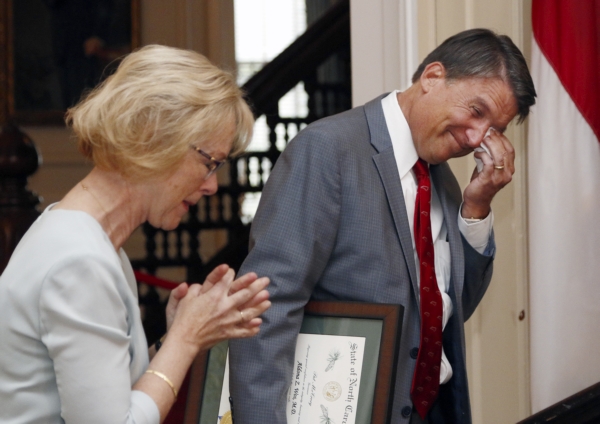 Dr. Aldona Wos, North Carolina's health and human services secretary, gets emotional as Gov. Pat McCrory wipes away a tear before awarding Wos The Order of the Long Leaf Pine during a press conference where she said she was stepping down. (Harry Lynch/The News & Observer via AP)

RALEIGH – State Department of Health and Human Services Secretary Aldona Wos announced her resignation this week, becoming the second cabinet secretary in Gov. Pat McCrory’s administration to call it quits in the span of several days.

Transportation Secretary Tony Tata abruptly announced he was leaving last week. Tata and Wos become the latest in a series of defections from the McCrory administration as the governor nears the three-year mark and faces re-election in 2016.

Since he took the helm of state government in 2013, McCrory has lost a DHHS secretary, a transportation secretary, a budget director, a public safety secretary, a commerce secretary, an education adviser and several communications employees. Also, Revenue Secretary Lyons Gray is expected to depart soon to take a seat on the N.C. Utilities Commission.

Is that a lot of lieutenants? Hard to say for sure in the rough-and-tumble world of politics. David McLennan, a political science professor at William Peace University, told WRAL in Raleigh in 2013 that turnover isn’t unusual in a new political administration. “Most people appointed to those positions are very successful coming into the administration, and they can get kind of bogged down in the political world,” he said.

There’s probably some of that going on here. But at some point, you have to wonder whether McCrory either surrounded himself with the wrong people at the beginning, is a tough boss or a little of both.

Tata, the former superintendent of Wake County schools who had been McCrory’s pick as transportation secretary from the start, resigned last week. He cited the need to spend more time with his family and career as an author of thriller novels. Tata’s departure came as rumors swirled about his possible interest in running for Congress in 2016 and questions about what McCrory thought of that.

Days after Tata’s departure, Wos and McCrory held a tearful news conference at the Executive Mansion to announce that she too would be parting ways with state government. Wos expressed a desire to get back to her family after three trying years leading the huge health and human services agency. She seemed to go out on a high note, though, with the announcement a day earlier that the state’s Medicaid program ended the fiscal year June 30 with a positive cash balance for two years running.

The first cabinet secretary to leave the McCrory administration was Public Safety Secretary Kieran Shanahan, who departed in July 2013 after eight months on the job. Shanahan also resigned on short notice and under peculiar circumstances, with questions being raised about how much side work he was doing with his Raleigh law firm while pulling in a $135,000 state salary.

The Department of Public Safety’s chief operating officer, Edward “Sonny” Masso, also resigned unexpectedly on the same day as Shanahan, after about five months in that role.

Art Pope, McCrory’s initial budget director, left the McCrory administration in August 2014, but it wasn’t a surprise. Pope took the job leading the budget office expecting to serve one year, but he remained in the role for another budget cycle.

McCrory tearfully announced the resignation of Commerce Secretary Sharon Decker last December after about two years at the state’s main job recruiting and marketing agency. Decker, who had come from the private sector, left the administration to work for a private media company.

State agency heads often complain about the high level of turnover in state government, most often citing better pay in the private sector for employee departures.

Not sure that’s what’s going on here, but because of strict personnel confidentiality laws, we might never know.

… Will the circle be unbroken? Community peace talks seek to heal old wounds The privilege walk was a great... read more