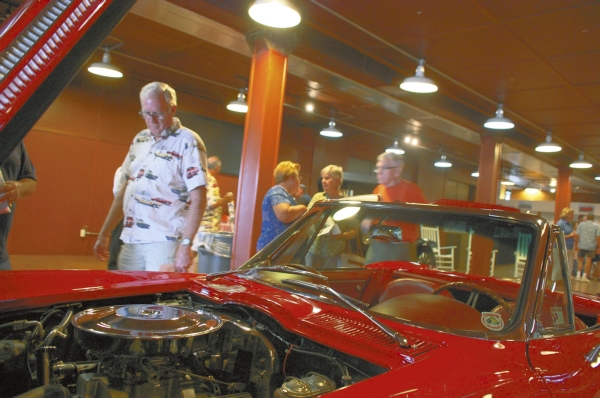 While some of the other classic cars didn’t want to chance getting rained on Thursday night, Crawford drove up to Thursday night’s History on Tap event at the N.C. Transportation Museum with his top down.

Whitney Wallace asked him if he’d like to put his car on display, and soon Crawford was backing up through a garage door, setting the brake, throwing open the hood and talking about his candy-apple-red Corvette.

Nearby, Bob and Stephanie Potter of Salisbury Wine Shop were offering the History on Tap participants glasses of Sierra Nevada beer — lager or IPA — brewed at the company’s new plant near Asheville.

Daniel Gurley was singing and playing guitar. There also was popcorn, a classic car and train trivia quiz for a chance to win $25, and down the way, in the museum paint shop, were some 21 other classic vehicles that are part of the museum’s permanent display.

“It’s a great idea to get people back and involved in history,” Robin Isenhour said of the Historic Salisbury Foundation’s summer series, which combines beer and historic places.

In June, the foundation gave those attending History on Tap an inside look at the old Empire Hotel on South Main Street in Salisbury. “It was off the charts,” Betsy Cunningham said of walking through the old hotel.

Thursday night’s event at the transportation museum, which had to be postponed in July because of the weather, was billed as “The History of Cars,” and the next History on Tap will offer a behind-the-scenes look at the historic Meroney Theater, also on South Main Street in Salisbury.

The Meroney Theater visit, again with pairings of beer, will take place from 5:30-7:30 p.m. Aug. 27. Thursday night’s History on Tap had people taking in the beer and history for the first time, while others said they already had been to the Empire Hotel event and planned to be at the Meroney, too.

“I’ll do all of them,” Josh Vernon said.

Isenhour viewed the classic cars with her sister, Rhonda Smith, and they said their late father, who died last November, would have loved History on Tap. They are already signed up for the Meroney evening and said events such as this and tonight’s Summer Sip are fun and give people more choices on things to do.

Anna Moorfield and Wallace, a HSF board member, took the reins of History on Tap and made it a successful summer series.

As he looked over Crawford’s Corvette, Acey Worthy of Salisbury couldn’t help but think of the 1957 Thunderbird he once drove in San Jose, Calif. He bought that car around 1984 or 1985, and he was asked whether it was a mid-life crisis car.

“I’ve been having mid-life crises for a long time,” said Worthy, who lost his Thunderbird in a divorce.

The Potters said they chose Sierra Nevada beers for History on Tap because they consider it a local beer. They toured Sierra Nevada’s new N.C. plant and came away highly impressed with the tour, how environmentally conscious the company was and how the owners have become involved in the community.

The tour ended with participants going into a tasting room, where they could sample eight different beers in eight differently styled glasses, Stephanie said.

The Potters take every chance they have to encourage their customers to tour the Sierra Nevada facility.

Back by his Corvette, Crawford said he has driven it to Myrtle Beach and Richmond, and no matter where he goes, the car always gets his share of looks.

“Some people stop and stare — mainly people who once had one,” he said. “… It’s fun to drive.”