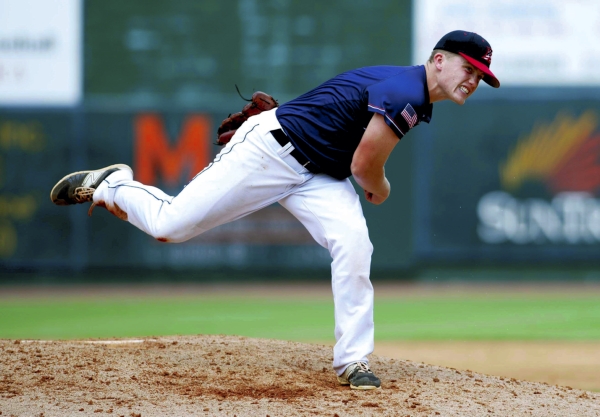 ASHEBORO — On a team of tough competitors, Rowan County pitcher Riley Myers might be the fiercest.
He was obviously frustrated early in Friday’s American Legion Southeast Regional elimination game with Columbia, Tenn., stalking around behind the McCrary Park mound like a caged lion.
But he pulled himself together and fired a complete game in a 4-3 win that kept Rowan alive in the double-elimination tournament.
Myers walked the first two batters he faced, with three of the eight balls called on borderline, at-the-knees pitches that easily could’ve been deemed strikes. Myers was hitting his spot, down and away. Catcher Dustin Ritchie wasn’t moving his mitt more than an inch, but Myers wasn’t getting positive results.
The toughest part of the equation for Myers, normally Rowan’s cleanup hitter, is that he doesn’t bat when he pitches. He wasn’t going to be able to contribute offensively, so it was killing him that he wasn’t getting the job done on the mound.
Ritchie strolled out to the bump for a brief chat and told Myers to take a deep breath and relax, but Myers had so much adrenaline pumping that it was hard for the Central Carolina Conference Pitcher of the Year to get settled in.
“I thought about half those balls to the first two guys were strikes,” said Myers, MVP of the recent state tournament. “I got a little frustrated. Then I got angry.”
Ritchie threw out the leadoff man trying to steal third. That helped, but Myers still gave up a first-inning run and Rowan was in a quick hole.
Rowan was down 2-0 after the top of the second inning. A throwing error by Myers contributed to the Tennessee champs’ second run.
“I came to the dugout all angry, and Coach (Jim) Gantt talked to me,” Myers said. “He told me I just needed to slow down. It was going to be OK.”
Myers did calm down. Then he got on a roll. He worked a quick, scoreless third inning, and then his teammates made it a brand new game in the bottom of the third when Myers’ future Catawba roommate Heath Mitchem stroked a two-out, two-run single.
“That was one of those situations that’s tailor-made for Heath, and he always seems to come through,” Myers said. “That hit was big and got us back in it. Then we started playing some good baseball.”
By the fourth inning, Myers was locked in. Tennessee went down 1-2-3.
And then it was 1-2-3 again for Myers in the fifth.
Myers and crafty Tennessee pitcher J.D. Davis were working so quickly and disposing of hitters so briskly that the game was barely an hour old when it reached the sixth inning.
Myers allowed a run on two hits in the sixth, but a double play helped him in the seventh, and he helped himself with two strikeouts during a dominating eighth frame.
“I just kind of kept grinding — and so did the team,” Myers said.
Rowan showed a lot of patience to rally in the ninth and made Myers (7-0) a winner one more time.
“Riley did get frustrated early,” Gantt said. “But he always competes. He kept battling and he gave us a chance to win.”
Myers allowed seven hits, but after that challenging first inning, he didn’t walk a single batter. He struck out five Tennessee hitters.
Had the game gone to extra innings, John Owen would have relieved Myers and taken the mound for the 10th.
“I don’t think I threw that many pitches and I didn’t want to come out,” Myers said. “But I also knew I’d given it all I had.”
It was enough.