Too much Hawkins for Rowan County 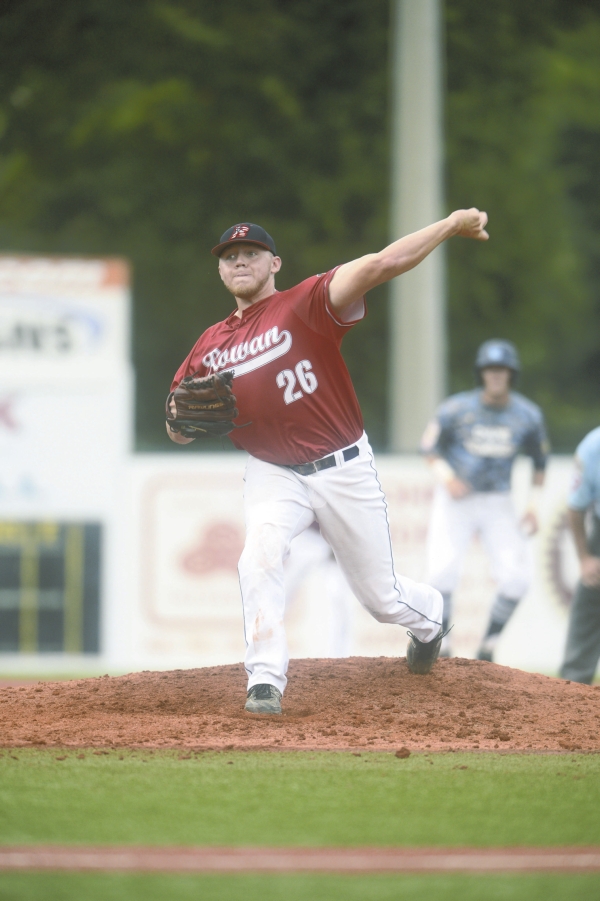 ASHEBORO — There are likely many reasons why Chapin-Newberry’s American Legion baseball team is undefeated, but Thursday night at McCrary Park, there was really just one reason. His name is Justin Hawkins.

In the second round of the Southeast Regional tournament, the South Carolina state champs squeaked past Rowan County, 6-5, to improve to 25-0 on the season. Hawkins, a 6-4, 210-pound shortstop, had a remarkable game, going 4-for-4, including a pair of two-run homers, and drove in five runs, including the game winner in the top of the ninth with a double.

“I have had some big games before but this one is tough to beat,” said Hawkins, a rising sophomore at USC-Sumter. “In that last at bat, I was not looking for a strike at all but when he (Rowan’s Heath Mitchem) gave me the first one, I said, ‘alright, I had better saddle up.'”

The big lefty Mitchem came in to pitch for Rowan in the top of the seventh with his team down one and held the fort until his team tied the score at 5-5 in the bottom of the eighth inning — on a huge Juan Garcia RBI-single.

In the top of the ninth inning, however, Mitchem issued a one-out walk to Peyton Spangler, bringing Hawkins to the plate with the game on the line. He had already bombed the two long homers in the fourth and the sixth innings off starter Bryan Ketchie, then drew an intentional walk in the seventh to set up a force play, as well as avoiding his big bat. Many in the jammed ball park felt another walk was imminent but Mitchem went after him and got ahead, 0-2. Then Hawkins saddled up.

“On the 0-2 pitch, I just left too much of it over the plate,” Mitchem said. “The second I let it go I knew it was one of those you want to get back.”

Rowan Coach Jim Gantt was even more direct about the decisive pitch to an obviously tough hitter. “You just don’t throw him a strike, that’s how you do it,” Gantt says. “Then you move on to the next guy, but we just kept throwing him strikes.”

Hawkins powered a rising line drive to left center field that eluded the glove of a diving Kacey Otto at the base of the wall. Spangler raced all the way home from first and scored the go-ahead run by sliding under the tag of catcher Dustin Ritchie. The play put Chapin-Newberry ahead, 6-5, and sent them into the Southeast Regional winners bracket final Friday night against Alabama or host team Randolph County. Rowan (31-7) plays at 1 p.m. today against the Tennessee state champs in an elimination game.

Hawkins was not the only star for the unbeaten Post 193/24, but he was the brightest. Starting pitcher Danton Hyman, a lefty, battled into the sixth inning versus Ketchie but got a no-decision when Rowan tied the score at 4-4. Hyman responded in the top of the seventh frame with two outs when he hit a line shot over the right field fence, off reliever John Owen, giving his team a 5-4 lead. It was Hyman’s first home run ever in Legion baseball.

That is how you go 25-0 in a big game on a big stage in a sport where undefeated is normally not part of the formula. Chapin-Newberry coach Daniel Gregory acknowledged that going undefeated this late in a long season is not normal but his team is not feeling the pressure. “I tell you what the secret is,” Gregory said. “These kids really just have a lot of fun.”

As for his slugging shortstop, Gregory was very direct about Hawkins. “He is one of the very best that I’ve ever coached at doing what he did tonight,” he said. “He is going to get paid to play this game at some point in his career.”

The Rowan team probably wished he had been drafted this past June but they are prepared to come back today and keep battling.

“There is never a time when we are not in a winning mindset,” Mitchem said. “Everyday is a new day and we will come back out and go at it again Friday (today).”