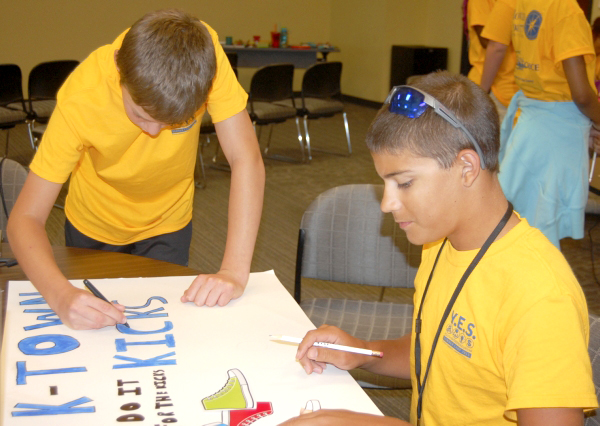 Rowan-Cabarrus’ Small Business Center typically focuses its efforts on adults with small businesses, but this week the focus has been on building the entrepreneurs of tomorrow.

Roughly 20 middle school students are spending their week at the North Carolina Research Campus learning how to start a business.

Sponsored by the Centrolina Workforce Development Board, Rowan-Cabarrus’ Small Business Center is one of only four or five in the state that is offering a summer camp this year.

“The Small Business Center provides business assistance for those who want to start or grow a business,” said Barbara Hall, director of the center. This is achieved, she said, through providing education, counseling and resources.

Hall said that the campers are at a prefect age to begin learning the skills to become an entrepreneur. “By the time they come to see us as adults, it’s a little late,” she said. “They really have to start saving now.

Over the course of the week, campers will work in groups to form a series of businesses to revitalize downtown Kannapolis.

On Monday, they went on a tour of the area, and visited some vacant buildings that are available. Then they divided into groups based on the types of businesses they wanted to create. They learned about Kannapolis’ demographics and looked at maps of the area to give them guidance as they created their business.

Each group selected an empty storefront and filled out the necessary paperwork about their business for a loan. Then, they were granted a mock certificate of occupancy and a mock loan of $25,000.

“It was pretty challenging,” Hall said. “We’re not holding back on what adults would do.”

The campers will wrap up the week on Thursday by presenting their business plans to their parents.

Thaddaeus Lankford and Brennan Allen’s group is working on a business plan for an athletic shoe and clothing store called K-Town Kicks. “In Kannapolis, there’s not really an athletic clothing store,” Lankford said, adding that there used to be a shoe store that went out of business.

The boys decided to set themselves up for success by broadening their market. Their store, they decided, would carry both name brand and off brand shoes, as well as athletic clothing. “It’s sort of like a sports convenience store,” Lankford said.

Gwaltney explained that they saw a lot of potential in one of the vacant buildings they visited. There was a square room, which they decided could hold video games, next to a rectangular room, which they thought would be perfect for a bowling ally. Upstairs, he said, would house pool and air hockey tables.

Davis said his favorite part of the camp was creating business ideas, adding that he wants to be a business owner some day.

Not only will the campers spend the week building their businesses, they will also be able to learn from guest speakers, including bankers and entrepreneurs, and do team building activities.

“We are really pleased with the enthusiasm,” Hall said. “It’s a lot of fun.”

Instructor Wilmenia Gripper said leading this entrepreneurship camp is a “dream come true.” Gripper is a small business owner herself, and she’s always loved working with children. “They’re our future,” she said.

Will the circle be unbroken? Community peace talks seek to heal old wounds

By Rebecca Rider For the Salisbury Post They stand in a line in a field, a collection of nearly fifty... read more