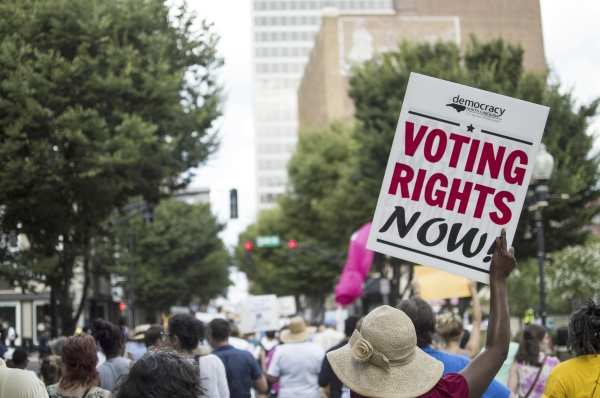 A member of the Salisbury group that traveled to Winston-Salem holds up a sign during a Moral Monday March. The march occurred on the same day as the start of a federal trial over North Carolina's voter ID law.

Today, Aug. 6, marks the 50th anniversary of the federal Voting Rights Act. Passed in 1965, this landmark legislation made the promise of the vote real for millions of Americans who had been excluded from participating in our democracy through violence, trickery and intimidation.

Today, 50 years later, North Carolina is ground zero for a new chapter in the nation’s story of who can and who can’t vote.

As a 15-year-old, I don’t remember hearing about the passage of the Voting Rights Act in my home in Winston-Salem. We lived near other factory workers, down the street from the giant R.J. Reynolds Tobacco factory. We were more focused on survival than on voting.

My deep passion for voting first came as a young woman working at Bell South. It was through becoming a part of the Communications Workers of America union and learning about the history of collective action, labor, and civil rights that I began to understand the tremendous power and potential in my one vote and the vote of all those around me.

I became committed to registering as many people to vote as possible, so that my family and co-workers could use our vote to advance change. Through the collective power of our vote, I believed we could shore up the gains of the civil rights and labor movements, improve the quality of our lives and make a difference in our circumstances. I still believe that.

Looking back, I imagine part of the reason no one talked about voting in my household was exactly because of how dangerous it was for poor, black folks to try to exercise their constitutionally-given right to vote. Even today, my mother cautions me about being too public, too out there, too involved. Voting wasn’t supposed to be for me, for us, for my community.

That’s what the Voting Rights Act changed. Not overnight, and not in every jurisdiction, but really and truly changed. Voting truly is for me, for my community, for all of us. I am a first-class citizen. To threaten my ability to vote now is an attack on me, my community, our history, our soul.

But right now, in the city where I grew up, a federal judge is deciding the legality of H-589, the sweeping “monster law” passed by the N.C. General Assembly to restrict voting. It was the first – and still the worst – law adopted after the U.S. Supreme Court’s 2013 decision to weaken the Voting Rights Act by eliminating the need for North Carolina and other states with histories of voter discrimination to receive federal approval before changing their election laws.

I wasn’t inside the courtroom in Winston-Salem each day the judge heard arguments for and against H-589, but outside I’ve been fighting like crazy against what it could do for voting in our state.

As always, I am registering folks and educating them about the importance of their vote. I’m also connecting the dots between the history of Jim Crow-era voter suppression tactics and the less in-your-face methods of today’s James Crow, Esq. Under the guise of removing fraud, legislative leaders are actually removing procedures that worked effectively to increase access to voting for people of color, young people and many others, like same-day registration during early voting, out-of-precinct voting on Election Day, and pre-registration for 16- and 17-year-olds.

I didn’t know about the Voting Rights Act when it passed 50 years ago, but I’m paying very close attention to what happens in this moment.

It’s time for the courts to stop the anti-voter measures enacted by the General Assembly. It’s time for Congress to update the Voting Rights Act and again allow the U.S. Department of Justice to oversee election law changes in jurisdictions with histories of discrimination.

And it’s time for North Carolinians to stand up and claim the power of the vote like never before.

Linda Sutton is the Central Piedmont organizer for Democracy North Carolina and co-founder of the Winston-Salem Voting Rights Coalition.