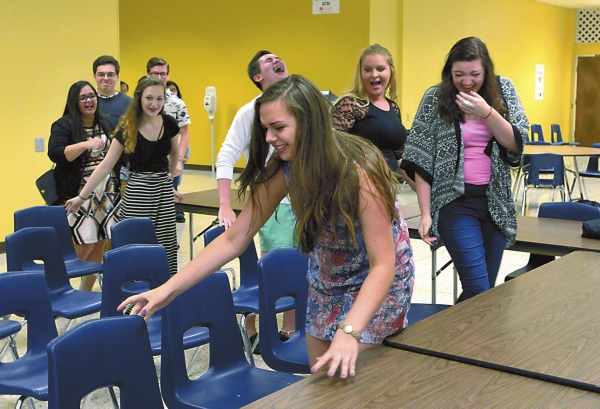 Early College senior Ariel Peoples leads the seniors into the Student Center on the first day of school. Early College was one of eight Rowan-Salisbury schools whose performance score improved in 2014-15, holding on to its B grade.

For the students who attend Rowan County Early College it’s more than just a school, it’s a family.

With the school opening for the 2015-2016 school year on Wednesday, Principal David Miller says the goal remains the same: providing quality education and support for students.

Rowan County Early College (RCEC) started in the Fall of 2009 with barely 50 students. Since then, attendence has grown, with roughly 235 students enrolled for the 2015-2016 year—the highest enrollment the school has ever had, Miller says.

The early college program was designed to create opportunities for kids who would be the first in their family to pursue a college education. It enables students to graduate high school with a diploma and an Associate of Art or Science degree.

RCEC is one of 76 such programs in the state, according to NC New Schools.

Miller says RCEC now has a 100 percent graduation rate, and last year 30 of 46 students chose to continue their education at prestigious institutions such as UNC Chapel Hill and N.C. State.

This year’s seniors are well aware of the shoes they have to fill, and are up to the challenge.

Senior Janssen Keiger has spent his entire high school career at RCEC and loves it. He chose to attend RCEC because of its advanced academics.

“I thought this was the perfect place for me,” he says.

Since then, the school has become so much more — he’s built a family.

Keiger says he loves the way students and teachers connect to each other and form strong relationships. Because of the support system, the demanding schedule is no problem. Teachers make themselves available to help struggling students, he says, and juniors and seniors are more than happy to mentor younger students and guide them through tough classes.

“There’s no reason to drop out because you have the support system,” Keiger says.

He hopes to attend N.C. State next fall and study public relations and advertising. He advises students who are new to or considering RCEC to dig their heels in and push forward.

“It’s probably one of the most challening experiences you’re going to go through,” he said, “but it’s so worth it.”

Miller says that the connections the faculty forms with the student help set RCEC apart. They try to personalize schedules as much as possible, and get to know the students and their families and work with them on what they need.

The school had the opportunity to put their ideology into action, since there are a few hiccups to the start of the new school year. Construction on Rowan-Cabarrus Community College’s north campus means that many of the college courses students were enrolled in were cancelled or relocated to Hood Seminary. Miller and members of the faculty spent much of Wednesday morning working with students to rearrange schedules or figure out transportation.

But the school is flourishing, Miller reported during the back-to-school meeting. Not only is enrollment up, but 92 percent of students who took the ACT scored proficient or higher, and 95 percent of the students receive grades in their college classes.

Miller encouraged students to work hard, to press forward and to keep the end goal in mind.

“I need you to think about where you need these grades to take you,” he said.

Namely, a four year institution. And students entering and leaving RCEC appear to have the ambition to match. Ariel Peoples, a senior, says she had a bit of a rough start her freshman year of high school.

“When you come in as a freshman, they expect you to have that college mindset,” she says.

At the time, Peoples says, she was focused on sports and wanted a normal, carefree high school life. But she realized that she really needed to focus on her academics if she wanted to pursue a degree in psychiatry, as she planned.

“I decided to take the smarter route,” she says.

This year’s freshmen appear as focused and determined as the seniors.

Freshman Savannah Riddle says she’s the first person in her family to pursue a college career, and she aims to attend UNC Chapel Hill and study social work. She knows RCEC will equip her with the knowledge she’ll need at a four year school.

“I’m really proud to be here,” she says.

Jeremy Lopez wants to attend Texas State, and is thinking of studying medicine. He has a cousin who attends RCEC as a sophomore, and knows that the curriculum is rigorous, but he’s not afraid.

“I think this will be one of the best choices I’ve made in life,” he says.

By Mark Wineka mark.wineka@salisburypost.com STATESVILLE — On recent weekends, members of the Statesville Branch of the NAACP have spent hours... read more