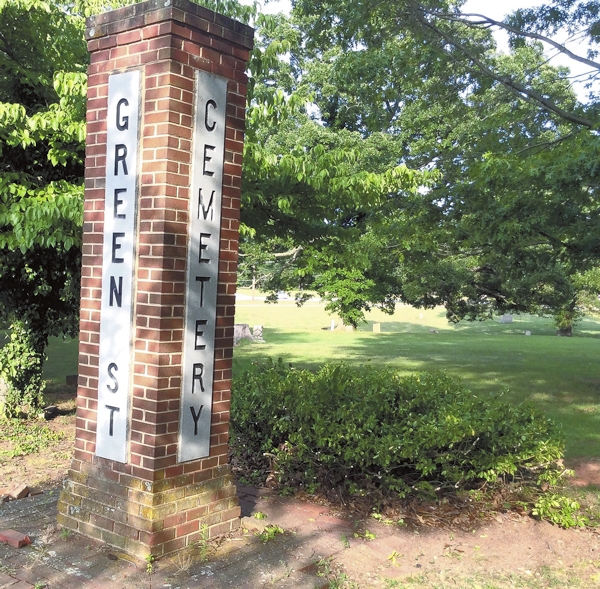 Submitted photo The Statesville Branch of the NAACP has been cleaning gravestones and trying to document the people buried in Green Street Cemetery, an African-American cemetery dating back to the mid 19th century.

STATESVILLE — On recent weekends, members of the Statesville Branch of the NAACP have spent hours using Dawn dishwashing liquid, all-purpose flour and lots of water to give gentle cleanings to the surviving headstones of Green Street Cemetery.

The similarities between Green Street Cemetery and Dixonville Cemetery in Salisbury are numerous.

Both were dedicated to the burials of African-Americans. Both date back into the mid 19th century. Both are now maintained by their respective cities, and burials have not taken place at either cemetery for many decades.

One difference is the number of surviving markers in the cemeteries. While Dixonville has roughly 25, Green Street has 110 to 120, according to Anthony Turman, president of the Statesville Branch of the NAACP.

Turman says burials stopped in Green Street Cemetery in 1944 or 1945.

“These things are just fascinating,” Turman said of what the African-American community has been learning from the efforts to clean the headstones and markers. “… Kids are fascinated to put their hands on that kind of history.”

A final cleaning day at Green Street Cemetery is scheduled from 9 a.m. to noon this Saturday. “The city has been absolutely great in helping us,” Turman said.

The weekend work crews this summer have had people ranging in age from 6 to 70, Turman said. The NAACP’s planning for the project began in April, when a special committee was appointed.

Turman said nobody knows exactly when Green Street Cemetery was established It covers 3.39 acres and is “pretty much undocumented,” he said.

At one time, the railroad apparently owned the land, and it was sold later to the Negro Funeral Home Directors Association. The city of Statesville took over its maintenance in 1961, and it’s considered city property now.

All of the grave sites with markers have been photographed, and a list has been made with the names and dates, but gathering more information has been difficult. Death certificates have not always been available or easy to track down. NAACP volunteers have been going to the Iredell County Register of Deeds and Clerk of Court offices in their searches.

Turman said he will ask the NAACP’s executive committee to consider buying a newspaper advertisement in which the cemetery names will be published, in hopes relatives will recognize those names and give more information on the people buried in Green Street Cemetery.

The NAACP has been placing American flags next to the cemetery markers of military veterans they identify. Turman noted several markers belong to veterans of the Spanish-American War. He said another man was an early Coast Guard veteran.

Some of the people buried in Green Street Cemetery were the sons and daughters of slaves, who went on to become important community leaders. Turman said the marker of D.S. Alexander, who died in 1934, notes that he was a teacher and elder in Rowan and Iredell county schools for 51 years.

Many of the markers, such as Alexander’s, record the date of death but do not include a birthdate, making it even tougher in finding out more information. Another hindrance has been in locating all the flush-to-the-ground markers. Some headstones also have been moved, broken, vandalized or nicked over the years by lawn mowers.

Turman said the next thing the NAACP would like to investigate is putting up some kind of containers or vases that can hold artificial flowers next to the graves.

Since working on Green Street, the NAACP has heard of three other African-American cemeteries, some of which are built over or hidden by brush. “We’re going to look into that,” Turman said.

In addition, Turman would like his branch to collaborate with the Salisbury branch of the NAACP on things related to Dixonville Cemetery, and he hopes Salisbury could help with continuing efforts connected with the Green Street Cemetery.