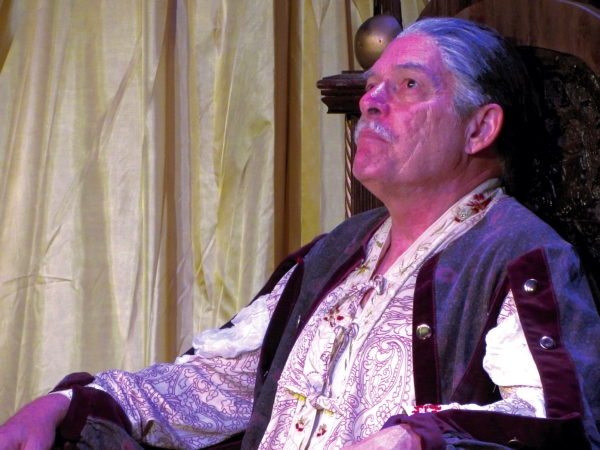 In an upcoming production local actor, author, and Catawba College professor Kurt Corriher will portray the legendary John Barrymore in a play titled simply “Barrymore.” According to the show’s director, Craig Kolkebeck, Catawba’s scene shop manager and adjunct theatre instructor, the production gives Kolkebeck and Corriher a chance to collaborate as colleagues in a theatre project.

The production will run in Cornelius Aug. 6-8 and 13-15 at the Warehouse Performing Arts Center, before coming to Salisbury for three performances at the Florence Busby Corriher Theater on the campus of Catawba College.

The Salisbury offerings of “Barrymore” begin at 7:30 p.m. Aug. 20 through 22 at the Florence Busby Corriher Theater. Profits from the Salisbury run of the show will go to benefit the Blue Masque at Catawba College.

Corriher follows in the footsteps of British actor Christopher Plummer who won a Tony for his performance as Barrymore in the highly acclaimed Broadway production of the same name. Catawba theatre student Caleb Garner of Robbins will share the stage with Corriher, playing the role of The Prompter.

Kolkebeck, who most recently directed “A Few Good Men” at the Lee Street Theater, directs “Barrymore” by William Luce. Luce is best known as the author of “The Belle of Amherst,” a similarly biographical play about poet Emily Dickinson.

Kolkebeck shares: “It was probably a year ago when Kurt and I were talking about finding a project that we could work on together… Kurt mentioned a play that he had always wanted to do, called ‘Barrymore.’ It wasn’t the play itself that caught my interest so much as Kurt’s statement: ‘I’d like to do it before I no longer can.’

“That was like what Barrymore says in a line from the play: ‘I need to be taken seriously, once more before the man in the bright nightgown comes for me.’ ”

Tickets for the Salisbury performances (Aug. 20-22 at 7:30 p.m.) are available at the door of the Florence Busby Corriher Theater on the Catawba College campus. Reservations for the Cornelius run of the show can be made at 704-619-0429.