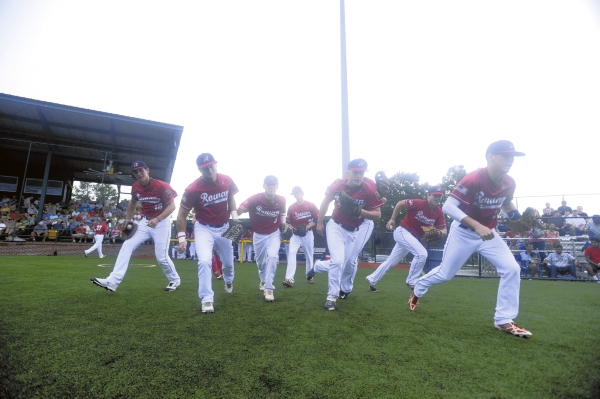 ASHEBORO — A downcast Heath Mitchem was the losing pitcher and wanted to shoulder the responsibility for Thursday’s 6-5 loss to South Carolina champion Chapin-Newberry.

But he was wrong. It was a dozen things that added up to beat Rowan County.

“If we get one more key hit, we win, and we had the right guys at the plate to get that key hit,” Rowan County coach Jim Gantt said. “We probably win it if we just get one wild pitch. Their pitchers bounced a bunch of balls up there, but their catcher (Duncan Crotwell) didn’t let anything get by him. It just wasn’t our night.”
Rowan plays today at 1 p.m. against Tennessee in a win-or-go-home game in the double-elimination American Legion Southeast Regional. Chapin-Newberry will play in tonight’s 7 p.m. game.
Undefeated Chapin-Newberry’s stars put on a show.
Justin Hawkins, a powerful shortstop, helped frustrate Rowan County’s offense with his range and arm and mashed the ball at the plate. Rowan never got him out and he belted a pair of two-run homers as well as the game-deciding double in the ninth inning. He drove in five of his team’s six runs.
As talented as Hawkins is, Chapin-Newberry coach Daniel Gregory calls hearing-impaired pitcher/outfielder Danton Hyman his team’s “sparkplug and best all-round player.”
Hyman pitched into the sixth, blasted the first American Legion homer of his life and made an ungodly catch after he moved to center field that robbed Harrison Baucom of a three-run double or triple.
“I thought for sure that ball was in the gap or off the wall,” Baucom said. “I guess I should’ve hit it harder.”
It was all Chapin-Newberry (25-0) for a while. With Hyman on base in the fourth inning, Hawkins lashed a screamer over the fence in right field after Rowan starter Bryan Ketchie, who lasted six innings, got behind in the count. In the top of the sixth, Hawkins followed Peyton Spangler’s single with a massive drive over the center-field scoreboard for a 4-0 lead.
Silent for five innings, Rowan County (31-7) made noise in the sixth, scoring four runs with hit-and-run singles by Mitchem and Dustin Ritchie, five walks and Baucom’s sacrifice fly.
That sac fly came on the sensational catch on the rain-soaked warning track by Hyman. It tied the game at 4-all, but when that ball soared off Baucom’s bat, it appeared Rowan would take the lead.
“That South Carolina team battled us all day, and it was emotional,” Baucom said. “We had a bad start, but we showed a lot of heart, a lot of passion to come back from 4-0.”
Rowan reliever John Owen got two quick outs in the seventh, but then Hyman, a lefty, cracked a solo homer to put the South Carolina squad up, 5-4. He punched the air with a fist as he watched the ball clear the right-field wall at Asheboro’s scenic McCrary Park.
“That look on his face when he rounded third base made the season for me,” Gregory said. “Even if we’d lost today, I could’ve lived with it after seeing him that kid hit a home run.”
Mitchem, Rowan’s DH, moved to the mound in the seventh frame and got the last out of the inning with the bases full. Mitchem allowed a leadoff double in the eighth but worked out of another jam.
Rowan rallied for a second time in the eighth inning when Juan Garcia’s two-out single drove in Jeremy Simpson for a 5-5 tie.
Entering the ninth inning, Hawkins was 3-for-3, plus an intentional walk, and he was due up third in the inning.
Mitchem got Hyman out, but a walk to Spangler complicated things and led to a mound meeting. Gantt was reluctant to replace Mitchem in part because Mitchem, who had two hits, was scheduled to lead off the bottom of the ninth.
Hawkins is scary, but Mitchem doesn’t scare easily. Gantt reminded him to be careful, not to give Hawkins anything too good to hit.
“I really wanted to try to help with my bat in the ninth and I told Coach Gantt I could get that guy out,” Mitchem said. “It’s not like he’s Albert Pujols.”
Mitchem threw two perfectly located pitches and was ahead 0-and-2.
“I wanted to throw the next pitch way outside, but I just missed the spot,” Mitchem said.
The pitch was almost down the middle, and Hawkins launched it wickedly toward the wall in left-center. Rowan center fielder Kacey Otto made an all-out effort but failed on an attempt at a diving catch. Spangler, running from first base, was determined to score the go-ahead run, and the relay throw to Simpson, Rowan’s shortstop, was close to perfect. Had Simpson been able to make a pinpoint relay to the plate, Spangler may have been out, but Ritchie had to jump for the throw, and Spangler slid in under him.
Mitchem stranded Hawkins at third base, and Rowan had one more shot.
But Mitchem, Ritchie, who had three hits, and Hunter Shepherd went down quietly against closer Ryan Stoudemire.
“That last pitcher had really good velocity, and after the off-speed stuff we’d been seeing, it must have looked like it was 100 mph,” Gantt said.
Tristan Smaltz, who relieved in the sixth inning, was the winning pitcher.
Rowan players vowed to come back strong today against a Tennessee squad that put 18 runs on the board against Georgia on Thursday.
“We started slow today,” Mitchem said. “This was an eye-opener that we can’t start slow again.”
The pressure would seem to increase with each victory by Chapin-Newberry, but Gregory insists that’s not the case.
“We don’t talk about pressure or staying undefeated, we talk about keeping it fun,” Gregory said. “At no time today did we stop having fun.”