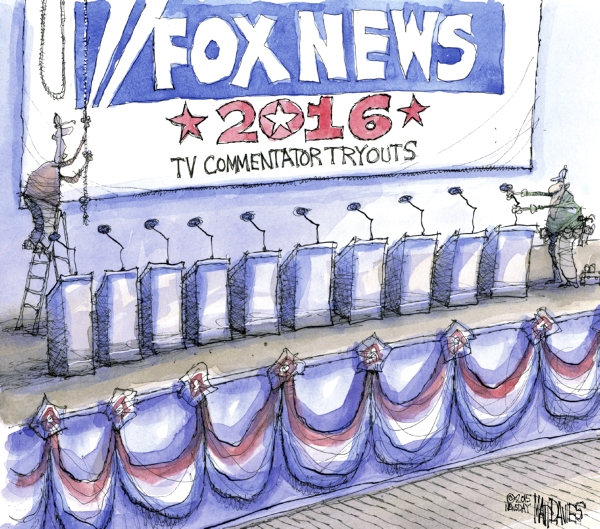 From an editorial in The Dallas Morning News about the presidential debate airing on Fox News at 9 tonight:

Q. Republicans mostly agree that immigration reform starts with securing the border. OK, but then what? Donald Trump wants to deport 11 million-plus undocumented immigrants and let the “good ones” return. Is that feasible? If not, what would work better?

Q. Texas lawmakers ignored calls this year to repeal in-state college tuition for undocumented immigrants who got their high school diplomas and kept out of trouble. Please critique this one effort — signed into law by former Gov. Rick Perry — to improve the Texas workforce.

Q. Drought just recently released its grip on Texas after some tense years, but California is still suffering. Do you think man-made climate change is at work, and what should Washington do about it?

Q. Communities are coming to grips with the death of black citizens who come in contact with police. Please assess the deep mistrust that black Americans have of authority, and tell us how you would address it as president.

Q. State and federal prison populations have exploded during a four-decade “War on Drugs,” and the U.S. incarceration rate is the highest among developed nations. Please assess why the nation has so many people behind bars and tell us what you’d do about it.

Q. The growing gap between the haves and have-nots is a hot political topic. Should conservatives care about income disparity — Texas has one of the nation’s highest rates, by the way — and how would you address it?

Q. Two Muslim gunmen were shot dead in Garland, Texas, illustrating the danger of radicalized Islam. How would your policies toward terrorism and the Islamic State differ from the Obama administration’s?