Will the circle be unbroken? Community peace talks seek to heal old wounds 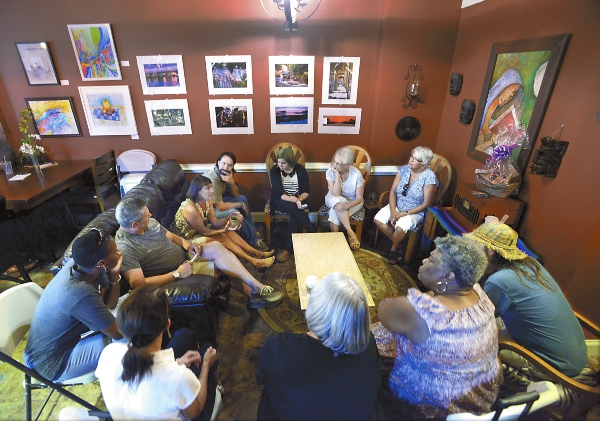 Rev Robin Tanner, in the back center, leads one of the 4 circle groups at the Peace Circle group meeting at Mean Muggs. photo by Wayne Hinshaw, for the Salisbury Post

They stand in a line in a field, a collection of nearly fifty people from Salisbury, Spencer, Rockwell and Charlotte. Teaching Pastor of Mission House Church Anthony Smith and Piedmont Universalist Unitarian Church Minister Robin Tanner call out questions and ask indivudals to take a step forward, a step back, or stand still depending on their answer. Did you graduate from college? Step forward. Did you grow up in an urban setting? Step back. Did you have access to health care growing up? Step forward. Have you been a victim of violence due to ethnicity, gender, or religion? Step back. The goal is to create a visual example of the privileges and disadvantages we possess that most people aren’t aware of — which is one of the many topics tackled by a group of people who attend the Peace Circle.

The Peace Circle was started by Tonya Miller Cross, Mean Mug owner Evelyn Medina, Smith and Tanner a little more than a month ago. It began when Medina noticed acquaintances in different parts of town had similar complaints, worries and hopes for Salisbury-Rowan. But they were isolated. Medina wondered if there was a way to bring them together, and mentioned the idea to Miller Cross, and Peace Circle was born. Miller Cross says she’s wanted to start something like Peace Circle for a while and Smith and Tanner were brought in to help organize and to facilitate discussions.

Once a month, Peace Circle meets at Mean Mug coffee shop on Fulton Street to discuss racism, poverty and social disparities in Salisbury-Rowan and ways the community might begin a mission of reconciliation and healing. Smith says the talks are meant to allow people to air grievances and talk about topics that are normally considered uncomfortable and taboo, like racism. After the shootings in Charleston, the conflict surrounding the Confederate flag, and protests about Salisbury’s own monument, Smith says the timing was right.

“We felt that we needed a more intentional conversation,” he said.

While participants are encouraged to share their own experiences, Smith says, it goes beyond personal perception. The goal is to open people’s eyes to systematic problems in their own community.

They try to keep the conversation organic. Participants split off into groups, cups of coffee in hand, and discuss a particular topic. From there, the conversation flows where it will, sometimes with gentle prodding from moderators. People share their life stories, how they’ve been impacted by racism, by prejudice, or how they had an upbringing relatively free from worry.

“We just allow people to speak from their hearts,” Miller Cross said.

It’s only the Circle’s second meeting, but the conversation is lively. Participants take turns sharing, passing an object around to signify that someone has the floor—a pencil, a coaster, a coffee mug. While each person speaks, other group members practice what Tanner calls “deep listening” — an effort to acknowledge and respect what another person is saying and to recognize that their experiences are different from your own and just as valid. It can be emotionally raw, and the moderators strive to create a safe space where people feel like they can share safely, without fear of judgement or backlash.

But this deep listening has another goal, Tanner says. When people are open and honest with each other in this way, it builds relationships. It creates a sense of commitment and accountability to your friends, your neighbors, your community.

“I think that’s how a community is transformed,” Tanner said.

This month, Peace Circle talked about how privilege, or lack there of, is manifested in Salisbury-Rowan. But the conversation grew, slowly, and each group ended up discussing different topics: the history of racism in the county and the ways they’ve seen it linger, how policy contributes to social inequities in the Salisbury-Rowan, about the poverty in the county or of their hopes for the future and for their children.

How do you go about fixing something so huge, they asked. And then they started brainstorming how to solve it. How could one person make a difference, they wondered. How could an individual begin to ease the tension, the conflict and the pain? What would a peacemaking effort in Salisbury-Rowan look like, and how could it be accomplished?

The answer was different for each person. Some agreed that being open and friendly was a start, others that broadening the conversation and bringing more people into it was a part of the solution.

For Teresa Rowell, part of the answer is in speaking up.

Rowell says she thinks it’s important to not shy away from difficult and uncomfortable conversations — that they need to be had. To Rowell, her faith as a Universalist Unitarian calls her to have these conversations and prompted her to attend the Peace Circle. In a way, she says, the recent conflicts are a good thing.

It’s not always an enjoyable conversation, but it’s an important one, and she hopes that discussions like the ones happening at Peace Circle will move the community towards a better future.

“I feel like this is an exciting time for Salisbury,” Rowell said.

To Clarissa Best, change starts with her own attitude.

“I want to do what I can to make the world a better place,” she said.

Best is a mother of two, and wants her children to leave the world a little brighter than they found it. But she can’t ask them to do something she hasn’t done herself. It’s her first time attending Peace Circle, but Best says that last night, she learned how important it can be to not judge by appearances.

Medina says that the Circle embodies the dream she had when she opened Mean Mug — a diverse place, a place where the community could gather and come together.

“To stand here and have that dream come true was priceless,” she said.

Tanner says she hopes to see people break out of old categories and labels in future Circles. So many people in Rowan County have an integrity, she says, a desire to know each other well and do well by each other.  She wants to see that reality realized, and for the hopeful and passionate people who attend Peace Circle to help Salisbury-Rowan discover its hidden spark.

Tanner encourages people from all walks of life to come to Peace Circle — all viewpoints are valuable and important, and confronting cynicism and hearing opposing ideas is often how people grow. And healing a community is going to take all of us, she says.

Peace Circle is held at 6:30 p.m. on the first Tuesday of every month at Mean Mug on South Fulton Street.  The next Circle is scheduled for Sept. 1.