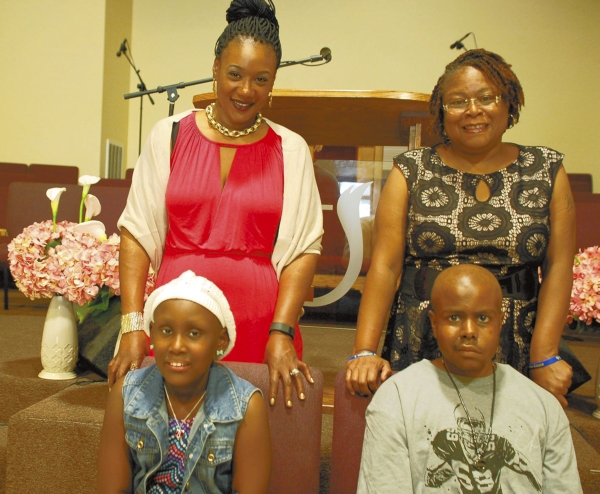 Mark Wineka/Salisbury Post A gospel benefit concert will be held Saturday evening at Mount Zion Baptist Church for Jalisa Gladden, bottom left, and Robert Stephen Gilmore, bottom right, who are both battling cancer. Their mothers are behind them: Jamila Gladden, left, and Wendy Gilmore-Baskins, right.

SALISBURY — A gospel benefit concert — “Miracles, Signs and Wonders” — will be held Saturday evening for 18-year-old Robert Stephen Gilmore and 9-year-old Jalisa “Muffin” Gladden, both of whom are fighting cancer.

The concert will start at 6 p.m. at Mount Zion Baptist Church, 1920 Shirley Ave. It is free and open to the public. A love offering for Gilmore, Gladden and their families will be received.

Teresa A. Moore-Mitchell is serving as the evening’s host, and she organized the concert. Moore-Mitchell grew up with Gilmore’s mother, Wendy Gilmore-Baskins, in the Jersey City neighborhood of Salisbury.

“I consider her family my family,” Moore-Mitchell said.

In knowing about the challenges facing Robert Stephen Gilmore, Moore-Mitchell told his mother she would love to do a concert to celebrate him, bring awareness to childhood cancer and help their family with the financial strain it was under.

“She had the heart to make sure someone else’s child was included,” Moore-Mitchell said.

Gilmore-Baskins, a mentor and advocate for families dealing with pediatric cancer, plans to have educational materials available at the concert.

“My goal is for families to have support or know how they can reach out for support,” she said.

All of the artists are donating their talents for the evening.

The Rowan-Salisbury Board of Education created its first ever “Courage Award” in Gilmore’s honor earlier this summer and presented it to him at a school board meeting.

The son of Gilmore-Baskins and Travis Hairston, Gilmore will be a senior at Salisbury High School this fall. He has dealt with cancer three times. He overcame a brain tumor as a 3-year-old. When he was 15, he was diagnosed with colon cancer, probably a result of the radiation he received as a toddler. Though it seemed to be in remission for awhile, the colon cancer returned in May and the growth of the cancer was aggressive through his abdominal region until a recent round of chemotherapy seemed to stall it.

Gilmore-Baskins said the family is trying to give Gilmore the best quality of life it can.

“It’s a different animal than we have dealt with before,” Gilmore-Baskins said. “All we can rely on is our faith. We’ve just left it up to God to help us through this process.”

This spring, Salisbury High students named Gilmore their prom king. He’s a big sports fan and is hoping he might be able to help out the Salisbury High Hornets football team as a manager.

Jalisa Gladden, who lives in Charlotte, is a rising fourth-grader at Sugar Creek Charter School who is being home-schooled for now because of her illness, diagnosed in April as Wilm’s tumor. The cancer attacked her right kidney, which was removed. Jalisa then went through eight radiation treatments and is now immersed in a regimen of chemotherapy.

Jamila Gladden said she took her daughter to the doctor one day because of reoccurring stomachaches, and within 12 hours Jalisa went from having a stomachache to being diagnosed with a Stage 4 cancer.

For people who won’t be attending the concert but would still like to make a donation, both families have set up special accounts at the State Employees Credit Union.

Salisbury’s Baker back in saddle for his fourth Carolina…