National Night Out harkens to days of old for some 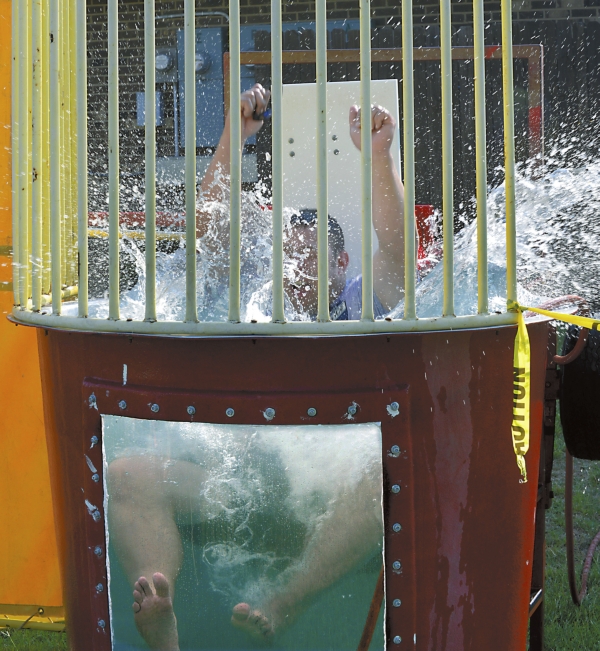 At the Clancy Hills Apartments National Night Out, Salisbury police officer Matt Benjamin takes a dunking in the dunking booth with the children throwing the softballs to dunk him. photo by Wayne Hinshaw, for the Salisbury Post

As a child, Ronnie Bruce used to sell hot dogs along with his mother from the back of his father’s truck in the Park Avenue neighborhood. It was a time when the majority of the community worked in the mill and lived in one of the “mill houses.”

Bruce took a moment to reflect on the “old days” as he shared a hot dog with other neighbors from the Park Avenue community during the National Night Out event.

The event, which is held the first Tuesday in August, is an opportunity for the community to get to know one another and their local police. In communities throughout Salisbury and in East Spencer, the heat didn’t deter many from attending their own block parties, carnivals, porch parties and gatherings Tuesday.

It was the first time Bruce said he’s attended the National Night Out event. This year’s outing was sponsored by the Park Avenue Neighborhood Association and featured local musicians Matthew Church, Jabe Fisher and David Myers.

Bruce said events like the National Night Out are needed to share with this generation the values of the previous generations and show them “how important it is to connect with families.”

He said when he was a child, neighbors knew each other, families gathered for evenings out on the porch or in the yard and children could play outdoors without fear.

“It’s strange. You can live next door to someone and don’t even know who they are,” he said.

He called the gathering of his community a start and encouraged the organizers to do more similar events.

Johnny Brooker said loved the event. He said the Park Avenue Neighborhood Association “hit it out of the park.”

“I’m glad the community is coming together. It’s good for everybody. It’s a good event. The kids have a good time and it brings the community together,” Brooker said.

His brother, Thomas, echoed his sentiments saying “it’s excellent that people can come together.”

“We’ve got good music. Everyone is sitting around with fat bellies and are happy,” Thomas Brooker said.

He also said events like it need to be done more often.

As the temperature reached 93 degrees, arguably Salisbury Police officer Matt Benjamin and Lt. Greg Beam had the best seats at the Clancy Hills National Night Out event where organizers turned a parking lot into an old fashioned southern carnival, complete with a dunk tank. The two officers, along with Clancy Hills staff, volunteered to let children take turns pitching balls to dunk them.

Each child and adult received tags that were then given a hole punch for each game they played and at the end of the night they could redeem their punches for prizes at the “general store.” Many of the store items were provided by the Westminster Co., the property owners of Clancy Hills and Milford Hills United Methodist Church, who also had volunteers on hand.

Laura Kennedy brought her 7-year-old daughter, Tae, to the event for the first time.

“This is a good idea. It gives the community a chance to come together and meet one another,” Kennedy said.

Corinthian Fortune said she also was attending the Clancy Hills event for the first time. She admitted she didn’t know what to expect, but to her surprise the event was a sizable one.

“It’s a good thing. It gives the kids something to do for the summer,” she said.

Tabitha Williams, 13, and her family have attended the last several National Night Out events at Clancy Hills. She helped her mother, Jennifer Earnhardt, with her three other siblings.

“It’s really nice. It’s a time where we can come together and have fun,” Tabitha said of the event.

As to this year’s carnival theme, Tabitha said, she likes the idea of playing games in order for a chance to win a prize.