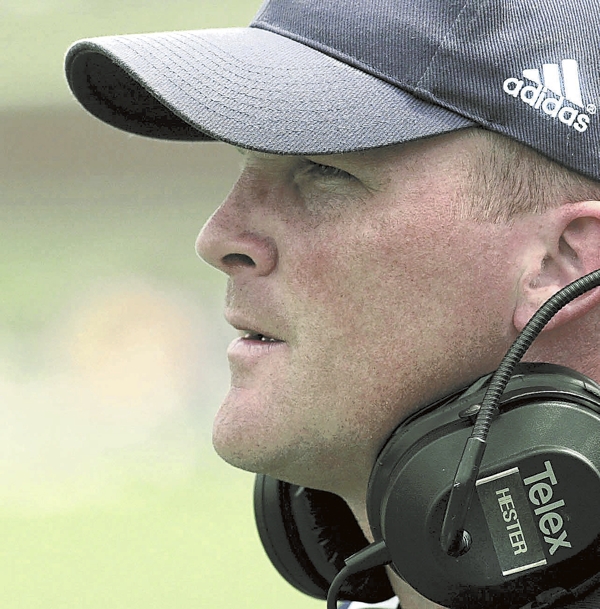 SALISBURY — Winter was turning to spring in 2014, and Chip Hester, Catawba’s head football coach from 2002-2011 and a man who had led the Indians to the NCAA Division II playoffs three times, was content with his job as Catawba’s director of athletic development.
Reasonably content, anyway.
But there was a part of Hester that was still in love with football. He missed the camaraderie of the locker room, formulating game plans with fellow coaches and the fierce competition on fall Saturdays.
“It’s not that I disliked what I was doing at Catawba and that job could be perfect for me in the future, but I thought it was early for me to be done with coaching,” Hester, 45, said. “I believed I still had some coaching left in me. I still had a passion to get back on the sideline.”
There was a lot of prayer. There were a lot of family discussions about what to do next.
“I remember telling my wife (Trish) that I wanted to get back into football, but if nothing happened in a few weeks, I was going to move on,” Hester said. “I told her I had to find something no more than an hour from Salisbury because we love the community, we love our neighborhood and our daughters love going to school here.”
The call from North Carolina A&T head coach Rod Broadway came out of the blue two weeks after that “give-it-a-few-more-weeks” conversation. Broadway offered Hester a football job in Greensboro — exactly an hour away. Broadway needed a receivers coach on short notice. A mutual friend had recommended Hester, a receiver in his playing days at Raleigh’s Millbrook High and Guilford College, as well as Catawba’s receivers coach on his journey to being the head coach.
“It was very spur of the moment — it’s not like I went through an interview process — but I did know that Coach Broadway had a great track record,” Hester said. “It moved quickly. Trish was all for it. My daughter, Morgan, was fired up. She wanted me to get back into coaching. She knew I missed it.”
Hester accepted the job offer.
The hour drive each way isn’t ideal, but the morning commute gives him a chance to drink coffee and prepare himself for a new day’s challenges. The trip home is an opportunity not only to unwind but to make recruiting calls.
“A lot of people commute to work,” Hester said. “Sure, there have been a few nights spent on a cot in the coaches office after late games, but there have been many more pluses than minuses.”
The coaching aspect at N.C. A&T — a school that competes in that FCS tier between Division II and the big-time Division I programs — has been everything Hester hoped it would be.
“Helping young men become better people as well as better players is what it’s about,” Hester said. “When you coach, your life has purpose, and we’ve got some great young men here to work with.”
Hester’s family enjoys going to the Aggies’ games, and the low-key Hester has fit smoothly on a stable staff.
“I learn something every day and we laugh every day,” Hester said. “That’s about all you can ask.”
N.C. A&T went 9-3 in Hester’s first season on the staff. The Aggies traveled to Orlando, Fla., where they rolled Alabama A&M in a nationally televised Sunday afternoon game. There also was a 13-0 loss to South Carolina State in Atlanta’s Georgia Dome. S.C. State nose guard Javon Hargrave, the former North Rowan star, had a lot to do with that shutout of the Aggies.
“I watched film of Javon against Clemson and he was throwing Clemson offensive linemen around,” Hester said. “I call him Mr. Hargrave. He’s a Sunday (NFL) player — no question.”
Hester will enjoy an increased role and more responsibility in the 2015 season. While he’ll still coach the receivers, he’s also been elevated to offensive coordinator.
“We’ve got a lot of talent,” Hester said. “I’m excited about the opportunity.”
N.C. A&T opens on Sept. 5 at home against Shaw. The next four games are on the road, including a trip to Chapel Hill to take on the Tar Heels (and Salisbury’s Romar Morris) on Sept. 12.
The biggest game for the Aggies is always rival North Carolina Central. That game will be played in Greensboro on Nov. 21 and will conclude the regular season.
“That game is always an event,” Hester said.
Hester said he talks a couple of times a month to Curtis Walker, who replaced him as Catawba’s head coach. Hester believes the Indians, picked fourth in the South Atlantic Conference, are headed for a strong season. He wishes them well.
The toughest part of Hester’s football duties will be missing most of Morgan Hester’s volleyball games at Carson High School. She’s one of the county’s best players and will be a senior this year.
Hester’s younger daughter, Tori, is an eighth-grade student athlete.
“Working in Greensboro and missing the girls’ games is a drawback, but there are drawbacks with any job,” Hester said. “I’m very thankful to be coaching football. My family tells me I’m still chasing my dream — and I guess I am.”