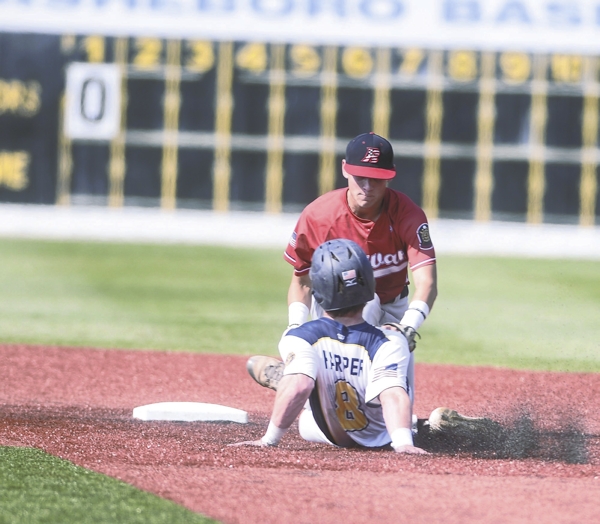 ASHEBORO — Rowan County’s Harrison Baucom fell on his backside while waiting for a fly ball to descend, but he calmly made the catch while sitting in front of the right-field wall.

“That play went just as I planned,” Baucom said, with a laugh.
Rowan County Post 342 tripped and slipped more than usual, but it managed to beat Wheeling Post 1, the West Virginia champs, 8-4, on opening day here in the American Legion Baseball Southeast Regional.
It was 4-all in the eighth inning, but that’s when leadoff man Baucom and Michael Caldwell came through with clutch hits.
“You could tell we hadn’t played in a week,” Rowan coach Jim Gantt said with a sigh. “We weren’t sharp. We just kept plugging until Baucom finally got a big hit.”
The victory kept North Carolina champion Rowan County (31-6) in the winner’s bracket of the double-elimination event. Rowan has won 29 of its last 31 contests and is on a 14-1 roll in postseason play. Rowan takes on South Carolina (24-0), a 4-3 winner over Florida, at 4:30 p.m. today at McCrary Park.
Heroes in Wednesday’s win were reliever Sawyer Strickland, who took over on the mound in the fifth inning; Hunter Shepherd, who produced the two-run double that got Rowan started, and, of course, Baucom.
Rowan, which started Omar Bautista on the mound, trailed, 1-0, after an inning, but in the top of the second, Shepherd sent an opposite-field double screaming toward the left-field wall to chase home Juan Garcia and Riley Myers.
“I’d been struggling a little bit, but my timing felt better today,” Shepherd said. “The double came with two strikes on me. With the bases loaded, I was just trying to stay out of the middle of the field where they could turn a double play. I hit the ball to left, and it worked out.”
Kacey Otto’s grounder to shortstop scored Dustin Ritchie with the third run of the inning.
Garcia singled home Caldwell in the fifth frame for the fourth Rowan run.
West Virginia knocked out Bautista in the fifth inning and cut Rowan’s lead to 4-3. Strickland relieved Bautista with the bases loaded and one out.
“It was a tough situation, but I’m getting used to it and I’m gaining more experience,” Strickland said. “I made the pitch I wanted to make. It was a low fastball.”
The result was a hard ground ball off the bat of Brian Campbell that hummed directly toward Rowan shortstop Jeremy Simpson. Simpson started a smooth double play, and Rowan kept the 4-3 lead.
“Strickland came into a situation where his heart rate was up and his adrenaline was pumping,” Gantt said. “It was great that he got two outs on one pitch and got us out of a jam, but it was even better that he was able to put success behind him and go back to work.”
Strickland enjoyed a 1-2-3 sixth inning. He allowed a run on two hits in the seventh as West Virginia made it 4-4.
“They were scrappy and they could hit,” Baucom said.
West Virginia (28-9) had momentum going to the eighth inning but let it slip away. Heath Mitchem started the inning with a walk and Ritchie bunted Mitchem to second, but West Virginia starter Jameson Murray struck out Shepherd after he hit several balls hard, but foul.

Kacey Otto’s walk extended the inning, and when Simpson was struck in the helmet by a pitch, Baucom got to bat with the bases loaded. Facing reliever Colton Coss, he stroked a 2-1 pitch into left field with an easy swing for the two-run single that broke the deadlock.
“That pitch was up and in, but I was able to execute,” Baucom said. “I needed to get those runs in.”

Caldwell followed with another two-run single.
Strickland did the rest. A number of relievers got loose in the pen, but Rowan didn’t have to use them. Strickland had a 1-2-3 eighth, with Baucom supplying the first out with his seated catch.
When Strickland walked the leadoff man in the ninth inning, Rowan’s bullpen stirred to life and Gantt looked anxious, but he stuck with Strickland.
“I never really know how long I’ll pitch,” Strickland said. “I was just playing it by ear, and I was going to keep pitching until they came and got me.”
They never had to go get Strickland, and Rowan’s pitching staff stayed in good shape for the tournament.
“Strickland wasn’t broke — there wasn’t anything that needed fixing,” Gantt said.
Bryan Ketchie, a southpaw with a 6-0 record, will pitch today against South Carolina, a team with numerous left-handed swingers.