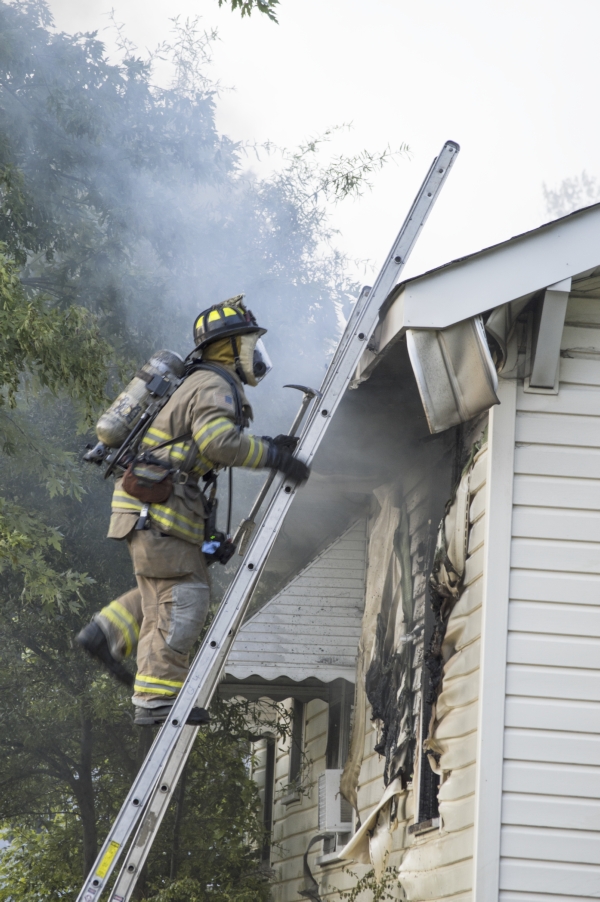 Josh Bergeron / Salisbury Post - A firefighter climbs up a ladder at the scene of a fire on Grove Street in Salisbury. No one was hurt in the blaze.

Salisbury Police have confirmed a Grove Street fire that displaced Sidney Nicol and his two younger brothers was arson. No arrest has been made, but the investigation continues, said Police Capt. Shelia Lingle.

The fire occurred Monday just before 8 p.m. at 522 Grove St. where Nicol has been a renter for the last two years. No one was hurt during the fire, but Nicol’s brother was temporarily trapped in the bathroom. He told a Post reporter his brother was locked in the bathroom, but managed to get himself out.

Nicol, 25, who works at the Food Lion warehouse, had just left for work around 7 p.m. and received a call from his brother informing him their house was on fire. Nicol said this morning he told his supervisor his house was on fire and that he had to leave. He arrived in time to see firefighters continuing to douse the property with water. Fire crews also had to cut a hole in the roof to vent the home.

Fire officials said Monday the fire was mostly on the front of the home and extended into the attic. Firefighters responded to the scene within minutes.

Nicol told the Post a woman set fire to the house. Police did not confirm details as to how the fire was set. He said he’s gone back into the house to determine if anything was able to salvage anything.

“Everything is gone,” he said.

The items that were not destroyed by fire were water damaged, Nicol said, including his brothers’ immigration papers. The family is from Liberia.

With a series of policy and financial decisions, the Rowan County Board of Commissioners on Monday began to shape the... read more