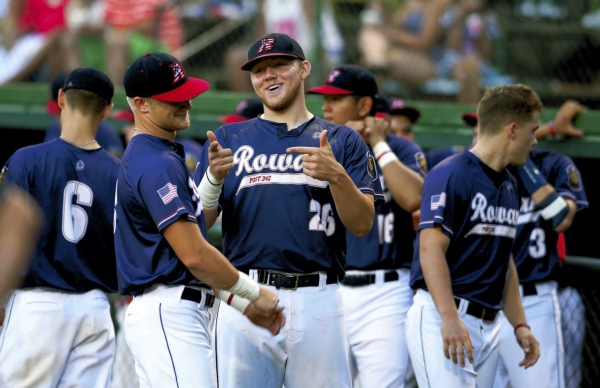 SALISBURY — Rowan County’s easy-going Heath Mitchem is a perfect target for the good-natured barbs of his teammates, and they constantly remind him that he’s the world’s most fortunate designated hitter.

“I crush a line drive in the gap and someone runs it down,” Rowan second baseman Michael Caldwell said with a laugh. “Heath hits a little ground ball and it goes through. Always goes through.”
Mitchem listens and grins. If he’s little luckier than some, he’ll gladly take it — because he’s helping his team win.
“I guess maybe I am lucky,” Mitchem said. “But if part of hitting is being lucky than I hope I can keep on being lucky a little longer. I just do what I can. I know my swing is a little unorthodox and my approach at the plate is just to make sure I don’t try to do too much.”
He’s a 6-foot-2 guy, so some teams play him to pull the ball. But he takes an easy, lefty swing that produces line drives to left, hard grounders through the left side and bouncers up the middle.
His teammates swear he drives the ball in batting practice, lashing repeated lasers off the right-field wall at Newman Park, but he cuts his swing down when the game starts.
“I’m a different kind of hitter in the games,” Mitchem said. “Probably 75 percent of my hits have been opposite field.”
Rowan County (30-6) is the American Legion state champion and Mitchem’s team-high .458 batting average and 32 RBIs are a big reason why. For someone who isn’t swift to hit .458 is astonishing, but Mitchem is a prolific offensive machine. He has 60 hits — 51 singles and nine doubles. He’s tied for the team lead in hits with Juan Garcia. Mitchem paces the team in walks.
Mitchem hits the left-handed pitchers as well as he does the righties by letting the ball travel a little deeper and swinging a tad later. He seldom strikes out, no matter what arm the pitcher uses.
The major league player Mitchem is reminiscent of is Wade Boggs, a strapping, 6-2 guy who once lined opposite-field singles for Mitchem’s favorite team — the Boston Red Sox. Boggs would hit five homers per season in 600 at-bats.
Like Boggs, Mitchem is numbingly consistent. Rowan can count on him being on base two or three times every game.
“All those walks tells you what a good batting eye Mitchem has,” said Rowan assistant Seth Graham.
Graham coaches West Rowan, while Mitchem graduated from Carson, one of West’s biggest rivals.
“In high school ball, we tried to pitch around Mitchem,” Graham said. “He’s got great hand-to-eye coordination, and he’s one of those guys who can bear down a little bit harder when there are runners on base. He’s showing everybody in Legion ball that his big high school season was no accident.”
Mitchem’s high school season was close to legendary. He broke the Carson record with a .524 batting average. In a 27-game prep season, he drew 16 walks and produced 43 hits — 33 singles and 10 doubles. He received the South Piedmont Conference Player of the Year Award and the Mark Norris Memorial Award as Rowan County Player of the Year. That award is coveted but also adds some pressure.
“Being player of the year does mean more pressure and expectations,” said Caldwell, who won the award in 2014. “But Heath keeps getting hits.”
Rowan head coach Jim Gantt has written Mitchem’s name on the lineup card every game this summer, including once as the left fielder.
“He was county and conference player of the year for a reason,” said Gantt, who will coach Mitchem this fall at Catawba. “He started with a new slate in Legion, but he hasn’t stopped hitting. People can call him a 6-2 Punch-and-Judy hitter if they want to. All I know is he gets the barrel on the ball an awful lot and when he’s got two strikes on him, he shortens up and hits the ball through a hole.”
Mitchem has fit in perfectly in the middle of a lineup that gets an occasional homer from Garcia, Riley Myers or Hunter Shepherd but mostly relies on stringing singles together to produce runs.
“A big part of our success has been guys getting a two-strike single to keep it moving and then passing it on the next guy to get another single,” Gantt said. “I think the rest of the world keeps trying to hit the ball out of the park, but we’ll take the lousy singles.”
•••••
NOTES: Rowan County opens regional play Wednesday against Wheeling, West Va., at 4:30 p.m. at Asheboro’s McCrary Park. … Omar Bautista (4-1) will pitch Game 1 for Rowan. Thursday’s Game 2 starter will depend on whether Myers (6-0) and/or Bryan Ketchie (6-0) are needed in relief in the opener. … Rowan will bus to Asheboro Tuesday morning and will stay in Asheboro, 49 miles away. … Rowan players and coaches were treated to pizza and wings by Terry Osborne and Christo’s Restaurant on Monday evening … Gantt likes this team. “They’ve respected the game all summer,” he said. “I know they want to keep playing as long as they can, and if we keep on doing the little things right, we can continue to be successful.”