Area Sports Briefs: Rowan vs. Wheeling at 4:30 on Wednesday 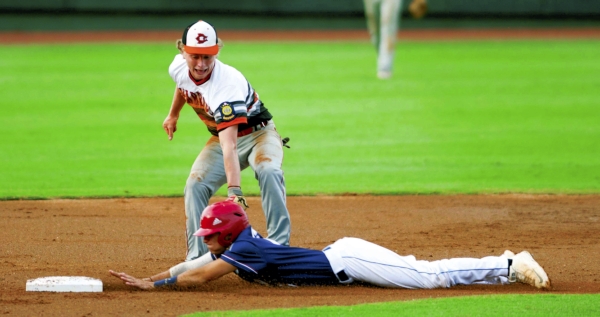 From staff reports
Rowan County plays Wheeling Post 1, the West Virginia champs, at 4:30 p.m. on Wednesday in the third game of the first round of the American Legion baseball Southeast Regional in Asheboro.
Wheeling won its first West Virginia state championship since 1988, but it’s a program that has won 15 state titles.
Rowan County (30-6) will send right-hander Omar Bautista to the mound against Wheeling.
Bautista was the Rowan County Pitcher of the Year with a 9-1 mark in the prep season for West Rowan and has followed up with a strong American Legion season. He’s 4-1 with a 2.47 ERA.
Bautista has walked more batters in the Legion season (24 in 47 innings), but he’s been able to get double-play grounders when he needs them.
Rowan coach Jim Gantt said Thursday’s starter (that game will be at 9:30 a.m. or 4:30 p.m.) will depend on whom he uses out of the bullpen in Game 1.
Right-hander Riley Myers (6-0) and lefty Bryan Ketchie (6-0) are the leading candidates to start on Day 2 of the double-elimination event.
The other starters for Rowan are lefty Hunter Shepherd (5-1) and right-hander Tyler Scruggs (3-1).
The regional at McCrary Park looks different this year, with Virginia (Mid-Atlantic) and Kentucky (Great Lakes) assigned to different regionals, and with West Virginia joining the eight-team Southeast Regional field made up of seven state champs — N.C. S.C., Florida, Georgia, Alabama, Tennessee and West Virginia — and host Randolph County Post 45.
The tournament will start with a bang at 9:30 a.m. when undefeated South Carolina takes on a Florida club that crushed opponents 45-3 on the way to winning its state tournament. Florida won 18-0 in its state-tourney opener.
It won’t be a break for anyone who draws Randolph County. Randolph is tough at home and has been runner-up as the regional host the past two seasons.

Minor leagues
The Kannapolis Intimidators announced the promotion of pitcher Yency Almonte to Winston-Salem and the arrival of former Clemson lefty Zack Erwin to replace him on the roster.
• Kannapolis lost 3-2 to Asheville on Tuesday.
Helmis Rodriguez (8-5) limited Kannapolis to two runs in seven innings.
Brett Austin was the only Kannapolis player with two hits. Mason Robbins tripled. Louie Lechich drove in a run.
• Nick Lomascolo (Catawba) has struck out 61 batters in 50 innings this season. He has a 1-1 record and a 2.34 ERA for Peoria.
Lomascolo has a 1.53 ERA in his last 10 outings.