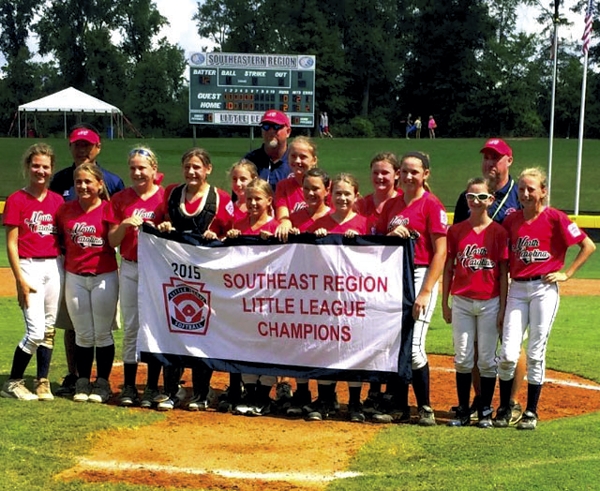 “Tears of happiness or tears of disappointment, I was going to cry either way,” Yang said. “I told them to have fun win or lose, and my tears turned out to be tears of joy. These girls know how to win.”
Rowan’s 12-under team won, 2-0, against Warner Robins, the Georgia champions and the tournament host, on Monday afternoon, finishing off another perfect tournament run. Rowan went 4-0 against the South Carolina, Virginia, Tennessee and Georgia champs, outscoring the opposition 31-4.
“It was a strong field in the regional,” Rowan Little League president Dan Wales said. “West Virginia had outscored teams, 88-0, in its state tournament and went 0-2 in Georgia.”
Kali Morton pitched a two-hitter against Georgia and struck out nine as Rowan prevailed against a bigger, older, more experienced squad that had a big crowd supporting it.
“These girls over-achieved,” Wales said. “We’re a year early to be doing this. Most of our girls have a league age of 11.”
Yang agreed with that assessment.
“Did I think we could win the regional this year — no, honestly I didn’t,” Yang said. “A realistic goal was just to get to the regional. But you win one game and then you win another game — then you realize you’ve got a chance to do it. This is a special group of girls. The coaches got excited, the coaches had sleepless nights worrying about things, but the girls always stayed calm.”
Eight of the 13 girls on this year’s regional champs also won the 10-under regional championship in Tennessee last summer.
The big difference this time is that the 2014 season ended for Rowan Little League once the 9-10 regional title was secured. But the 11-12 age group gets to keep playing. They’ll leave on Aug. 11 for the Little League World Series in Portland, Ore., the softball equivalent of the famed Little League Baseball World Series in Williamsport, Pa.
Ten teams — six American and four international — are gathering in Oregon for the World Series.
Rowan Little League will be in a tournament that includes Canada, Uganda, Puerto Rico and The Philippines in addition to six USA regional champs.
Rowan will play the Canadian champions — Layritz Little League of Victoria, British Columbia — in the first round on Aug. 13.
The girls will receive major goodies in Oregon — Easton bats, helmets and batting gloves. Rowan will even be on ESPN if it reaches the semifinals.
Yang said the team will embark on its next adventure on Aug. 11 and will return Aug. 20. Little League will pay the expenses for the players and coaches, but not for parents.
“It’s a really big stage we’re going be playing on,” Yang said. “I’m not sure if it’s sunk in with everyone yet just how big a deal this is. We’ve had Little League softball here for just six years and we’ve got about 100 girls playing. We’ve been playing against teams with four or five times our population. What these girls have accomplished is amazing.”
The Rowan Little League team began all-star play by hosting the district tournament and went 4-0. Rowan then went 4-0 in the state tournament before sweeping the regional to raise its record to 12-0.
Rowan has five shutouts and has won seven of its 12 games by the 10-run rule. For the season, Rowan has outscored opponents 129-12.
In the regional, Taylor Walton, Taylor Sanborn and Morton had two RBIs each in a 10-0 win against South Carolina.
Caylie Keller and Kary Hales drove in two runs each in an 11-1 win against Virginia.
Ellen Yang and Morton drove in two runs each in an 8-3 win against Tennessee.
Then Morton, with help from catcher Caitlin Mann, dominated the title game with Georgia. Kaylin Dowling drove in a run for a 1-0 lead in the first inning. Rowan made it 2-0 in the fourth inning. Rowan was held to three hits, two by Allison Ennis and one by Yang, but it made them count.
A crowd welcomed the girls back to their home field at Hurley Community Park on Monday evening, and there were more tears of happiness.
“Can you imagine it?” Wales said. “Little ol’ Rowan is in the World Series.”