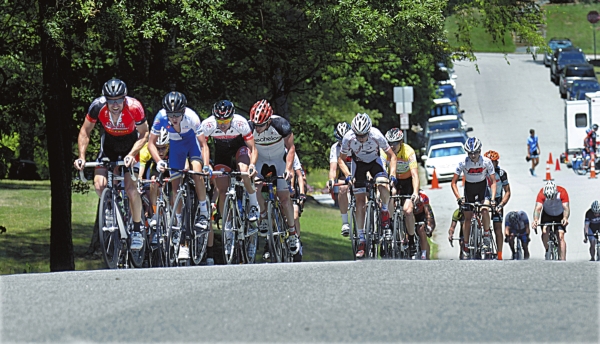 A small crowd braved the heat and gathered to cheer on the 400 or so cyclists who circled a mile-long course around Salisbury City Park Sunday.

The cyclists whizzed past the spectators time and time again as they pursued one last opportunity to improve their standing in the 2015 Crossroads Classic, a four-day event held in four different venues around the Piedmont area of North Carolina.

“It’s the premier series on the Southeast coast for amateur racing,” said John Fender, a Salisbury resident who races with Clemons Cycling.

Fender and fellow Salisbury resident Jeff Safrit say they enjoy racing in their backyard, adding that local riders will often come out to cheer them on

“Everything is good about the hometown race except the dreaded hills,” Safrit said. He races with Bikesource.

This year, Crossroads Classic began in downtown Mocksville on Thursday before traveling to Statesville on Friday, Asheboro on Saturday and finishing in Salisbury on Sunday. Each race takes place in a downtown venue, and cyclists travel from town to town to compete each day.

Six days was “too much of a commitment” for many of the competitors, he said.

This year, participants ranged in ages from two 10-year-olds up to 60 year-old Paul Steagall from Florence, S.C. The cyclists hailed from nine states plus Washington, D.C., including California, Wisconsin and Florida.

Boyd said that the series is 15 years old and Salisbury has been involved for the last 13 or so years.

After spending three days in crowded, downtown venues, Boyd said the race around Salisbury’s City park was “safe” and a “little more chill,” but that the hills leading up to the finish line are brutal.

“We’ve done City Park as the final for many years,” he said. “It’s a tough race for a final.”

In the past, cyclists also competed in downtown Salisbury during the Crossroads Classic as well, Fender and Safrit said.

Fender explained that there were typically “hundreds of spectators.”

“The streets were lined,” Safrit added.