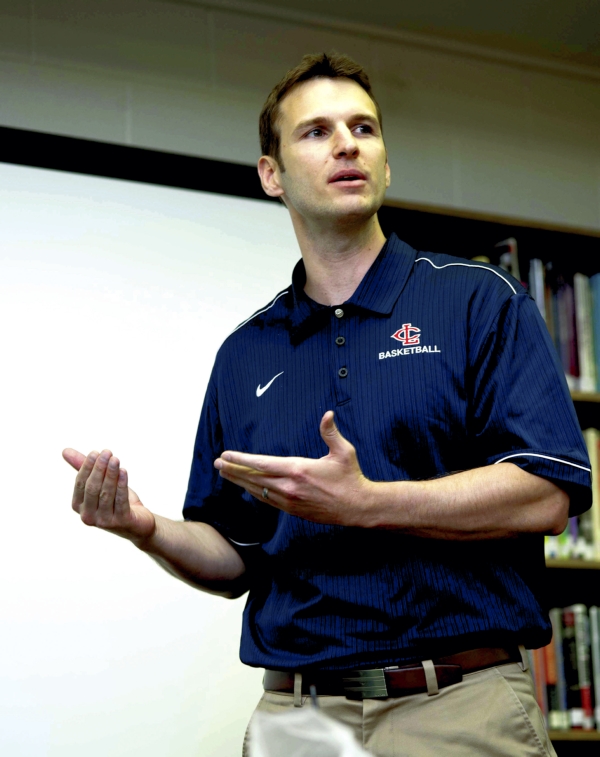 The West Rowan High School graduate has come a long way. A decade ago, he was a volunteer coach at Toledo, working 12 hours a day (9 a.m. to 9 p.m.) — for free.

“I didn’t make a dime for a year,” Vanderslice said in a phone interview. “I was just trying to impress people that I was willing to work hard. That season as a volunteer got my foot in the door to do what I love.”

Vanderslice has loved the game a long time. He was a good player at West Rowan. As a senior in 1997, he was part of a unique state championship team. The Falcons won the 2A title without any individual averaging more than 12 points per game. That team did have a freshman named Scooter Sherrill, who averaged 10.9 points and was huge in the stretch run. Vanderslice averaged 7.3.

Vanderslice went to UNC Asheville and was on the team, but he knew playing time at a NCAA Division I school would be scarce.

“I wanted to be a coach,” Vanderslice said. “I went to Asheville to learn from Coach (Eddie) Biedenbach because he was experienced and knowledgeable.”

After graduating from UNC Asheville with a degree in business administration, the next stop for Vanderslice was Heidelberg, a Division III school in Ohio. He was there two seasons, earned his master’s degree and searched for the next basketball opportunity. It wasn’t easy to find.

That’s when he went to work as a volunteer assistant at Toledo University.

“I just kind of grinded it out each day,” Vanderslice said.

His dedication as a volunteer led to being named Toledo’s director of basketball operations. Eventually, he became a full-time, salaried assistant coach.

He moved on from Toledo to Furman. After two seasons as a Furman assistant, he got a chance to run his own program back in North Carolina at Louisburg College.

Vanderslice enjoyed runaway success at Louisburg — 152-20 in five seasons with a string of conference titles and district coach of the year honors. His team was ranked No. 1 nationally in the 2013 junior college rankings when it went 35-2. His hoops philosophy was simple — defend, rebound and run. Players bought in. Wins piled up.

The USC Aiken position came open in June when coach Vince Alexander moved on to St. Leo.
Vanderslice had interest — and an unexpected connection. USC Aiken AD Randy Warrick was once an All-America baseball player at Louisburg.

“We had Louisburg in common and all the dots connected,” Vanderslice said. “I had a phone interview and I could feel momentum growing. Then, the in-person interview went great.”

Basketball is king in the PBC, where teams play in arenas rather than gyms.

While USC Aiken’s Pacers didn’t have a banner season in 2014-15, they made the Final Four just two seasons ago and was in the Elite Eight three seasons ago. Expectations will be high. Vanderslice will work to bring USC Aiken championships.
“My life has been on fast-forward since I was hired,” Vanderslice said. “I’ve gotten more congratulatory texts than I can count. I have two responses to everybody — “Thanks so much” and “Do you know of any unsigned point guards?”

Anytime a coach leaves, players follow, and Vanderslice still has some roster holes to fill. Still, there are no negatives about his new job. His wife, Jennifer, is a South Carolina grad and will be 45 minutes away from her family in Columbia.

“When I was hired I thought I was the most excited person in the world, but when I told my wife, I found out I was only the second most excited,” Vanderslice said with a laugh.

The other member of the family is 9-month-old Scottlyn. She’s named after Vanderslice’s father, Scott, a long-time Salisbury resident.

Sometimes Vanderslice thinks back to that year in Ohio when he didn’t make a dime and wondered if he’d be able to make a living doing what he loves.

He’s convinced the twisting, turning journey that has led him to Aiken, S.C., has been worthwhile.

“It’s all worked out for me,” he said. “And now a great school has given me an unbelievable opportunity.”