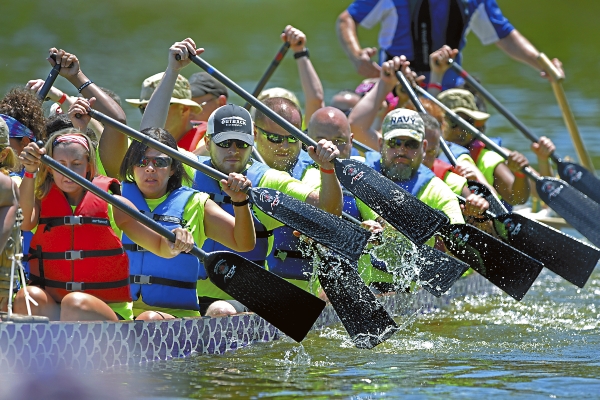 “The first year, we had 16 teams, and this year we have 26 teams,” said Chamber President Elaine Spalding.

She estimated that there were roughly 3,000 people in attendance, far surpassing the expected number of 1,500.

Dragon Boat racing dates back to ancient China — more than 2,300 years ago. Today, teams of 20 paddle 45-foot long boats decorated with dragon heads, tails and scales on a 350 meter straight course. A drummer sits in the bow of the boat pounding a drum to keep the paddlers’ strokes in rhythm. The teams participated in three heats.

High Five Dragon Boat, a Dragon Boat race company, facilitated the race once again this year. While the company provided all the equipment, as well as a practice session for teams, the Chamber of Commerce was responsible for gathering the vendors and creating a fun atmosphere.

High Five Dragon’s philosophy is, “you guys put on the festival, we’ll put on the race,” Spalding said.

The group agreed that there were already too many golf events in Rowan County, so they decided to look outside the box. Spalding had participated in a Dragon Boat race in Kentucky, so when it was suggested, the idea of hosting a Dragon Boat festival was an immediate hit.

It didn’t hurt that the event would highlight one of Rowan County’s greatest assets — High Rock Lake.

“This is the perfect fit for Rowan County,” Spalding said.

“It’s a really good team building exercise,” she said, adding that many of the county’s major employers put together teams to compete.

“It’s been very competitive,” Spalding said. “Every one of the races have been neck and neck.”

Brittany Rabon and Whitney Moten, Trinity at Home employees, competed with their Trinity Oaks colleagues and said the festival was “awesome.”

“We can’t wait for next year,” Rabon said.

Moten said their team’s first heat was “terrible,” but they were “getting better with practice.”

The best part, however, was the fun and fellowship between the races, they said.

Novant Health had a large representation at the festival as well.

Doug Cline competed on the High Rock Lake Association Board’s boat. Living on the lake, Cline understands what a valuable asset it is to the local community.

He said he enjoyed seeing the unity the festival brought to the community and described it as “good, clean fun.”

“It really is a great economic generator for the entire region,” Spalding said, adding that several teams came from out of town to compete.

Former pupils of Neely School were once again welcomed into the one-room schoolhouse by the pealing of the schoolhouse bell... read more