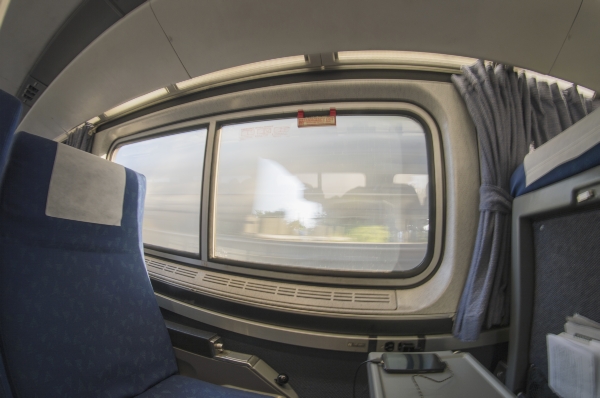 Suddenly I’m hurtling through the black night without any sense of direction.

Confused and tired, I reach over for my phone. It’s nearly dead. If there’s anything on the battery meter, I can’t see it. Then, the phone goes black.

A person sitting next to me, whom I’ve never met, seen or talked to before, leans over and whispers “we’re somewhere in South Carolina.”

Normally, being somewhere in South Carolina might sound enticing if I knew exactly the location of “somewhere.”

This time, I needed to be in New Orleans by 7 p.m., and was eager to see my immediate family members during a brief vacation. I’d decided to take an Amtrak train to get to my destination. I decided traveling by train would be a unique journey.

I looked around. Nearly every seat around me was filled with a body. Some motionless and asleep. Others fidgeted with a brightly lit rectangle that could only be a smartphone. Throughout my trip, I noticed many passengers pulling up map applications on their smartphones to keep track of our exact whereabouts.

I tried to collect my thoughts. I had gotten on an Amtrak train in Salisbury at about 1:30 a.m. on Saturday. I’d been half awake when we pulled into Charlotte. The momentary lack of motion must have lulled me to sleep.

A speaker placed somewhere above my head began to speak. We were nearing Greenville, S.C. I hadn’t been asleep long.

It was a strange set of circumstances — to be sleeping next to one complete stranger and a range of distances away from several other strangers.

I poked my head up from my seat and looked around. The man behind me had gotten on in Salisbury, too. I recognized his face.

The man, whose name I never asked for, was talking with his seat-mate about an Amtrak incident in Salisbury where a train had killed a man sitting on the tracks. It had only happened one day earlier. The man from Salisbury guessed there must have been four or five people killed by trains over the past year. He was right. The number is four since the beginning of 2015, according to federal records.

Listening to others speaking was fun, especially if your seat-mate wasn’t interested in firing up a conversation.

At one point on my Amtrak trip to New Orleans, a man and women near me were discussing relationships. From the sound of things, she was flirting with him. It wasn’t clear if he was taking the hint.

Other than being nosy, there isn’t much to do on a train. Bring a book, bring a smartphone, observe the passing scenery, or record your thoughts to write about later.

Once light creeped above the horizon and night turned to day, there was more to see. Instead of dimly lit buildings and window reflections from inside the train, the small towns and cities came into view.

You’ll board the train with perhaps a handful of other people in Salisbury, which isn’t a very large train station. By comparison, in Atlanta more than 160 people boarded the train on the way back to Salisbury. The large number filled my car to the brim.

Upon boarding, Amtrak staff asked for a ticket and perhaps identification — in New Orleans they demanded some sort of identification from everyone, and at other stops they didn’t ask.

Once on the train, they’ll either let you pick a seat or assign one to you. When I boarded in Salisbury headed south, all train cars were filled and the staff politely asked passengers to sit in certain seats.

In New Orleans, it was less crowded. The staff members, however, were less than polite. At one point, one of the staff members opened the door to one of the restrooms and yelled at the person inside, “Close the damn door, no one wants to see that.”

She opened the door to a restroom. What was she expecting?

Perhaps embarrassed by the stares of several nearby moms, the woman promptly apologized and continued about her duties.

I spent about 36 hours in New Orleans, mingling with family members and exploring the Crescent City. The final, total count of my hours on an Amtrak train was 38 — about 18.5 to New Orleans and 19.5 back to Salisbury.

The trip was interesting and unusual — not many people travel by train in the 21st century — but I’m not sure I’d do it again. The accommodations are about the same, if not better, than riding on an airplane. Food cars offer the opportunity to sit and browse the Internet, if the car has Wi-Fi. The Crescent Route doesn’t have internet access.

The freedom to walk around is also helpful.

The immense amount of time required to make lengthy trips on a train worsens the trip experience. For short trips, it’s surely a more enjoyable experience. A sleeper car or first class ticket would also likely improve a train trip.

Darrell Blackwelder: So long and thanks for everything

Throughout my career with the Cooperative Extension Service, one of my goals was to teach proper planting to conduct ongoing... read more