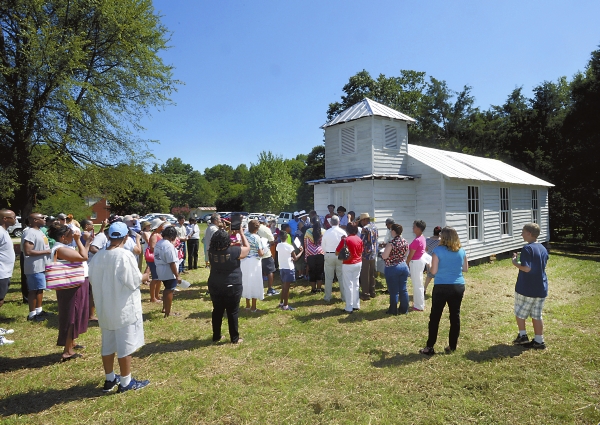 A large crowd gathered outside the restored Historic Neely School that served African American children in the early 1900's for the ribbon cutting in 2015. Photo by Wayne Hinshaw, for the Salisbury Post.

Former pupils of Neely School were once again welcomed into the one-room schoolhouse by the pealing of the schoolhouse bell Saturday morning.

Built by her grandfather, Julius Erastus Neely, in 1908, the schoolhouse operated for 40 years, educating young African-American children during a time when education was not readily available to them.

Five years ago, Grissom and several other of Neely’s grandchildren decided to breathe new life into the nearly forgotten schoolhouse.

“We wanted to keep my grandfather’s legacy alive,” said Phyllis Thomside. “He took it upon himself to build the school for his children and the community.”

“Granddad did it all alone,” Grissom said.

When the grandchildren decided to restore the schoolhouse, they also decided to move it up about a quarter mile out of the woods to the site of the home where Neely and his wife, Katie McKenzie Neely, lived.

“He hid it (the schoolhouse) back in the woods to keep the KKK from burning it down,” Grissom said.

It was so far back in the woods, she said they had to ride on a tractor to get to the site.

“You could not see the building,” she said.

When the project began, there was lots of work to do. The schoolhouse had been vandalized. The windows had been broken, and the bell had been stolen.

“We had to redo the floor completely,” Grissom added.

In order to increase the schoolhouse’s chances of being listed on the National Registry of Historic Places, however, they had to keep as much of the original building intact as possible. Several community members donated historic artifacts, such as a potbelly stove and oil lamps, to the foundation.

The foundation, comprising several of Neely’s grandchildren, raised money and applied for grants to cover the cost of the renovation.

“We weren’t turned down one time,” Grissom said. “We are successful.”

During Saturday’s ribbon cutting, family and community members gathered outside the Neely Schoolhouse to celebrate its reopening — this time as a historic site.

“I used to sit on this side,” Thomside told a younger family member as she walked into the newly renovated schoolhouse.

Thomside said there were about 25 students when she attended Neely School.

“We used to stay across the river,” she said. “We used to walk here every morning.”

The restored schoolhouse building is accompanied by a quarter-mile nature trail, and Grissom said there are plans for a play area, picnic shelter and eventually a programming center.

David Freeze: A most special day