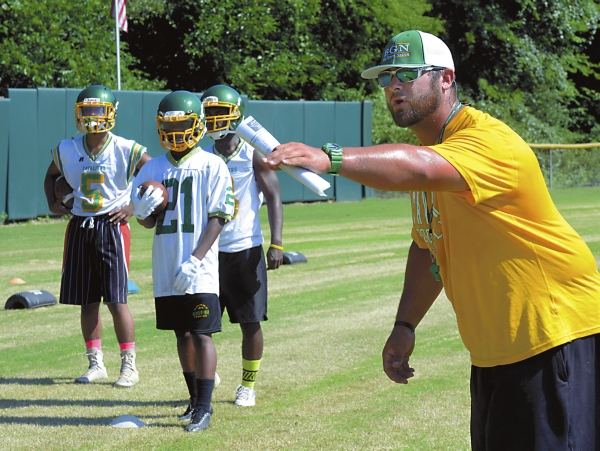 The former West Rowan running back, Coastal Carolina fullback and North and Carson assistant, looked content as he tossed out tough love to a sweaty squad that took a knee in right field on the Cavaliers’ baseball facility.
“I’m pleased with the turnout,” Hampton said. “We’ve got about 75 kids out here and there are maybe another 10 players we know we’ll have. Some of them may not have had a way to get here today.”
That’s plenty of players for a 2A school.
Hampton will have lots of help coaching them. There were a dozen or so coaches on hand.
That group included familiar faces such as Bill Kesler, Steve Williams, Rodney Goodine, Kelly Everhart, Josh Sophia and Aaron Rimer. There also were new faces such as quarterback guru Bobby Myers, who starred for the Cavaliers in the late 1970s and for Catawba in 1983-84, and former Catawba defensive lineman Piotr Kalinowski.
Hampton’s younger brother, Patrick, will help coach the offensive line.
“We’ve got a pretty full staff,” Hampton said. “We didn’t lose any assistants (when former North head coach Joe Nixon took the West Rowan job) and we’ve added quite a few guys. It’s a good situation. No one should have to do two things at once.”
Hampton, who also wears the AD hat at North, had to juggle assignments all summer. He’s the head coach for the Southern Rowan American Legion team, and he finished out his baseball commitment even after he was named North’s head coach. He insists the Cavaliers didn’t miss a beat during the summer months.
“Rodney Goodine and Josh Sophia stepped in to lead weightlifting workouts on evenings when I had Legion ball,” Hampton said. “And luckily, I didn’t miss any of our 7-on-7 competitions.”
In the past three seasons, North Rowan has won 31 games and the Cavaliers have earned back-to-back Central Carolina Conference championships. Nixon’s leadership elevated the program to a No. 1 ranking in 2A for much of the 2013 season.
The challenge facing Hampton is maintaining that level of success without the No. 4 rusher (JaReke Chambers), the No. 8 passer (Alexis Archie) and the No. 11 receiver (Sakil Harrison) in Rowan County history. All three were three-year fixtures for North’s offense.
Hampton, who will call the plays, will be directly involved in coaching up the replacement running backs and he’ll work closely with Myers on developing a quality quarterback.
“We’ve got four solid running backs who are athletic, fast and pretty strong,” Hampton said. “We’ve got two QBs (junior Corbin Smith and sophomore Josh Ellis) who have been to the camps and they’re coming along. We lost a really big senior class, so there are holes and there are positions open, but our kids have that fearless factor. I have confidence in them.”
Hampton said the Cavaliers “will look to their defense” while the offense gains experience.
That makes sense. The most familiar faces on the field are defensive guys – Zion DeBose, Jake Pritchard, Stevie Thurston, Omar Lipscomb and Javin Goodine.
The schedule will look a bit different. Playing in the six-team CCC, North has to scramble to find six non-conference opponents to fill an 11-game schedule.
North Rowan will again play 3As East Rowan, Carson and Statesville and 4A Davie outside its league. Providence Grove and Forest Hills dropped the Cavaliers after a two-year, home-and-home agreement, and North has replaced them with West Stokes and South Iredell.
North will scrimmage at South Rowan on Aug. 12.
“That’s when the BBs start flying, and we’ll find out how far along we are,” Hampton said.
North also will participate in a marquee jamboree at Rocky River on Aug. 14. The Cavaliers are matched up with Cuthbertson. Cuthbertson QB Austin Kendall is a Tennessee commitment, so that should be a test for North’s defense.