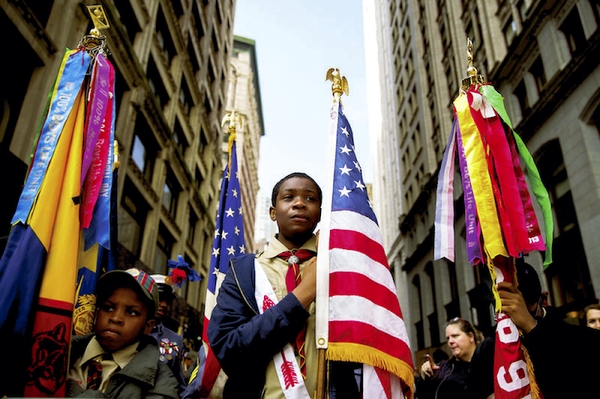 SALT LAKE CITY – For many years, the LDS Church has discussed breaking away from the Boy Scouts of America, but the group’s decision this week to admit “openly gay leaders” into its ranks may finally push the Utah-based faith to bolt.

LDS Church spokesman Eric Hawkins confirmed Tuesday that the 15 million-member Church of Jesus Christ of Latter-day Saints is “considering creating its own international program for boys, separate from the Boy Scouts of America.”

That could have dire financial consequences for BSA. The LDS Church is far and away the nation’s largest Scouting sponsor, serving 437,160 boys in 37,933 troops.

In 2013, more than a third (37 percent) of troops were LDS sponsored, accounting for 18 percent of the BSA’s 2.4 million total membership (Mormon troops, while more numerous, tend to be smaller in size).

In a news release, The LDS Church explained some reasons why it is considering leaving.

As a “global organization with members in 170 countries, the church has long been evaluating the limitations that fully one-half of its youth face where Scouting is not available,” the release said. “Those worldwide needs combined with this vote by the BSA National Executive Board will be carefully reviewed by the leaders of the church in the weeks ahead.”

The policy change approved Monday evening by the BSA’s 80-member National Executive Board to allow gay leaders  in Scout troops “is inconsistent with the doctrines of the church,” the release added, “and what have traditionally been the values of the Boy Scouts of America.”

Although the LDS Church allows openly  gay Mormons to serve in church assignments, including the Boy Scouts, these members are deemed to be living the faith’s standards. This means they are not acting on their same-sex attractions.

The BSA’s new policy, however, makes no such distinction between “openly gay” and “sexually active gay leaders.” So a gay Scout leader could have a partner or a same-sex spouse — and that troubles the Mormon brass.

While the BSA insists that religiously affiliated troops, including those sponsored by the LDS Church, can continue to ban gay leaders, many observers doubt such an exemption can be legally defended.

Ironically, he said, “in some countries Mormon youth have a better chance of being a Scout than their LDS counterparts in the United States (who feel confined to Mormon Scouting) by virtue of Scouting being available to girls.”

All this “concern over ‘one-half of its youth’ internationally (boys), Head wrote, “but seemingly little interest in the half of its non-Scouting youth in the U.S. (girls).”

In Canada, for example, “Scouting is open to girls,” he said, “but the church won an exemption to run boys-only troops.”

For his part, Mitch Mayne, a gay Latter-day Saint in the Bay Area, was disappointed by the church’s response to the Scouts’ move.

The BSA policy change “explicitly included room for us, as Mormons, to continue to call Scout leaders we deem worthy according to our principles,” he said, “a form of religious freedom that we’ve heralded as critical, and that we have been granted.”

Given that, the church’s statement seems “more than just unnecessary — it feels angry, afraid and punitive,” Mayne said. “These are not qualities most of us associate with our Savior.”

Neta Monroe: Some Hear But Blessed are Those Who Hear and See

While reading one of my favorite devotionals this morning, (from Joseph Prince) this scripture was used, and it really blessed... read more