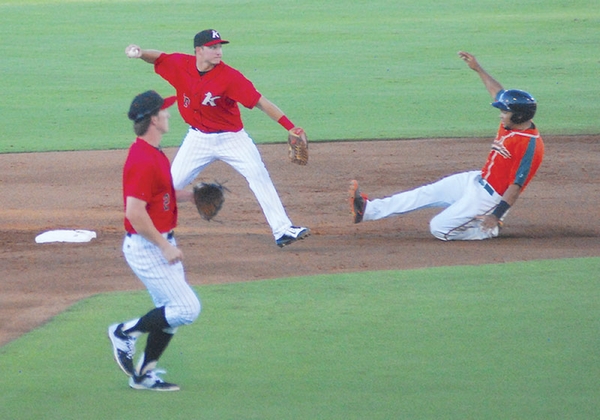 ADAM HOUSTON / SALISBURY POST Kannapolis second baseman Ethan Gross (middle), after getting the force out on Greensboro's Justin Twine, gets ready to fire the throw from shortstop Toby Thomas (front) to first base for an inning-ending double play on Friday at Intimidators Stadium presented by Carolinas HealthCare System.

KANNAPOLIS — Intimidators manager Tommy Thompson summed up Thursday’s South Atlantic League struggle with four little words.
“We got a break,” Thompson said.
Kannapolis (53-50 overall, 18-16 second half) beat the visiting Greensboro Grasshoppers 4-3 on Jon Ziznewski’s walkoff single.
It was a three-part game.
Greensboro starting pitcher Enderson Franco struck out the side in the fourth and dominated for five innings as his team took a 3-0 lead.
Then Kannapolis got to Franco in the sixth to tie the game.
Then the Intimidators got that break Thompson referred to in the ninth.
“We made good defensive plays that kept the deficit at 3-0,” Thompson said. “I like the fight we showed after we got down. Last night (a 10-2 loss to the Grasshoppers), we didn’t show that kind of fight.”
The sixth was fun for Kannapolis. No. 9 batter Ryan Plourde blooped a double, and Michael Suiter extended his hitting streak to 10 games with a run-scoring double. Mason Robbins smashed one through the right side, extending his own hitting streak to nine games and giving the Intimidators runners at first and third. Louie Lechich’s RBI bounceout cut Greensboro’s lead to 3-2. A wild pitch made it 3-3.
“We showed some patience at the plate, put a few hits together and battled back,” Ziznewski said.
Kannapolis starter Yelmison Peralta lasted five decent innings. Then the bullpen was sensational. Matt Salgado threw three scoreless innings. Closer Matt Cooper pitched the ninth and got the win.
It was still 3-3 heading to the bottom of the ninth, and Lechich opened the inning with a solid single.
Thompson then sent up Ryan Leonards as a pinch-hitter with orders to bunt. Leonards finally got the bunt down on an 0-2 pitch. It fell halfway between the mound and the plate and Leonards beat the throw to first to give Kannapolis two on with none out.
Toby Thomas also tried to bunt but struck out.
“We wanted to move the guys up another base to put the pressure on their defense,” Thompson said.
Cody Daily was next and his hot grounder right at the second baseman seemed certain to be turned into an inning-ending double play. Extra innings loomed.
“Cody hit it really hard on the ground and it looked like a sure double play,” Ziznewski said. “But we got a break when the ball popped out of the first baseman’s mitt.”
Ziznewski turned that break into a victory when he slapped an 0-1 slider into right field to plate Lechich.
“The first pitch was a fastball, a better pitch to hit, but I missed it,” Ziznewski said. “But I got enough of that slider to get it over the infield — and I hit it where no one could get to it.”
The bottom line was a victory.
“That was an exciting one for the fans and for us,” Thompson said. “They gave us an opportunity when they couldn’t turn the double play, and Ziznewski came through with a clutch hit.”