Darrell Blackwelder: Oustanding in his field 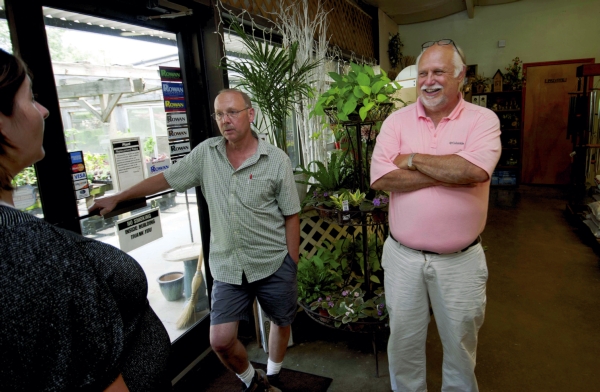 After 32 years of fielding questions and standing out in fields, Darrell Blackwelder has retired from Cooperative Extension.

Not just from his position as director of the Rowan County office, but completely. He won’t be answering questions about bees or identifying weird plants and insects.

“I really, really hate losing him,” says Danelle Cutting, the horticulture and local foods agent. “He’s earned it, but I’m going to hate not having him here. Monday morning, oooh,” she trails off.

“He’s really a very intelligent person so when people come in he has an answer,” says Melva Menius, an administrative assistant.

“I think Darrell is a great visionary,” says Toi Degree, food and consumer science agent, who has worked with him for nine years. “He always comes to us with great ideas that he likes to share. ‘Let’s try this.’ When I implement his ideas, I usually have a good turnout. I’m going to miss his ideas.”

“My mom was one of his Master Gardeners,” Cutting says. “I did a volunteer internship with him. He’s been there through it all, he helped my mother.”

Darrell suggested to a young Cutting that she consider being an extension agent. She wasn’t sure about it at first, but after selling produce, she realized she really wanted to help people.

“He’s very easygoing with people,” says Menius. “He has a good rapport with them. He’s good with the public.”

Darrell has been a horticulture agent in Rowan and Davie counties for 32 years, the last five as director of the Rowan office. He’s been interim director twice, January-August 2001 and August 2010-June 2011.

And he’s kept up with his professional certifications; he has a landscapers’ license and one in pesticide. He’s also a certified plant professional.

“My favorite part of the job is trying to figure out problems, solving problems with people and writing for the paper,” Darrell says. “And the radio program. I like that.”

He taught school for six months, then someone from Cooperative Extension told him if he got a master’s degree, he’d have a job. So that’s what he did.

He started in Rowan County in 1979, when Harold Caudill was the director. He’s worked with three other directors, Amelia Watts, Jim Cowden and in Davie County, where he worked 1989-1993, Ronnie Thompson.

Darrell started out doing education programs for commercial producers and homeowners, worked with Master Gardeners and helped with 4-H and forestry.

His awards include Young Agriculture Extension Agent of the Southwest District in 1986, communications awards in 2006 and 2007, and the recent service award.

Over the years, a lot of people have assumed he worked for the Salisbury Post because of his frequent articles and columns. It started out with one article a month. The problem was, by the time he got to answer questions, it was too late.

He convinced then managing editor Linda Bailey that he had to write weekly. “I had plenty of material.”

But he knew how to write a complete sentence. He knew 1,000 words was probably too much and he wanted to avoid first person. “No one cares what I think. They want information, fast and correct.”

He always liked the question-and-answer format as a way to cover many answers and give people a quick reference. He had no interest in doing a garden journal.

He “never really wanted to be a director” until the last time the job opened. “I figured it wasn’t too bad.”

In his years in Extension, so much has changed. “When I first started, we had three lawn care companies. Migrant labor had just started … and the Farmers Market was not popular because everyone had their own garden.

“I used to do lawn care classes and it went from 75 people to 50 to 20 to six. No one cuts their grass anymore.

“Tomato pickers were teen-agers doing a summer job. There were lots of football players. … We had 40 dairies then, now we have 12.”

Rowan has been classified as an urban county now, but agriculture is still a $50 million business, “and that doesn’t count the golf courses and nurseries.”

He doesn’t know what the future will hold. “I am 20 years older than the next oldest agent.” New agents are young and tend to work just a couple years before moving on. He thinks Extension will become more specialized and use more media.

“There’s a big focus on youth and sustainability and local food.”

He laughs when asked to tell some of his favorite stories. He knows too many people for some stories to be publicized, but he mentions a typical exchange.

Some guy calls and he wants to plant 6 acres of Christmas trees, or 12 acres of blueberries. Does he realize how long it takes to grow to Christmas tree or how quickly 6 acres will be wiped out? Who is he going to sell blueberries to? “I don’t tell them it’s a dumb idea. I say, ‘It will be very difficult for you to succeed at that.’ They haven’t thought it through, “So they say, ‘You didn’t help me at all.'”

“I try to be realistic with their expectations. You have to have knowledge, as well as desire.” He told Amie and Tommy Baudoin of Morgan Ridge a vineyard would not do well on their land. “But they worked really, really hard and succeeded.”

One of his recent favorites was a guy who called, sounding desperate: “The deer are eating my marijuana! What can I do?”

“Working with the public is interesting. It’s not like going to a factory or a school. Extension involves weather, clients, diseases, crops, attitudes. … It’s never the same.”

Darrell says he’s enjoyed the people he’s worked with and the effect it has had. “We have one of the best supported Extensions in the state.”

His coworkers praise him for listening, making suggestions and supporting their decisions.

“He’s definitely got the big picture in mind,” Cutting says. “He always motivates you, pushes you to do the best you can. We’re going to miss his ideas” such as getting agents to collaborate on a project. “If I ever needed anything, he’s definitely been there,” Cutting says.

“I think Darrell is a great visionary,” Degree says. “He’s a living legend around here. Everyone knows Darrell. He’s done so much with our presence in the paper, getting on the radio and keeping us out in the public eye. He’s very supportive of anything you want to do. He always asks, ‘What can I do to help you?’

“It’s going to be different; it’s hard to see him go,” Degree says. “You’re going to choke me up,” she adds.

Darrell’s friendly greeting to women is “Hey, girl!” and Degree loves that. “No matter how many times a day he sees you, he always talks to you,” she says.

Darrell will miss his staff, but he won’t miss doing evaluations and budgets.

He hopes the search for a new director is quick, especially with the fair coming up soon. “Our business is continuously learning and then conveying information. We’re out of the office a lot.”

He’s not going to sit in a hammock and doze after retirement. He wants to travel, as does wife Gerrie, who retired from Rowan-Salisbury Schools in 2010. “We like to go to New York and see plays. I want to do more farm tours. We have beach property,” inherited from his father.

He’s already making plans for a farm tour in Ireland. They’ve been to the Kentucky Derby and the Westminster Dog Show. He wants to landscape around his house.

He had planned to leave quietly, and has already cleaned out his office. People started to tell him he had to have some kind of party. “Apparently, people want to say goodbye,” he says, “Du-uhh. I guess I can do that. I mean, if that’s what the people want,” he laughs.

“No one can fill Darrell’s shoes,” Cutting says. “Whoever comes, we can’t expect them to be Darrell. We’ve got to let them have a chance.”