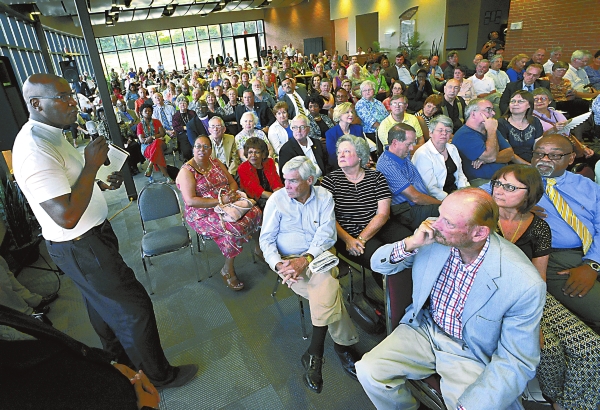 SALISBURY — Stephen Pocklington said his heritage is what he starts making today and that he creates a new heritage “when I stand for something different.”

Pocklington was one of  many speakers Thursday night at a community forum called “Beginning a Healing Conversation.”

Held at Hood Theological Seminary and including a panel of seven mostly religious leaders in the community, the evening was designed “to foster better relations, respect and understanding regarding race, justice and peace.”

Panelists and members of the audience who shared their views spoke of owning up to the past, seeing history from all perspectives, getting past white privilege, asking tough questions on race, building person-to-person relationships, making the right investments in people, finding solutions and, above all, continuing the conversation.

The Rev. Dr. Grant Harrison, presiding elder for the Salisbury District of the AME Zion Church, said his prayer was that business as usual will not be possible and people understand “we are in this together.”

The Rev. Dr. Jim Dunkin, senior pastor of First Presbyterian Church, described some regular coffees pastors are having and how plans are in the works for monthly events when the whole community comes together and hopefully starts moving to a new level of communication.

When he talks with couples in his church who are preparing to be married, Dunkin said the most important thing they discuss is conflict resolution.

In the moment of conflict, he asks the man and woman, how do they each contribute to the problem?

The same should be done when talking about conflicts related to race, Dunkin suggested.

“What are all of us doing to contribute to these problems?” he asked.

Until that question is answered, he added, the community can’t move forward.

Harrison said you can’t just talk about respect. Rather, it must be about mutual respect. When people bring up their heritage, they also must think about how that heritage “hurt people like me,” Harrison said.

“This is a shared history,” Harrison said. “We don’t live in a vacuum.”

The panelists were asked to share their thoughts for three to five minutes each, then the floor was opened to discussion from the crowd.

In his newest book,Walden said, he makes a strong argument that secular communities do better with race relations because they demand diversity and respect.

The community must look for ways that people of faith can build more bridges, and doing so will take time, intentionality and courage, Walden said, adding that the world, country, state and Salisbury all need it.

Conforti said he can’t help but trace the reality of white privilege in his life and how many times he has benefited from it, even without realizing it.

For conversations to move forward, Conforti said, whites need to come to grips with white privilege, which ignores the realities “so many others experience.”

Mares, a white pastor, said the conversation about race has to open up space where everyone can own up to the dumb, ignorant stuff they’ve said and thought in their lifetimes and realize what it means to be in relationship. Only then can you have a dialogue that’s important, she said.

Freeze said the deadly shootings this summer of nine African-American members of Emanuel AME Zion Church in Charleston, including the Rev. Clementa Pinckney, means the story of the South will never be the same.

“The ship of the South has sailed, and the Rev. Pinkney was the tugboat captain,” Freeze said.

The symbolism of what happened was astonishing and profound, Freeze added. The church is located in a section of Charleston where many slaves first touched ground in America. Meanwhile, the suspected shooter, Dylann Roof, was apprehended after the shootings on Dixon Boulevard in Shelby.

Dixon Boulevard is named for the author of “Birth of a Nation,” Thomas Dixon Jr., and where Roof was caught, Freeze said, was less than a mile from Dixon’s grave.

Dunkin recalled how 300 people in the Salisbury community came together at the Bell Tower after the Charleston shootings. It was an event organized by Dunkin and Bates.

Bates, who has lived in Salisbury his whole life, noted the community forum Thursday night was about healing.

“We must be willing to recognize that we are sick, and healing must take place,” Bates said. “Everything is not OK in Rowan County.”

Bates said Salisbury and Rowan County must start tackling the tough questions, realizing that the community is not immune to the kinds of things happening elsewhere. He also emphasized that “we have to start bringing the right people to the table.”

William Peoples said the community has to do some soul-searching on race. He asked, who wrote history and left African-American history out?

Peoples said when Mercedes Benz was looking to locate a new plant, it considered Rowan County but ended up in Alabama.

Russell Smyre, a pastor, suggested that talks about race have to start at home with conversations around dinner tables, and that relationships among races can be built by starting in each others’ homes.

“The elephant in the room is that we have to get beyond our fear of each other,” Dr. William M. Jordan III of Monroe said.

Walden said “one of the reasons there is a lot of fear is, we don’t know each other.” Again, he said, that takes time, courage and intentionality.

Walden encouraged those in the Aymer Center to invite someone from a different race to their homes for dinner. Things have to happen person-to-person on a micro level, Walden said, or there will be some serious collisions on the macro level.

Alex Clark said he couldn’t help but note that Thursday’s crowd was mainly older people. “What does that say about us?” Clark asked, that the community can’t seem to get it together so their children will have a future.

If you want kids to pull up their sagging pants, Clark said, “pull their minds up.”

Bob Freeman, a retired pastor, said he can’t find anything in the Bible about skin color, making him wonder, “Did God make us different colors just to see how we would handle it?”

Clarence Shuford, a pastor, said when people teach true history, they acknowledge the bad and the good and, in doing so, it becomes more inclusive. “Part of the problem is we don’t know our true history,” Shuford said.

Wilson Cherry spoke of the need for individuals to invite people of different races to their churches, into their homes, to their civic clubs and into their businesses. He talked of the importance of utilizing the local colleges and reaching out to all people.

“Opportunity and exposure will change this community,” Cherry said.

Whitney Peckman, who is white, spoke of the need for white people to truly invest in their African-American neighbors and not pay lip service to it. She noted that 52 percent of Salisburians are now people of color.

As for Salisbury’s Confederate monument, the discussion of which was one of the things leading to the forum, David Post said it can be changed, just as the Statue of Liberty was changed long ago.

Dunkin said he was intrigued by a suggestion from Chris Shoaf, who proposed an annual award of love and compassion related to Fame’s wings. It could be given to a person going to great lengths to bring the community together, he said.

Harrison said statues and memorials are markers, but they have to be viewed as shared history. In 1909, for example, when Salisbury’s Confederate monument was erected, Harrison’s father was born.