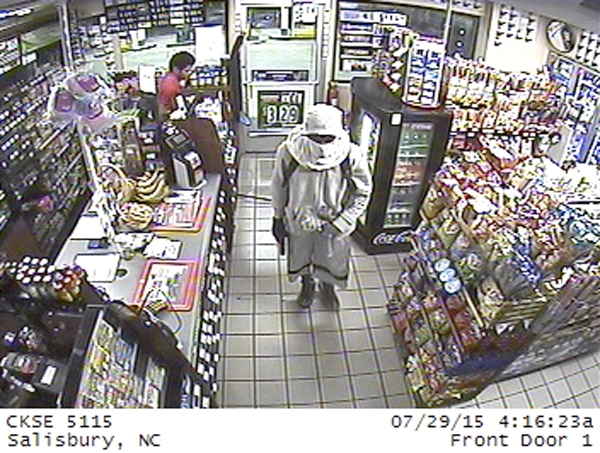 Submitted photo One of the suspects in the Circle K robbery was wearing a white T-shirt over his head. Submitted photo One of the men in the Circle K robbery was wearing a black T-shirt over his head.

SALISBURY — A pair of men, armed with a handgun, robbed the Circle K store at 1015 E. Innes St. near Interstate 85 early Wednesday morning.

Store security cameras caught images of the men, though each tried to hide his identity by wrapping a T-shirt around his head.

The robbery occurred at 4:17 a.m. Wednesday. The men came through a side door. One stayed by the door as the other man, brandishing a handgun, demanded money from the clerks. Money was taken from the cash register, but the store employees did not have access to the safe.

The employees were told to lie face down on the floor, and the men left in a silver Nissan Altima, taking a left against traffic on East Innes Street and turning onto Green Street. Police said the car was reported stolen Wednesday afternoon and recovered.

He pulled out his gun and then he said, “If you make a crooked move, you both fall dead. Crank... read more