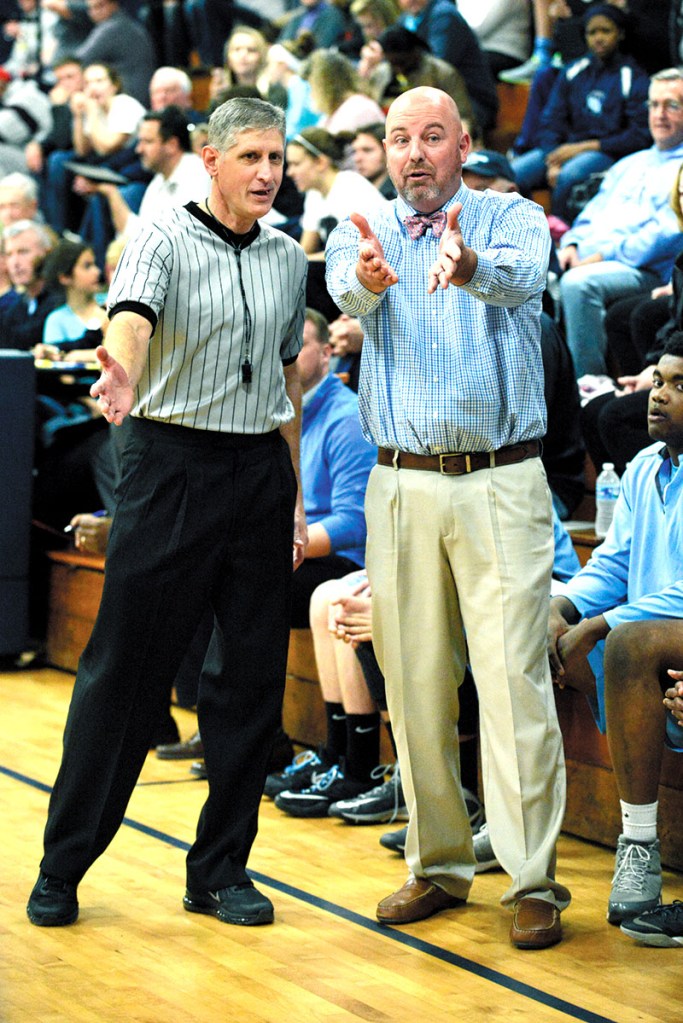 File photo by Wayne Hinshaw / for the Salisbury Post West Rowan’s Mike Gurley and the referee see it differently during a South Piedmont Conference game at East Rowan. Gurley will coach the North Carolina team in the Carolinas All-Star Basketball Classic.

MOUNT ULLA — West Rowan’s Mike Gurley will coach North Carolina’s boys in the 19th annual Carolinas All-Star Basketball Classic in Myrtle Beach next March.
“I’m excited,” Gurley said. “You look at the list of guys who have coached in the North-South and the East-West all-star games, and there are a lot of great men and coaching legends. My own high school coach (North Meck’s Leroy Holden) is on that list. I’m humbled and honored to be chosen.”
It’s unlikely anyone ever selected to guide an aggregation of all-stars has been better prepared for the assignment.
Gurley has coached at Nike All-America camps, and in 2004 he coached the all-star team representing the South in the National Sports Festival in Colorado Springs, Colorado.
He has a forceful personality and got talented players, including recent NBA Sixth Man of the Year Lou Williams, to play as a unit. Gurley’s South stars put up 158 points in one game.
“We got talented guys to unite and buy in to the team concept,” Gurley said. “It was important to guys like Williams, Tasmin Mitchell (LSU) and Richard Hendrix (Alabama) to represent their section of the country well.”
Gurley was the assistant to East Rutherford’s Brad “Bull” LeVine when the West team won 107-97 in the 2012 East-West Game at Greensboro Coliseum.
Gurley was recommended for his latest assignment by Davie coach Mike Absher, who served as the North-South coach in 2014.
Gurley’s career head coaching record at Lexington and West Rowan is 468-167, and he’s coached three state champions. He’s won a Rowan record 366 games during his 18 seasons in Mount Ulla.
Gurley will be assisted in Myrtle Beach by South Johnston’s David Dewey.
“I haven’t met him yet,” Gurley said. “All I know about him is he has the same number of (hair) follicles as me. It’s going to be a very clean-shaven staff.”
Coaches will nominate players they feel are worthy of inclusion on the 10-man N.C. all-star squad, and Gurley and Dewey will make the final decisions.
“We’ll be picking 10 very talented seniors,” Gurley said. “But you also want to get 10 guys who want to be part of a team, guys who will play defense, guys who want to represent North Carolina in the right way, and guys who will be happy to do the things that will be expected of them — like making hospital visits.”
Gurley is looking forward to his 19th season at West Rowan — he said rising sophomore Caleb Mauldin has been sensational in summer action — and the all-star game will be a unique experience to cap the season.
Gurley has attended the North-South contest before. He was in the audience when West Rowan’s K.J. Sherrill competed in the 2009 game.
“It’s always an exciting game because it’s played in a smaller arena than Greensboro, and it’s jam-packed,” Gurley said. “We’ll do all we can to try to win it.”