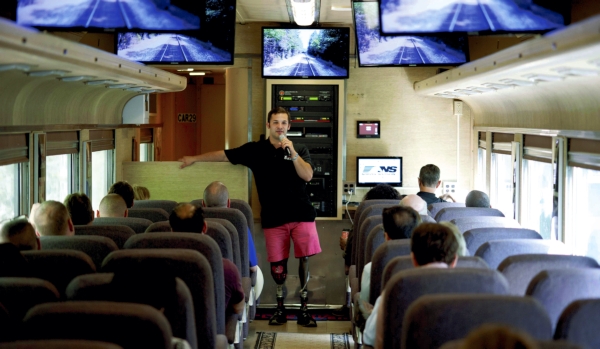 JON C. LAKEY / SALISBURY POST Mark Kalina Jr. has become an ambassador and national spokesman for Operation Lifesaver. In 2013, Kalina lost both of his legs in an incident with a train as he was taking a shortcut home through an Ohio rail yard.

“Please, kill me, please,” Kalina told a police officer as he laid on a set of railroad tracks.

His shirt had snagged on the side of a train. Without a moment for Kalina to think, the train began moving. He tried to climb up a ladder in an effort to prevent being dragged alongside.

Kalina unhooked his sleeve, but lost his balance and landed beneath the train on his stomach.

He chose a route alongside the tracks on an October 2012 night to save time on a walk home. It might have shaved off five minutes, he estimated. Instead, he was hospitalized for 17 days, and he now spends 10 minutes each day putting on prosthetic legs.

Kalina’s story is rare among those struck by a train. Most don’t survive.

He now shares his story with everyone who will listen. He spoke to a group Thursday on a Norfolk Southern train traveling from Salisbury to Hickory as part of the national Operation Lifesaver Program.

Norfolk Southern scheduled a tour of the Carolinas because of the states’ large number of train-related incidents and used Kalina as a living example of how trespassing on train property can alter a life forever.

In the previous several weeks alone, Rowan County has seen three train-related fatalities. For statistical purposes, accidents are broken into highway-rail, which could include a car crossing train tracks, and trespassing incidents.

Only one trespasser casualty occurred from the start of 2012 through April 2015, according to federal records. The records don’t include the three deaths this month.

To date in 2015, Rowan has seen four train-related fatalities. One is classified as a highway-rail incident.

North Carolina ranks seventh in the nation for trespassing-related incidents, according to federal statistics.

Kalina stressed that trespassing on railroad property is illegal. Norfolk Southern spokeswoman Susan Terpay said the law includes not only those walking adjacent to tracks, but also photographers taking pictures.

During Thursday’s event, Norfolk Southern staff and speakers stressed that it can take a train more than a mile to stop. They also mentioned the width of the train taking up more space than the space immediately above the tracks.

Stopping distances are shorter for lighter trains. Speed, however, makes it nearly impossible for trains to stop on a dime when cars or pedestrians get in the way, according to David Robinson, who works for the Department of Transportation’s Be Rail Safe program. Speed varies depending on the type of train and location of the track, Robinson said. The standard speed limit for a span of track running from Atlanta to Washington, for example, is 79 for Amtrak, 60 for intermodal and 50 for general freight.

“People think they can beat a train, but the speed a train is going can be an optical illusion,” Terpay said.

A number of local officials from Salisbury and Rowan County attended Thursday’s presentation by Norfolk Southern.