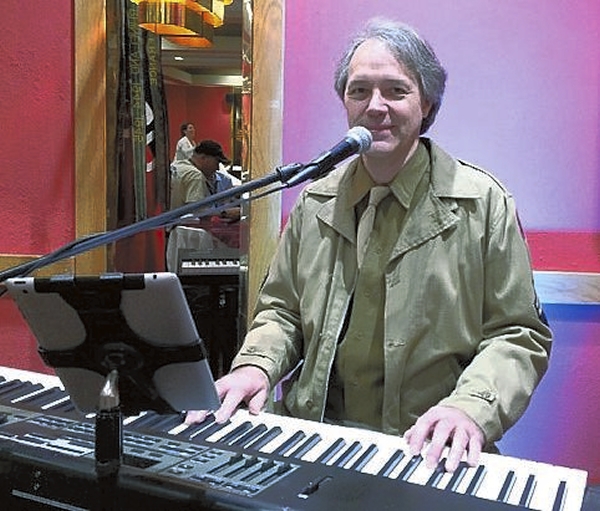 Outfitted in a World War II-vintage uniform, Hoffman performed songs and instrumentals that were popular from 1940-46. He said his requests included “Lili Marlene” and “Moonlight Serenade.”

“The gentleman who requested ‘Lili Marlene’ told me that a group of German soldiers they had captured often sang ‘Lili Marlene’ in captivity,” Hoffman said.

All the men from the division were between 89 and 93, “and it was amazing spending time with them,” Hoffman said.

“They have a sort of knowledge and quiet confidence that I imagine only comes from the life experiences they survived,” he added. “No egos, just lots of joy.”

According to the the group’s website, at the beginning of World War II, the 30th Infantry Division was made up of existing National Guard units from the states of North and South Carolina, Georgia and Tennessee.

Its nickname was “Old Hickory,” a reference to Andrew Jackson, the seventh president of the United States.

Arriving at Normandy just after D-Day, the 30th Infantry Division served in Europe with distinction and was described by Gen. Dwight Eisenhower’s chief historian, Col. S.L.A. Marshall, as the No. 1 infantry division in the European Theater.

According to the division history, the 30th served valiantly at St. Lo and Mortain in France. It was the first infantry division to enter Belgium and The Netherlands and also was instrumental in breaching the Siegfried Line in October 1944.

The 30th Infantry Division played a role in the capture of Aachen, Germany, the first sizable German city to be taken by the Allies in World War II.

Later, the 30th made a rapid advance around the north side of the Ruhr Industrial Pocket, leading to its capture of Brunswick and Magdeburg.