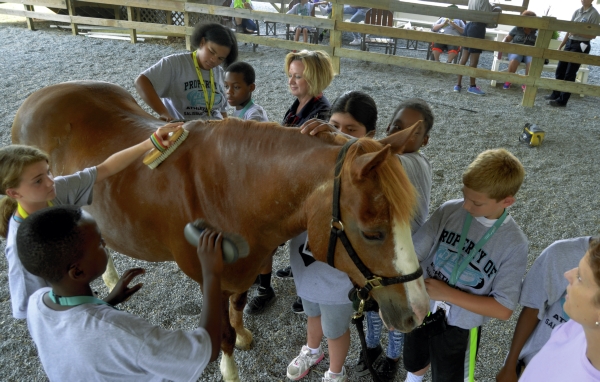 Young hands eagerly reach into a bucket, each one grabs a brush and rushes over to choose a spot to gingerly brush Robin, a 24-year-old Connemara horse at Saving Grace Farm.

Those young hands belong to a group of rising 6th grade Knox Middle School students who, for this week, are attending the Salisbury Police Department’s Youth Crime Prevention Camp. About 21 children take part in the week of activities that will also include a trip to Raleigh for students, school resource officers, other police volunteers and cadets where they’ll tour museums and visit the state capitol building.

This week, students have also toured Livingstone and Catawba colleges and gone on a scavenger hunt for the downtown sculptures.

This is the first year for the camp, which grew out of a desire that Salisbury Police Officer Ann Cooper had to expand her Gang Resistance Education and Training (G.R.E.A.T.) program. Cooper, who is the police department’s Youth Crime Prevention Officer, teaches the 13-week program to students during the school year.

The students are divided into groups of five to six and are chaperoned by either a police cadet, school resource officer or other police officers.

The summer camp teaches the students about leadership, respect and a little budgeting. Cooper said each child starts the week with $203 in “spending money.” The students are tasked with budgeting their money for the week by paying for activities. If students are rude to one another or misbehave they are “charged” a fine. The students can then earn their money back for showing kindness to others or in good deeds.

Cooper said the budgeting is one way to show the students that things in life cost money and about being kind to others.

Saving Grace Farm, a local facility that offers therapeutic riding lessons and other programs, hosted the program. The facility is located at 565 Trexler Loop.

“We are excited to have their program,” said Janna Burns Griggs, executive director of Saving Grace Farm.

Steven Lescoe, 11, is one of the campers this week who had an opportunity to not only tour area and state facilities but got to meet some of the men and women who will teach him this year at Knox.

As to what activity Steven said he liked the best, “all of them.”

Rosie Zaragoza, also 11, spoke about a video the students have been watching “Lord of the Flies,” a 1990 film based on a book by William Golding about a group of boys stuck on an uninhabited island who then must live by rules set by the other boys on the island.

Cooper said it’s a way to teach the children about leadership, being followers, peer pressure and other societal issues children may face. The children are also learning about rules and the consequences if they are not followed.

Rosie said she enjoyed learning to make a connection to the horse, Robin, while at Saving Grace Farm.

Police Cadets Calissa Andersen, 17, and Ashwoa Deberry, 14, assisted during this week of camp.

Deberry said the most important thing is to make sure students are being respectful of each other and are having fun. Deberry has been a cadet for nearly three years and initially wanted to go into medicine, but is considering a career change to law enforcement.

The camp began last week with about 20 students. The camp will end Friday with a barbecue with parents and other family.