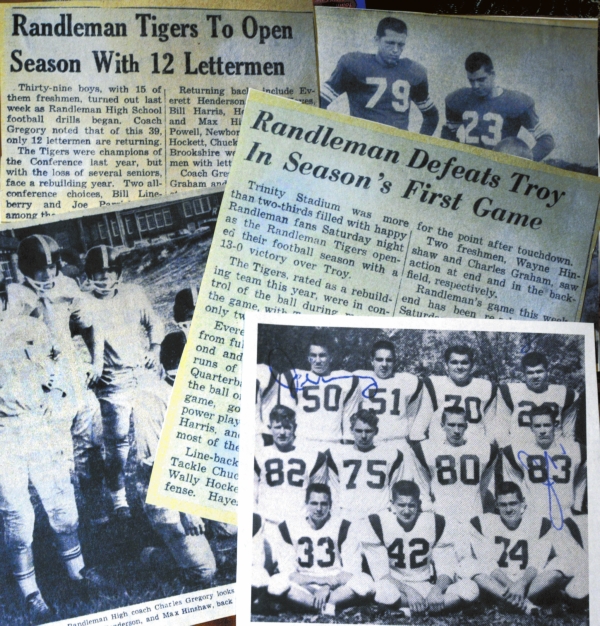 The Randleman Tigers opened their 1960 football season beating Troy after two weeks of practice and the team physicals. Wayne Hinshaw is in the lower right team photo wearing No. 80. Wayne Hinshaw/For the Salisbury Post

Wayne Hinshaw: When football physicals were a team effort

Well, it is that time of the year again, when athletes and sports fans start thinking about football. After the July 4 break, my mind always clicks ahead to the fall football season. I know we’ve had lots of Rowan American Legion baseball this week, with the state tournament at Newman Park, but somewhere in our ears we can hear the thud of kicking that pigskin.

In today’s high school athletic world schedule, I’m not sure that football practice ever really goes away. When a season ends in November, coaches start talking about the hard work required in the offseason — “offseason” meaning the time of the year when you don’t have Friday night games each week. Players practice in the spring and continue all summer either on the field or in the weight rooms. Maybe there is no offseason any longer.

If you are expecting a column on modern-day high school football, read no more. I’m talking about the days of the Rockwell Rockets, Granite Quarry Quarriers, J.C. Price Red Devils, Spencer Railroaders, Landis Yellowjackets, China Grove Red Devils, and Salisbury Yellowjackets. I can’t list all the former high schools, since I don’t know if Cleveland and Woodleaf high schools had football teams. I can’t remember the mascot for the Dunbar High team.

The Randleman team that I was a part of gathered in the old “Tin Can” gym in the heat of early August for our first team meeting of the season. It was the day for physicals at the start of practice. Coach Charlie Gregory preached the rules and read regulations that we were to observe for the season starting on this day.

The sizes of the jars were 8 ounce, 10 ounce, 16 ounce and the one-quart Ball canning jar.

Coach said, “Boys, get you a jar and put a sample of your urine in it for your physical.” The rush was on. All 35 of us were laughing and picking on each other about what kind of jar were we getting. I cannot remember for sure, but I suspect that I got a medium, 8 ounce-size mustard jar for my deposit.

On every team there is a team clown. Our own special team clown was nicknamed Strawberry because of his blondish red hair, barbered in a waxed, straight-up flattop haircut. If anything was to be crazy, it came from Strawberry every time.

Guess which jar Strawberry picked for his specimen?

He grabbed the only quart-sized glass Ball canning jar.

Standing there in the privacy of 35 fellow football players, in the center of the gym floor, we proceeded to do our business in our jars. Our old gym didn’t have a bathroom. There was a lot of laughing and joking and punching each other trying to make someone miss their jar. There has to be some sort of divine reverence at such an occasion for a football team. I don’t mean a religious, church-related reverence, but such a ceremony of common humiliation has to be significant.

With each boy giving his best effort in filling his jar, most came up short.

Back to Strawberry with the quart-size Ball canning jar. His contribution looked mighty slim in that big 32-ounce jar. But he didn’t want to be shown up, so he got all the boys to share a sample from their jars to his. It worked wonderfully well for him. He nearly filled that quart Ball canning jar to the brim.

We were off to Dr. Burnett’s office. The gym was about three blocks away from the office. Off we went down the street to Main Street in Randleman, carrying our jars of specimen. The office was on the second floor. This was before there was any concern about handicapped folks getting up the steps to the doctor’s office.

When we reached the office, we each turned our jar over to the nurse. When Strawberry handed the nurse his quart Ball canning jar, she looked at him and asked if this was all his.

Standing in front of her with red hair, red face and a goofy expression with his tongue brushing over his lips from side to side like a car windshield wiper, he answered, “It was the best I could do.”

She took his quart Ball jar and walked away, saying nothing else.

Thinking back about that day, if that nurse had run her test on Strawberry’s quart Ball canning jar sample, she could have cleared the entire team in one test, since it was a team effort in that one jar.

Maybe this is what the saying, “to have a united team effort” really means.