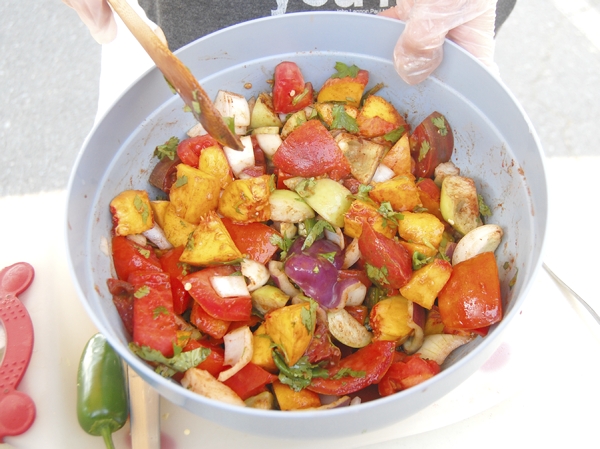 Deirdre Parker Smith/Salisbury Post Tommy Thomason's salsa, before it was broken down in a blender, looks like a great summer salad, with peaches, tomatillos, peppers, tomatoes, onions and more.

Just two people signed up for the Salsa Showdown at the Salisbury Rowan Farmers Market, but those two showed exactly how versatile salsa can be.

Jordan Shipton, a student at N.C. State University who is an intern with Rowan County’s Cooperative Extension Service, went a fairly traditional route with her corn and tomato salsa. Chunks of corn, bell peppers and tomatoes created a salsa that was easy to scoop up on a chip.

Jordan also added a good dose of jalepeno, which gave the cool concoction a definite kick.

Those who were not fans of heat remarked on the delayed burn. Others wanted more. It was a pretty well balanced combination that would be perfect for sitting and snacking.

Tommy Thomason, on the other hand, went for smooth, whirring his veggies in a blender for a silky texture with loads of flavor. His version would be ideal as a sauce for fish, chicken, burgers, even hot dogs. It was also good on chips, so good that the daughter of one of the judges could not stop eating it.

Danelle Cutting and Toi Degree, both agents with Cooperative Extension, ran the contest as a way to showcase the fresh fruits and vegetables at the market. Even with the drought, tomatoes, corn, bell peppers, hot peppers and onions are available, especially tomatoes. Among the vendors you’ll find everything from green to purple tomatoes, with all sorts of variations.

Cherry and grape tomatoes were also in abundance.

For the contest, both Jordan and Tommy were given tomatoes, limes and cilantro. They could use spices brought from home and add whatever they wanted, as long as it came from the market.

Tommy, who has a couple years on Jordan, knows what he likes and knows how flavors go together.

He and his assistant, Sandy Whitley, chopped up tomatoes, tomatillos, onions, peaches, jalepeno and cilantro. He also added bell pepper, a sprinkling of cayenne pepper and a good dose of cinnamon.

He had made a test batch the night before, and it had mellowed into a sweet and spicy mix. At home, he usually makes about a cup and a half at a time, just enough to eat.

“You know how you tell of a jalepeno is hot?” he asked. “These here, these striations on the outside. And redder is hotter than green.”

If his tomatoes are a little too juicy, he squeezes some of the liquid out with his hands. “You don’t want this to be watery,” he advised.

He put it in a blender in small batches and only pulsed it a few times to leave it thick, but fairly smooth.

Jordan carefully chopped her tomatoes as if they were onions, cutting first one way and then across, so that some of the juice was left on the cutting board. She used four ears of corn, a half of a large bell pepper and three tomatoes, a Carolina gold, a tiger stripe and a regular red.

“I love to cook and bake,” she said. She’s an agriculture education major who likes animals and horticulture, baking, is very interested in health and loves horses and everything to do with them. This summer, she has worked with Cutting, and has helped make palette gardens at Rowan Helping Ministries, helped with the farm to fork dinner, helped children create seed art and spent a lot of time in fields.

She said she and her mother make a salsa that includes black beans with the corn and tomatoes and used that as the base for her recipe.

When it came time for judging, Cutting and Degree walked around the market looking for help. They enlisted Eric Bowen, the Farmers Market manager, Donna Rowland of Funky Pepper, maker of sauces, salsas, relishes, pickles and jelly, and market shopper Stephanie Anderson, who was with her three young children.

Rowland carefully scooped up a sample on a chip. “This has very distinct flavors,” she said, “and maybe a little more heat.” Then she took a scoop of the other, “Oh, this is more what I expect in a salsa. They’re both delicious. I could eat both all day.”

Bowen’s first reaction: ‘What is that flavor? Is that chocolate? Cinnamon!?” He tasted the second salsa. “I like roasted corn better in this, but it’s good.”

Anderson, whose young daughter could net get enough of Tommy’s salsa, said she and her husband dream of owning a food truck one day. They used to cater in Tennessee.

The judges were asked to score color, spice, heat, freshness, creativity, flavor and overall appearance. It was tough. Jordan’s salsa was bright and fresh, with the punch of pepper at the end of the bite. Tommy’s was an exotic red-orange color with unusual ingredients.

Jordan came in second with 83 points and Tommy was the winner with 89 points. Both contestants were happy and humble. One woman was searching the market for a container she could use to take some of Tommy’s salsa home. He’d made a double batch.

“I like to cook,” he said. “Maybe I’ll think about jarring this stuff.”

Anderson’s daughter used her finger to get the last of a sample out of her small cup and asked for more.

Neither contestant measured much of anything, but offered proportions for a rough recipe.

All the ingredients were raw. Deirdre Parker Smith/Salisbury Post Tommy Thomason’s winning salsa was broken down in a blender for serving and included peaches and cinnamon with tomatoes and other ingredients.

A dash of cayenne pepper

Tommy eyeballs most of his recipe. He suggests juicing the tomato to avoid a watery salsa. He peeled the peach and tomato and took the rough husk off the tomatillo. He says the rule of thumb for the onion and pepper is to use about one-quarter the amount of tomato and peach, so if you have more tomato and peach, use more onion and bell pepper. He sprinkles with cayenne pepper, lime juice and then the cinnamon. On competition day, he used more like 2 teaspoons per batch. The cayenne is to taste and the jalepeno goes in seeds and all. The cilantro was roughly chopped and added just before blending. He blends in small batches, and just pulses until the ingredients break down. Do not puree. Refrigerate if any is left over.

Cut the corn from the cob into a large bowl. Chop tomatoes into a small dice, as well as the pepper. Cut green onions and add to mix, along with with diced jalepeno. Add the juice of a lime and seasonings and stir well to combine.

This salsa recipe was not part of the competition, but is a tasty green salsa using the tomatillos available now. It is adapted from Rick Bayless’ recipe.

1 or 2 hot peppers, jalepeno or serrano

Roast the tomatillos, hot peppers and garlic on a baking sheet 4 inches below a broiler, until they appear blotchy and blackened. Turn and roast the other side, about 10 minutes total. While roasting, chop the onion and soak in cold water.

Cool the roasted vegetables and transfer to a blender, including any juice that has accumulated on the pan. Add the cilantro and 1/4 cup water, then blend to a coarse puree. Add lime juice, if using. Place in serving dish, drain onions and stir into salsa. Season with salt to taste and serve. This is unusually good with pan-seared fish of any kind, as well as shrimp. Soaking the onion in cold water takes out some of the bite. You may omit this step, if desired. The lime juice accents the tanginess of the tomatillos.