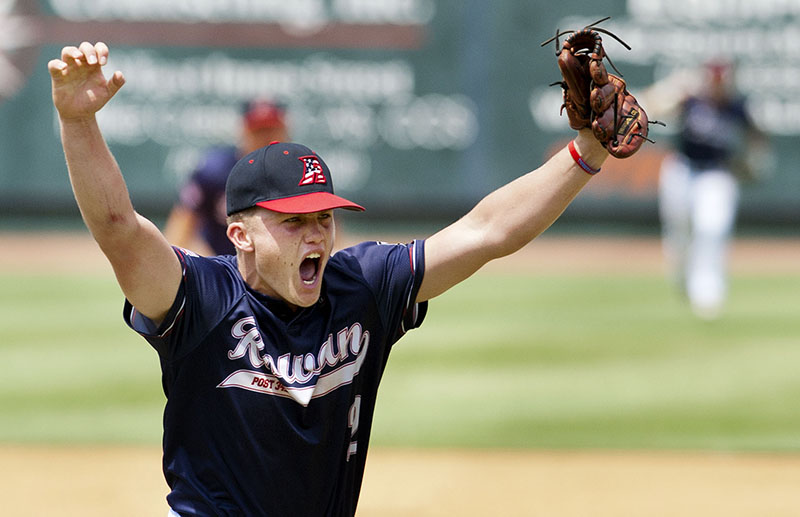 SALISBURY — Riley Myers was hot and tired Tuesday. The sun was beating down on the players at Newman Park, and the heat was on in the championship game of the American Legion State Baseball Tournament.

Myers had already worked eight quick innings. But a leadoff home run in the top of the ninth by High Point right fielder Jake Moebius cut Rowan County’s lead to 4-3. Rowan County head coach Jim Gantt walked to the mound to tell Myers that Heath Mitchem was ready to go from the bullpen.

“I was like, ‘I got it,’ and he turned around and walked away,” Myers said. “After that, I just kind of turned it on and knew what was at stake.”

Gantt left Myers in the game. Corey and Kip Brandenburg went down on called third strikes for the first two outs of the inning. Myers finished what he started with a strikeout of shortstop Luke Gesell to hand Rowan County its first state championship since 2009.

“You could see it in his eyes,” Gantt said. “It wasn’t like he was trying to convince me with smoke and mirrors. He was kind of upset that I would even come out there to take him out.

“It’s an easy decision. I go back to the dugout. …He strikes out the side. Who does that? I mean, you got have some (guts) to do that.”

Myers pitched nine strong innings with nine strikeouts and no walks. High Point got him for three runs on nine hits.

Despite pitching a complete game in about two hours, the tournament MVP was worn out.

“All I had was out there, I guess, because I ain’t got nothing right now,”  Myers said minutes after the game. “I’m going to go home and nap for a little bit, I guess.”

Second-place High Point, making its fourth appearance at the state tournament in the last five years, went 0-4 against Rowan County in 2015.

It was the eighth American Legion state title for Rowan County in the last seven decades. The team has won three — 2002, 2009, 2015 — since the turn of the millennium.

Rowan County (30-6) advances to the American Legion Southeast Region tournament in Asheboro. Its first game is at 4:30 p.m. Aug. 5 against the state champion from West Virginia. Randolph County, which finished fourth in the Area III tournament, has an automatic bid into the regional tournament as the host. There will also be teams from Alabama, Florida, Georgia, South Carolina and Tennessee.

“Obviously we feel like we can win it and be as good as anybody there,” Gantt said. “All year, we hadn’t worried about anything. We lost a game to Eastern Randolph, we had the winning streak, nobody talked about it. Nobody cared.

“If you don’t win your last game, your season’s over. And you’d like to be in that position where winning the last game means something. I think we got to be one of the favorites going in. You got to be in it to win it.”

Garcia was 2-for-4 with two runs scored. Mitchem had a team-high three hits, all singles, and an RBI. Harrison Baucom also supplied a pair of hits and an RBI.

Rowan County’s bats did what they needed to do in the bottom of the eighth. Garcia stood on second base with one out and the score tied at 2. Mitchem bounced a single up the middle, and Garcia slid under High Point catcher Ryan Caveness for a 3-2 lead. Kacey Otto found himself in scoring position after a single and a missed tag at second led to Mitchem being caught in a rundown between second and third.

At first, it appeared Otto was tagged out at second before the rundown. The umpire at second called him safe.

“How Mitchem with his speed stayed in the rundown that long to get Otto to second, that’s huge because he’s in scoring position with more speed,” Gantt said. “That was big.”

Hunter Shepherd provided the insurance run Rowan County sought with a single to right field, his only hit of the day, that brought Otto around to score for a two-run cushion going into the ninth.

“I was just trying to get the bat on the ball,” Shepherd said. “I struggled a little bit to start the game, and I just wanted solid contact and a little single. It worked out.”

It was enough to put Rowan County in position to win a state championship and to get a few more afternoons and evenings in the sun.

“Just talking about this team gives me chills,” Myers said. “It’s the most fun I’ve had. I’ve played Legion for three years, and I’ve had so much fun the whole time. This team, the way we have the will to win and everybody is for everybody and we hang around with everybody, we love playing the game, and that’s what turns into stuff like this.”