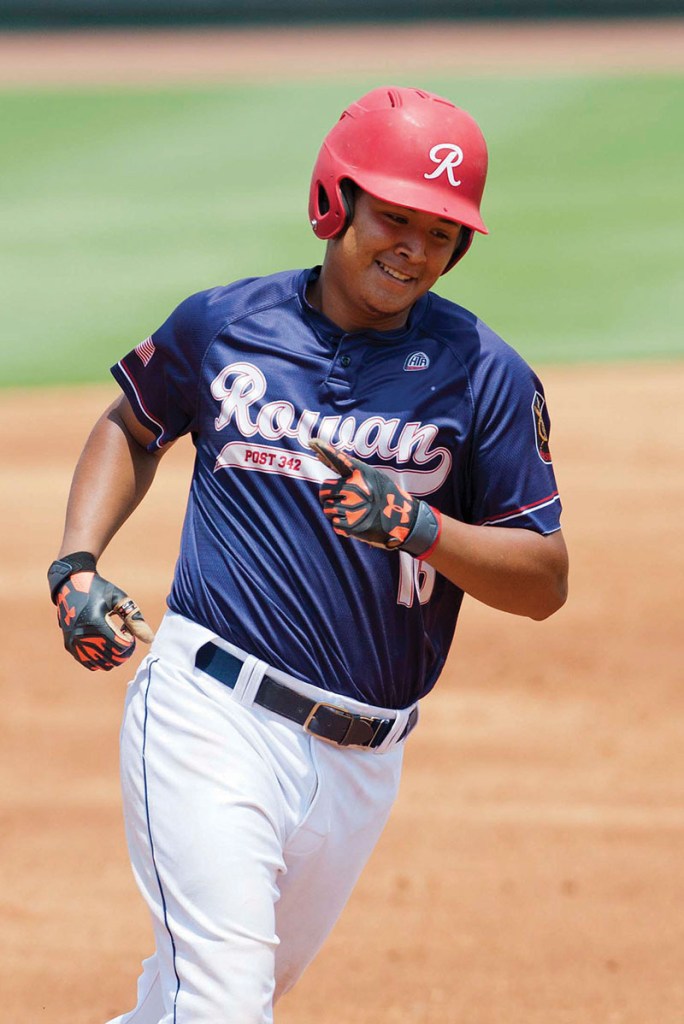 SALISBURY — Juan Garcia and Omar Bautista have been teammates for more than a decade, so Bautista is familiar with the sharp sound Garcia’s bat makes when he squares one up.
“I was sitting in the dugout in the fourth inning and I heard the crack of Juan’s bat,” Bautista said. “Then I ran up to the fence to watch. At first I wasn’t sure it was gone, but then I saw Juan rounding first, the ball is still going, and I told myself, ‘Well, he’s done it again.'”
Hundreds of Rowan fans, baking in the sun with a 1 p.m. start, helped will Garcia’s drive over the towering wall in left-center.
Garcia laughed and said he didn’t really need the assistance.
“For me, that one was a no-doubter,” Garcia said. “He’d thrown me some changeups, but I was sitting on a fastball and I got a fastball and hit it just right. I hit it on the sweet spot and when you hit one there you don’t feel anything at all. There’s no vibration at all.”
Garcia’s fourth homer of the season came against tough lefty Bryce Lance and led off the fourth. The blast broke a 1-all deadlock in Rowan County’s struggle with High Point and helped propel the program to its eighth American Legion state championship.
An agile, strong-armed defender at third base, Garcia had a fine offensive tournament (7-for-21, three doubles, four RBIs), and he’s had a terrific season. His 16 doubles rank in the program’s top-10 all-time for a season and his .426 batting average, if he can maintain it in the Southeast Regional, would be one of best 15 marks of all-time. He has 60 hits, 43 runs scored and a team-high 44 RBIs.
Rowan would’ve had a good team this summer even if Garcia and Bautista had played elsewhere, but there’s no question the newcomers have been instrumental in a good team becoming a 30-6 state champ.
Last summer, Garcia and Bautista played for the South Charlotte Panthers, an elite showcase team, but West Rowan coach Seth Graham is part of Jim Gantt’s Rowan County coaching staff, and Graham put in extra time talking up Legion ball to Garcia and Bautista.
In the high school season, Garcia paced the county with four homers on his way to all-county and all-conference honors. Bautista went 9-1 and was the Rowan County Pitcher of the Year and the South Piedmont Conference Pitcher of the Year.
“Omar and I made a decision during the high school season that we wanted to play Legion ball if things worked out,” Garcia said. “I was able to play for Rowan County where I lived, but Omar needed to get a waiver from Mocksville. He was able to get it and were excited about playing together.”
Bautista and Garcia fit in perfectly.
“We add Garcia, he’s our 3-hole hitter immediately, and that says everything,” Gantt said. “If Garcia makes an out, he gets upset, but he doesn’t sulk. He’s looking to take it out on the baseball or to make a play with his glove. He does things the right way. He loves to play, he plays defense and he always plays hard. That’s why he became a crowd favorite here from the start.”
Garcia had heard a lot about Legion ball from West Rowan teammates such as right fielder Harrison Baucom and shortstop Jeremy Simpson, veterans of the Rowan County team.
“Playing in front of huge crowds makes it really different,” Garcia said. “I heard there was a lot of support if you did well, but if you didn’t do well, there could be a lot of pressure.”
For Garcia and Bautista (4-1), it’s been an entire summer of doing well. Support has been significantly greater than pressure.
“It’s been a great experience for both of us,” Bautista said. “We’d heard a lot, but hearing about it and then actually playing the games are completely different things.”
When Rowan County broke a tense 2-all tie in the eighth inning on Tuesday, Garcia triggered the rally. He singled, moved to second on Dustin Ritchie’s bunt and used his surprising speed to gallop home when Heath Mitchem stroked a hit up the middle.
“I knew it was going to be a close play,” Garcia said. “I slid between the catcher’s legs to get to the plate and knocked him over. He stepped on my hand when I got up, but that’s all part of the game.”
Garcia’s 2-for-4 championship game came against excellent pitching.
“High Point pitched two legit guys,” Gantt said. “Not all of our guys had a good day, but Juan usually can handle the good pitchers.”
None of his teammates were surprised.
“Juan came through for us time after time at West,” Baucom said. “In a big game today, he came through again.”