Legion tournament: Rowan one win away from title 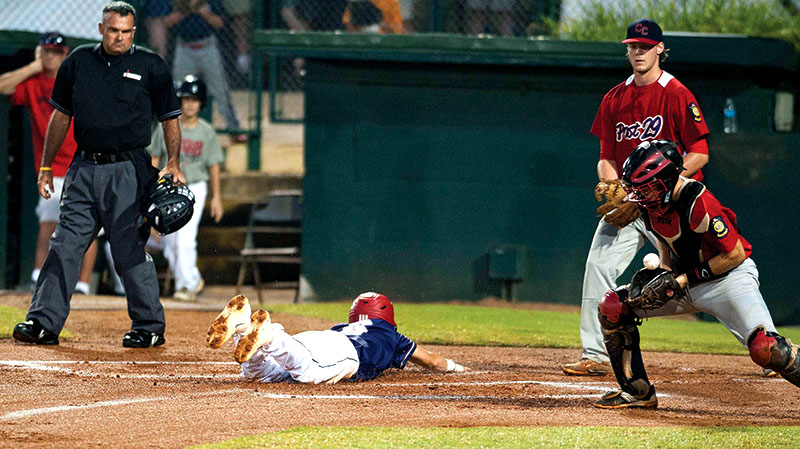 SALISBURY — It was the bottom of the sixth inning, and Rowan County was hanging on to a 4-3 lead over Caldwell County in Monday night’s semifinal of the American Legion state tournament. Sawyer Strickland had just replaced starting pitcher Tyler Scruggs with a pair of runners on and no outs on the board.

Caldwell County’s Aaron Moore floated a soft line drive to shallow center field. Rowan County center fielder Kacey Otto charged in to make a shoestring catch, and then he fired the ball to Michael Caldwell at second base to double up Mason Biddix to completely change the inning and effectively end the threat.

“I was running in trying to decide whether to dive or not,” Otto said. “I decided not to, and the runner took off, which kind of surprised me. I just threw it to Caldwell, who was standing there waiting for it. Caldwell was calling for it the whole time.”

The play put the momentum back in the favor of Rowan County, and the host team went on to a 6-3 victory over Post 29.

“That was huge. It completely changed (the game),” head coach Jim Gantt said. “They had been bunting every time they got men on base and no outs, and with first and second there, we thought for sure they were bunting, and they didn’t. Then Otto makes a shoe string catch.

“…The double play was nice. It changed the whole game.”

Strickland held Caldwell County scoreless the rest of the way. He gave up only two hits and a walk in four innings of relief. Scruggs did his job to earn the decision after going five innings on the mound.

“Scruggs did a great job, and Strickland, once he got to a certain pitch count, we said he’s going to be done for (Tuesday) anyway. So we just let him finish,” Gantt said.

Rowan County, seeking its first American Legion state championship since 2009, is now in control of its own destiny. The only obstacle between Rowan County (29-6) and its first state title in six years is High Point’s HiToms, the Area III runners-up.

The two teams, who met in the final of the Area III tournament, play at 1 p.m. today at Newman Park. If High Point wins that game, they will take the field again at 7 p.m.

“We all feel confident, but we all know we can be beaten,” Otto said. “We aren’t indestructible against a really good team that we’ve played before.”

Rowan County never trailed Monday night against Caldwell County. Riley Myers and Heath Mitchem provided a pair of sacrifice flies in the first inning to plate a pair of runs and a 2-0 lead. In the third inning, Juan Garcia scored from third on a wild pitch, and Dustin Ritchie’s RBI-single pushed the lead to 4-0.

Myers and Ritchie were Rowan’s leading hitters with two hits each. Six other players had one hit.

Post 29 put the heat on Rowan in the bottom of the fifth inning. Down 4-1, Trent Wakefield blasted a two-run double to cut the deficit down to 4-3.

In the top of the sixth, Rowan County had the bases loaded and threatened to break open the game. Purus got Juan Garcia to ground to shortstop to start an inning-ending double play and give Caldwell County a chance to steal a victory.

Otto’s catch in shallow center in the bottom of the inning and quick throw to second for the force out on Biddix, who had a game-high three hits, gave Rowan the boost it needed to get within one win of a championship.