Diehard fans bask in glory of baseball at Newman Park 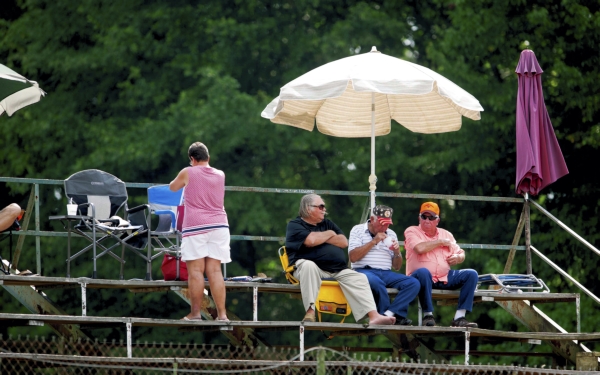 Since Friday, when the N.C. American Legion Baseball Tournament started, diehard fans at Newman Park have lined up along the top reaches of the bleachers on both baselines to bask in the glory of the game and find comfort in the shade of umbrellas.

They brought beach, porch, patio, chair and rain umbrellas. And similar to camping out in Krzyzewskiville, they leave their chairs, cushions and umbrellas in place whenever they have to make runs to the concession stand or bathrooms. They often do the same if they go home or back to work between games.

One of the presiding officers of Umbrella City, sitting in the far top corner along the third baseline, is Jake Cauble, who figures he has been attending ballgames — and playing in some of them — at Newman Park for 65 years.

As with many of the other Legion baseball fans, Cauble bought a tournament pass so he could see every game, whether home crowd favorite Rowan County was playing or not.

Counting that game, Cauble has watched a total of 13 games since Friday.

“It’s been a good tournament so far,” he said.

The state tournament is filled with homespun pageantry. There have been many ceremonial first pitches to start games, bringing back coaches and players from the past. The Rowan County Veterans Honor Guard has gallantly presented the colors, and numerous local singing stars have taken the microphone.

Martha Corriher sang both “The Star-Spangled Banner” and “God Bless America” (the seventh-inning stretch song) Friday and Saturday nights and also had a singing appearance Sunday and another one Monday.

“I love it,” she said. “Anything I can do for the American Legion and the auxiliary.”

As Corriher stood behind home plate and led the Monday afternoon crowd in “God Bless America,” four of her grandchildren lined up alongside: Brinley, 8; Cressley, 5, Wrigley (as in Wrigley Field), 4; and Jett, 2.

Newman Park has been a fun place to be these last several days. The sizable and enthusiastic crowds on three consecutive nights led to half-and-half jackpot drawings in which the winners took home $500 Friday and Saturday and $600 Sunday.

Those nights understandably have coincided with Rowan County games.

Harry Agner said his volunteer crews sold 1,000 hot dogs Friday night alone and 800 to 900 the other nights. To show his appreciation, Agner treats his volunteers to food other than what they’re selling at the concession stand. Sunday it was pizza; Monday afternoon, Dairy Queen Blizzards.

“I look at so many hot dogs that I don’t want to eat a hot dog,” Agner explained.

Agner reported that Cheerwine outsells any other soft drink at the ballpark by a 10-to-1 margin. Yes, it’s a home crowd.

The night games of the state tournament are so busy that Agner rotates in a new concession crew of five or six people at least three times. His volunteers, most of which have an American Legion or Legion auxiliary connection, are among the best.

“They know what they are doing, and they’ve been very cooperative,” Agner said.

Another fan who has tried to take in the whole tournament is Adam Smith. He follows a game-day ritual, if you will, of wearing a different baseball cap to each contest.

Sporting a yellow “peace frog” ball cap Monday afternoon, Smith claimed he makes his hat choices purely for fashion reasons and what looks good with the rest of his clothes.

“It ain’t got nothing to do with superstition,” he said.

On the first tournament day, he wore a ball cap he bought at the American Legion World Series in Shelby. On the second day, he donned his Appalachian State hat, because his daughter attends school at ASU. On Sunday night, his fashion choice was a Miami Marlins cap he picked up at a Greensboro Grasshoppers game.

“This one — I just like yellow,” he said of Monday’s choice.

Kay and Phil Simmons had a season pass to Rowan County Legion games and then bought a state tournament pass.

Sitting under her chair umbrella, Kay has seen every tournament game, no matter the opponents. Since she and her husband retired, they have taken in as much baseball as possible.

Kay said it’s hard to beat a day or night at Newman Park for entertainment. Besides the good baseball — this tournament has featured lots of hitting, scoring and stellar plays in the field — the admission price is reasonable. When you add in $2 Pinky dogs and soft drinks, slushies or snow cones, you have nirvana.

“It’s been a little hot, that’s the only thing,” Kay said. Before the night contest, she planned to leave her chairs in place, run into town, take care of a few errands and maybe find a spot with air-conditioning.

Between games Sunday, she and Phil went out to their car, ran the air-conditioning and took advantage of drinks they had packed in a cooler.

Back in Jake Cauble’s corner of Umbrella City, Jake was remembering when his son Wayne had the highest average on the 1971 Legion team and son Chris’ team won the 1984 state championship and played the regional in Deland, Fla.

Jake Cauble played Stan Musial League baseball and some semi-pro competition in the Yadkin Valley League, but he didn’t play high school ball. His dad had a farm, and he expected Jake to work with him instead.

Jake said he had his “tail beat” one day when he stayed with friends and played baseball.

Jake Cauble is such a devoted fan of the team, he has been allowed to ride the team bus to away games. Friends at Newman Park know how to find him. They look for his distinctive red-white-and-blue ball cap with stars.

And during the tournament, they also can look for Jake’s umbrella.