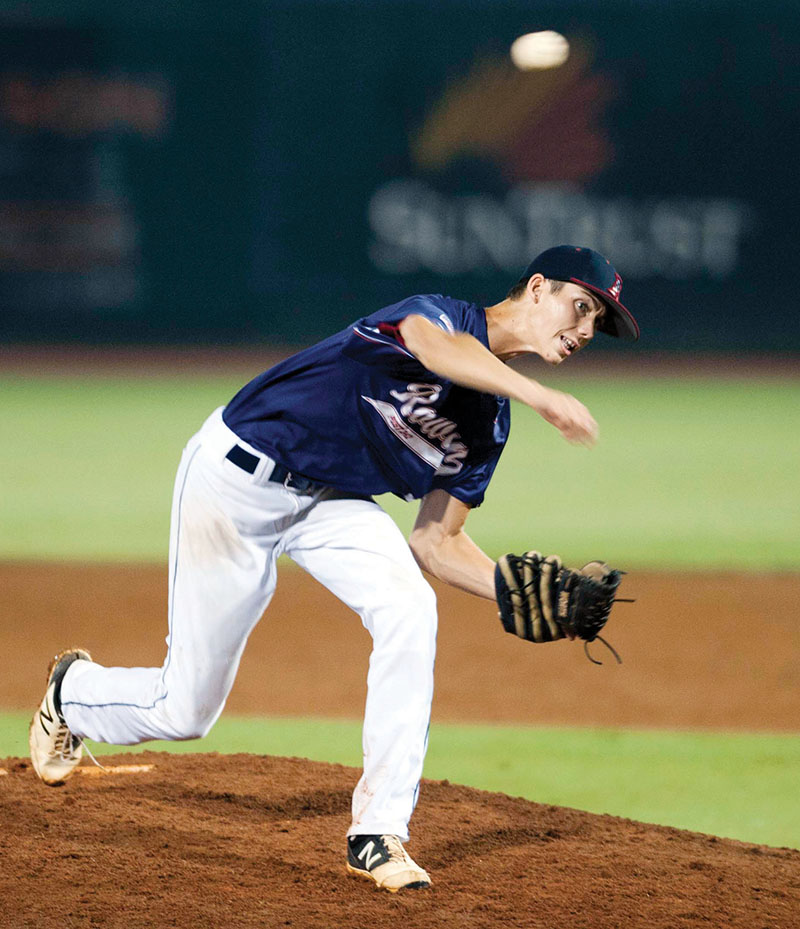 SALISBURY — Rowan County fans had just about forgotten homeschooled pitcher Sawyer Strickland was on the 18-man roster when he suddenly appeared to save a 6-3 win against Mooresville in the final game of the regular season.
Fans were checking their programs to see who No. 11, a tall, lean right-hander, was.
“I had bursitis in my shoulder,” Strickland explained. “It kept me out four or five weeks.”
Strickland will be remembered for a long time now. He earned his second save in Monday’s state tournament victory at Newman Park against Caldwell County. Once again, the final score was 6-3. although the pressure involved in this save was immensely greater. Strickland held a strong Caldwell County offense scoreless the last four innings to keep Rowan County (29-6) unbeaten in the double-elimination tournament.
Strickland pitched in the Homeschool World Series for the Greater Cabarrus Homeschool Stallions, but he’d never thrown a baseball in front of a crowd approaching the size of the one gathered at Newman Park on a rainy Monday.
“This was the biggest game I’ve pitched in my life,” Strickland said.
The Homeschool Stallions also produced Rowan County first baseman/pitcher Hunter Shepherd and pitcher Noah Jarrett. Strickland won nine games for the Stallions this spring.
“Hunter told me what a great experience he had playing for Rowan County last summer,” Strickland said. “It’s been a great experience for me as well.”
Strickland lives in rural Rowan and would go to West Rowan High if he weren’t homeschooled.
Rowan worked out mutually beneficial releases with Southern Rowan prior to this season in order to add Strickland, and that “trade” paid big dividends Monday.
Tyler Scruggs started, pitched five solid innings and earned the win against Caldwell County. When Scruggs ran into two-on, no-out trouble in the sixth, Strickland answered the call to the bullpen.
The first batter Strickland faced hit a line drive that was caught by charging center fielder Kacey Otto, and Otto turned it into a huge double play.
“That play Kacey made really helped,” Strickland said. “That play might’ve turned the tide.”
Rowan coach Jim Gantt praised the work of both Scruggs and Strickland.
“Strickland showed tonight what kind of potential he has,” Gantt said. “We probably could’ve brought him back from the bursitis earlier than we did, but we wanted to be careful with him. We think he can be good for us. Even when we made errors behind him, he kept his cool and just kept throwing strikes. His fastball has a lot of late movement on it. They just never really squared balls up on him.”
Scruggs offered praise for Strickland as well. Scruggs and Strickland combined for only one strikeout — but also for only one walk.
“Sawyer was throwing strikes, and I had a lot of confidence he could finish the win for us,” said Scruggs, who bumped his record to 3-1.
Strickland cruised through a 1-2-3 seventh and pitched around errors in the eighth and ninth. Veteran catcher Dustin Ritchie helped him stay calm.
“I didn’t ever shake him off — just trusted whatever pitch Dustin called,” Strickland said. “I kept the ball low, located the fastball and mixed in enough curves to keep them off balance.”
The moment of truth for Strickland was the last batter he faced. Caldwell had two on and two out in the ninth and sent No. 3 hitter Trent Wakefield, who had a two-run double against Scruggs in the fifth, to the plate as the tying run.
“They had a lot of great hitters, but that last guy was the scariest of all,” Strickland said. “What I was thinking was that if I made a mistake, he could tie up the game with a home run.”
But Strickland didn’t make a mistake. Wakefield hit a groundball to third baseman Juan Garcia, who made a nice pickup, stepped on the bag and kept Rowan unblemished in a pressure-cooker tournament.
Rowan plays High Point Tuesday at 1 p.m. (and 7 p.m. if necessary) for the state championship.
Scruggs and Strickland won’t pitch Tuesday, but they have the satisfaction of knowing they did their jobs and did them well.